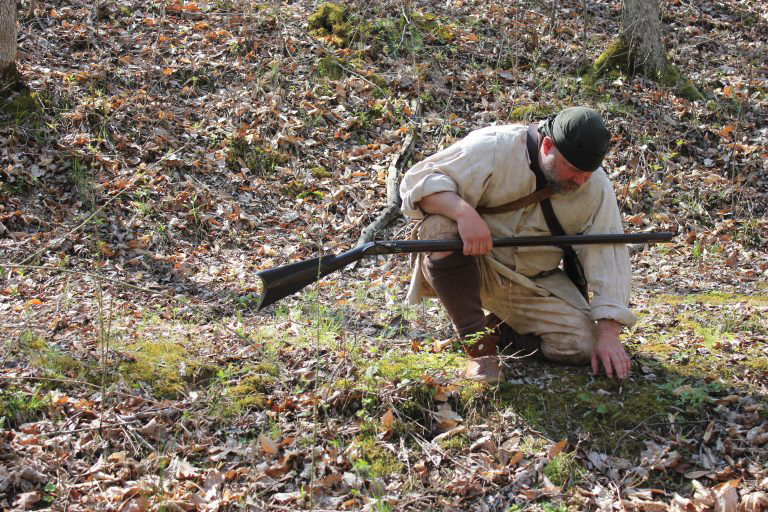 I remember reading about Daniel Boone when I was younger and being in awe of his skill as a woodsman.  There are many things that Boone did that were notable.  There is one that stands out to me, and I doubt that it ranks very high with anyone else.

It was the event in which he and other woodsman tracked down the Native American’s that captured his daughter and the Calloway girls.

While many know of this famous story, the part that stands out to me is the fact that he tracked them.  From the banks of the Kentucky river near Boonesborough all the way just east of modern-day Sharpsburg.

He and his fellow frontier scouts accomplished this feat in approximately 20 hours of daylight available to them.  Think about that for a moment.  Sharpsburg,is not just around the corner folks.

That ability to track is remarkable.  For many years I thought it was actually miraculous.  That was, until I started training in earnest, to track.

There are several ways to look at tracking and sign awareness to development an ability to recognize more of what is going on around you in the outdoors.

One, is to note that there are several different types of sign.  Ground sign is what most think of when they think of tracking.  As it’s name applies, it is sign that appears on the ground.

Things such as whole or partial tracks, broken or bent vegetation, leaf creases, debris transfer and much more are all things that Boone would have used to find the clues that he needed to follow the girls’ captors through the area.  With so much experience he would most likely have been able to know how many captors he was dealing with, if anyone was injured, and if they were traveling fast or slowly based on ground sign alone.  Another type of sign is aerial sign.  This type includes broken cobwebs, water missing from leaves, broken or overturned branches, tall grass that was pulled together and again much, much more.  We teach federal law-enforcement these same tactics when they engage in fugitive apprehension.  It is an old skill that still has modern-day use for many law-enforcement and military personnel.  Last but not least, is what I refer to as intangible sign.  Intangible clues are those that may not be directly in front of you or may not be things that have left any sort of “mark” during passage.  Things like deer snorting, squirrels barking, bird alarming, and other natural occurrences will tell the tracker that something is amiss.

A good tracker knows all this (and a whole lot more).  When a tracker such as Boone was in the business of overtaking the raiding party in hopes of rescuing the girls, he did not only had to track them.  He would have also made his way without overly affecting the natural surroundings.  If he had done so it may have alerted them to him coming in.  If he did alert them, the captors may very well fled and/or bring harm to the girls before he got close.

I learned in 8th grade from Mr. Slusher (my Kentucky history teacher at Conkwright) that all ended well for Boone and the girls.  He was able to make the remarkable trackline, in a short period of time, maybe even with some aerial and ground sign left by the girls.  If you have ever seen the movie Last of the Mohicans, when Magua and his Huron brothers are taking Cora and Alice, Cora breaks a mountain laurel bush to leave some sign that Hawkeye later finds.  The inspiration for that scene was taken from the real life situation of Boone tracking his way to save those that he loved.

Whether it be a Search-and-Rescue tracker finding a directional of travel, a law-enforcement officer finding where a fugitive threw the gun, or even a farmer finding a cow that has let the herd, tracking in the modern day is as useful now as it was back then.  I hope to see you on, or off, the trail tracking somewhere soon!