Cardinals crush Bourbon in first round of the district tournament 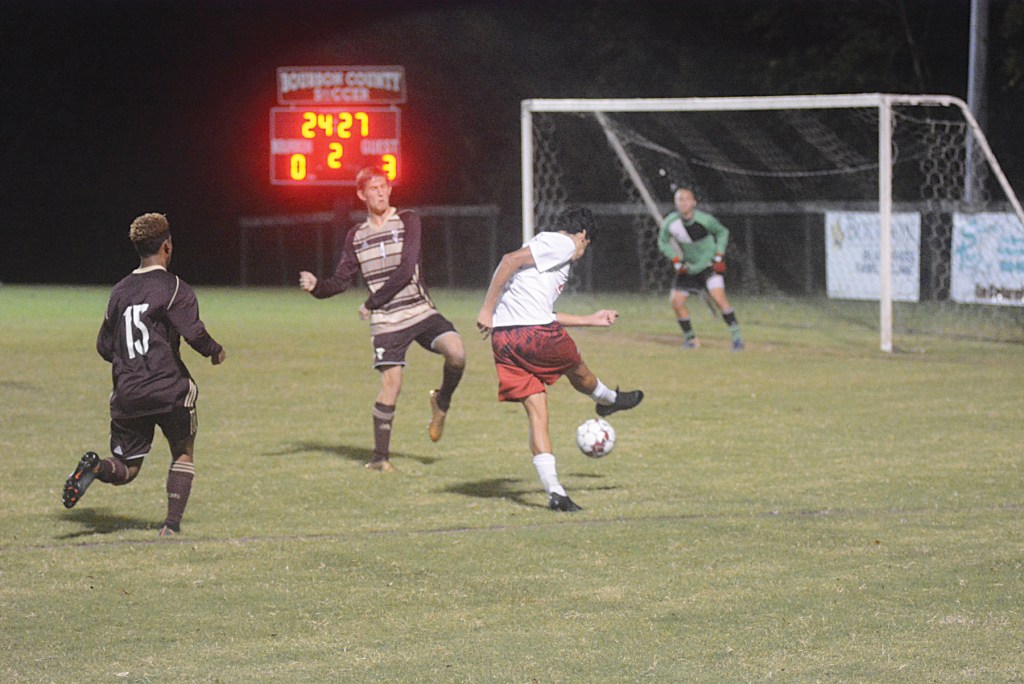 Ryan Sosa takes a shot on goal in the second half of GRC’s 5-0 first round district win against Bourbon County Tuesday. (Photo by Micah Satterly)

George Rogers Clark went to Bourbon County and stole a 5-0 victory from the Colonels on their home field.

The Cardinals lost at home between the two teams only meeting during the regular season 2-1.

Emido Piedra put the Cardinals ahead after Jonathan Stefanski have a perfect pass to Piedra at the top of the box and Piedra shot a missile past the keeper to put the Cards ahead within the first eight minutes of the game.

The Cards extended their lead with 3 mins left until halftime after Nathan Sidwell curved a shot in the top left shelf of the net without even giving the keeper a chance to save it.

The Cardinals were in full control the second half and Ryan Sosa chipped it in the goal after a Nathan Sidwell free kick at the beginning minutes of the second half.

It was a physical battle the whole match, but he game got chippy after #8 and Bourbon’s goalie collided on the edge of the box and the goalie was sent home packing with a red card.

GRC found their fourth goal of the game to go up 4-0 with 10 minutes left to play after a Stefanski header went right by the keeper.

Tyree Brown sealed the game 5-0 after slipping the ball by the keeper after a break out run.

Head coach Walt Ridener said his team played the best they have played all year at the right time.

“This is probably one of the better games we have had,” he said. “We had a plan and we stuck to it. We played more defensive than we did anything on the offensive side. It opened up the top more than I had originally suspected. These guys were able to get through the gaps and it was great. It feels good. We will go back to the drawing board Wednesday and have to change everything.”

Ridener felt like his team has not played to their full potential during parts of the season, but feels like his team accomplished that mission Tuesday against Bourbon.

“It has been frustrating because we should have been playing like this all season,” he said. “We had a big, long talk about commitment and sacrifice. I told them before the game that it either ends tonight or begins tonight and they had to make a decision. They stepped up and decided they wanted to continue playing. It feels good, but I am back to worrying about Thursday now. It is good for me for about five minutes and I am back to work.”

After losing to the Colonels in the regular season and getting their revenge in district, The Cardinals will have the same opportunity Thursday as they take on the Montgomery County Indians.

Ridener said he knows what his team is capable of doing, but they need to find the consistency in their game that they have been searching for all year.

“Montgomery is a beast within itself,” he said. “Coach Nick Pannell always does a fantastic job over there. For some reason, he always has good teams. Towards the end of the season, we have to come in on Thursday and focus on what we do best. All I ask is that we give ourselves an opportunity to win. Hopefully we will come out and do that.”

The Cards will take on Montgomery in the 39th District Championship at 6:30 p.m. Thursday at Bourbon County.