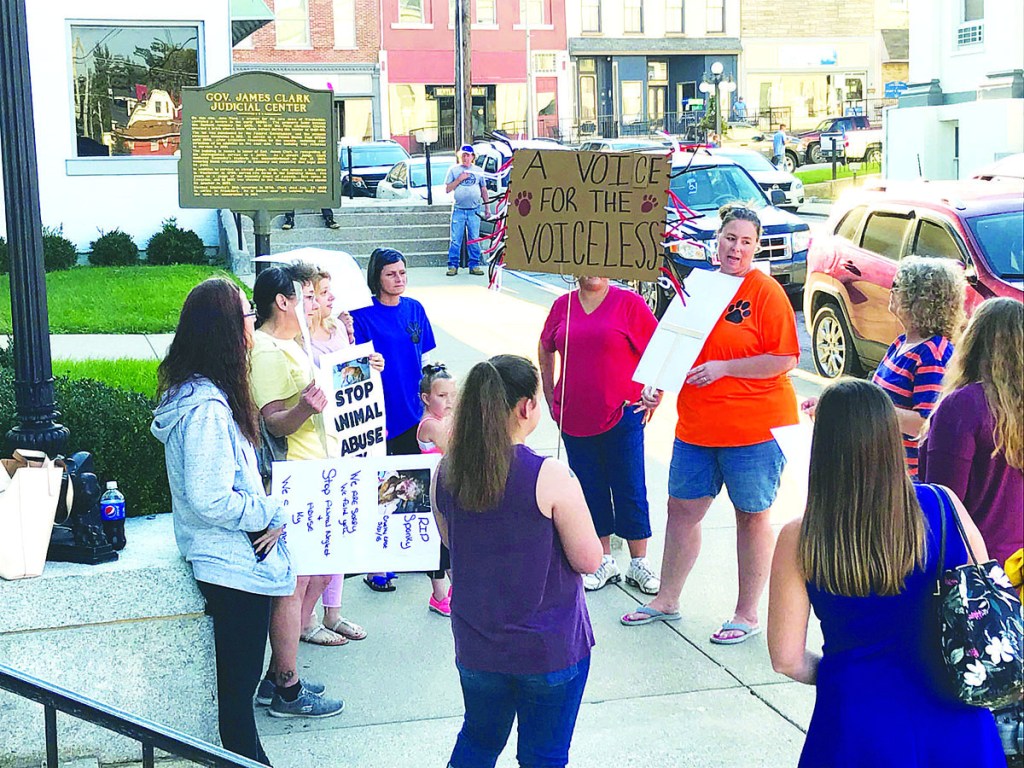 A handful of protestors waited outside the Clark County Judicial Annex Monday morning while a Clark County couple appeared in court on animal cruelty charges. They are due back in court Oct. 22. (Photo by Fred Petke)

A Clark County couple pleaded not guilty to animal cruelty charges Monday morning, as a handful of protestors stood outside the courthouse.

Holly and Phillip Brandenburg Jr., of 140 Linden Ave., were charged in September after county animal control officials removed five malnourished animals — four dogs and a cat — that were left inside a house without food or water and a neighbor complained they were abandoned.

Clark District Judge Charles Hardin entered not guilty pleas for both and scheduled another hearing for Oct. 22 at 1:30 p.m.

Neither had an attorney Monday, though Hardin said they may be eligible for a public defender.

During court Monday, Clark County Attorney Brian Thomas said they would seek restitution between $3,000 and $5,000 for the animals’ medical and adoption costs as part of the case.

The Brandenburgs also agreed to surrender the animals Monday.

Outside the courthouse annex, about a half-dozen people stood with signs with messages including “Stop animal abuse and neglect” and “RIP Sparky. We’re sorry we failed you.”

Clark County Animal Shelter Director Adreanna Wills was called to the residence on Linden Avenue on Sept. 1 to investigate complaints from a neighbor.

In the criminal complaint filed in court, Wills said she found the five animals in “terrible” condition. One of the dogs was able to stand, but the others appeared unable. The inside of the house was covered in feces and urine, and the windows were covered with boards, she said.

Monday, Wills said one of the animals remains under a veterinarian’s care, but the others are doing fine.

“They’ll be able to spayed, neutered and put up for adoption” once they are surrendered.

At the time, Wills called it “the worst case of outright animal neglect” she had seen.

The Brandenburgs are free on bond. The charge is a misdemeanor with a maximum sentence of 12 months in jail per count.