Brooklyn Johnson continues to save the day 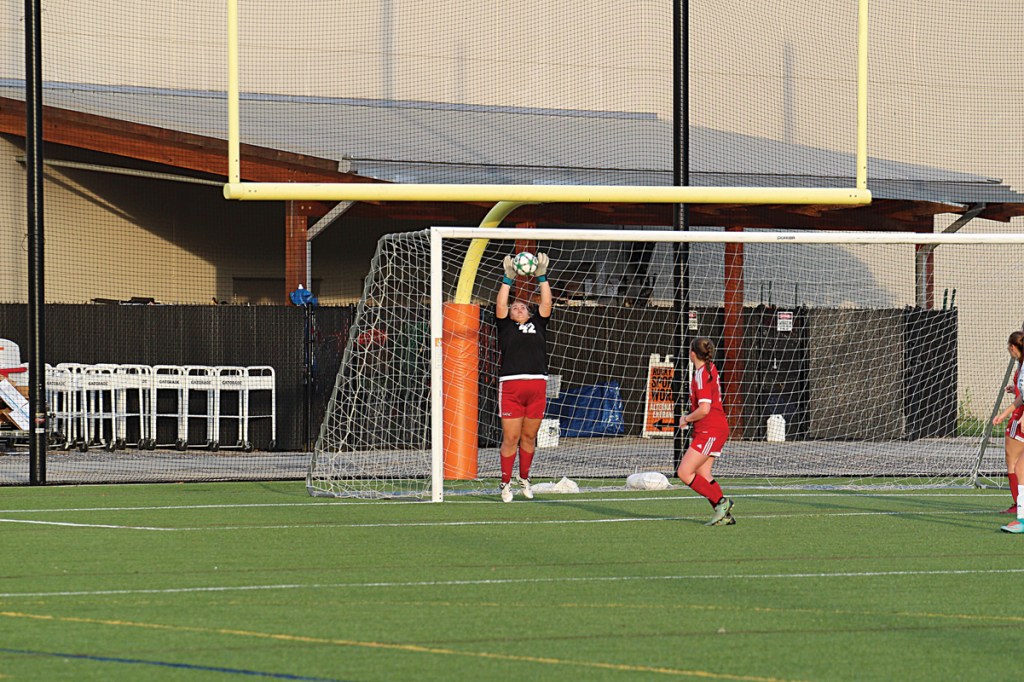 At one point in the season, Brooklyn Johnson was ranked eighth in the state for saves. (Photo submitted)

A very important part to winning games in soccer is scoring goals, however, stopping goals are just as important.

Senior goalkeeper Brooklyn Johnson sees the field in a different perspective than the rest of her team.

She has strapped up her cleats to play soccer for 13 years.

This is her first year as a varsity starter, but she has been a major contributor to as of why the Cardinals have a 11-7 record, sitting in second in the standings of the 10th Region and heading to the 39th District Championship for the third year in a row.

Johnson has seen a mixture of everything this season.

From 11-1 victories against district rivals and a 6-0 loss to the then number one ranked team in DuPont Manual.

Johnson said she was never expecting to play goalie, but got put in the game due to desperation and fell in love with it ever since.

“Our goalie got hurt on my indoor team,” she said. “My coach said, ‘Brooklyn, you are tall. Go get in there.’ I have loved it ever since.”

Johnson admits the struggles of one-on-one situations and shots taken at her are difficult to deal with.

Johnson said in penalty kick situations or in one-on-ones she observes her opponent’s movements, fatigue and many other aspects to help give her an idea of where the ball might go.

“During a penalty kick I look at their body position,” she said. “I see where they are looking, how their hips are turned and their feet are turned. It is basically a 50-50 chance and I just pick a side. It is very low for a keeper to save it, but when the player is shooting you have to position yourself to save the ball. It is just you and the goal.”

Johnson said goalkeeper is a hard position, but encourages any young player who wants to get in the net and block shots.

“I would tell them to go for it,” she said. “Give it your all because that is what I had to do and that grew my love for it. It is a hard position, but if you work at it you will be great. The more practice you have will lead you to become better and you learn more skill from older players.”

Johnson said one of her most memorable saves of her career actually occurred earlier this season.

“It was on of our earlier home games,” she said. “It was actually a one-on-one. The ball was at the top of the box and I came out as she shot and I just got it. I do not know that happened. I went back in film to record it and I just thought it was so amazing.”

Johnson said her team will have to play together and continue to grow together to repeat as champions.

“We need to grow together,” she said. “One of our biggest goals is to become a team. If we do that off the field, then we will grow more on the field. We will talk, pass more and connect a lot better if we become a family and a team.”