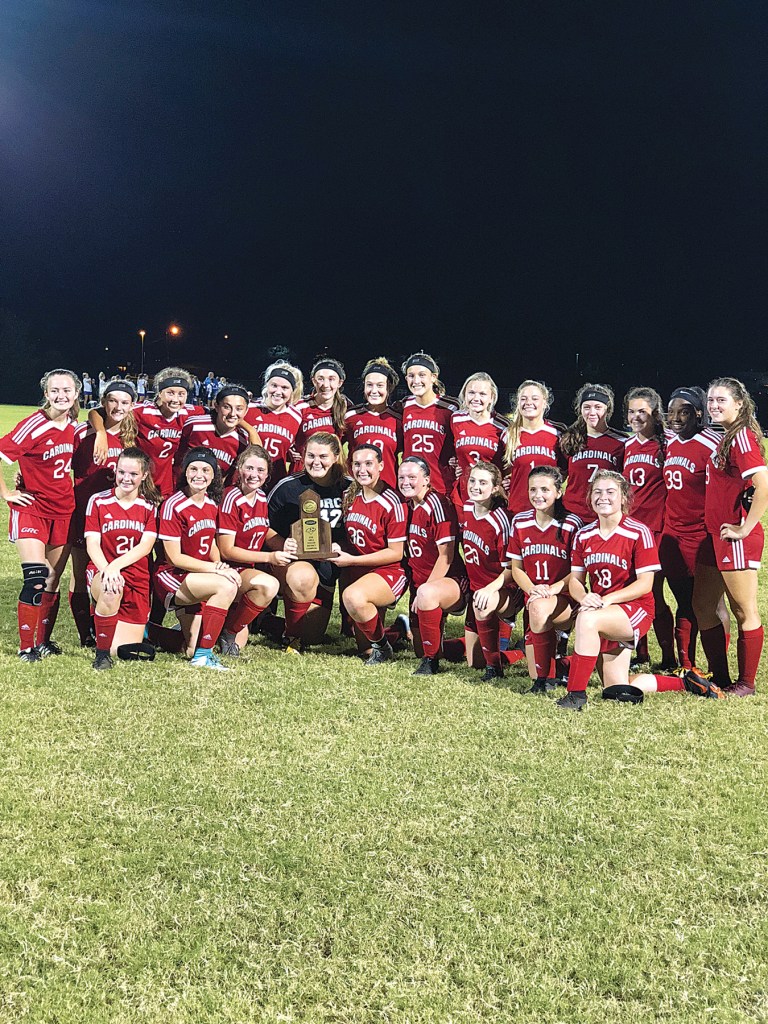 George Rogers Clark has repeated as the 39th District champions for the third year in a row as they tore apart Montgomery County 5-0.

GRC started the action early has Allie Bush found an opening in the first four minutes of play to sink the first shot of the game.

The Cardinals found their second goal as Shelby Vaughn slipped a pass to Bush who managed to slither her way past the back line of the defense.

With a defender on her hip, the goalkeeper sprinted out in desperation and caused a loose ball.

Carlie Fike gained control and sent it to the middle of the net to extend GRC’s lead 2-0 with 30 minutes still left to play in the first half.

Leslie Hernandez found Talen Spargo on the wing and Spargo dribbled to the top corner of the box and drilled a shot that went right by the keeper to stretch the lead 3-0 with 15 minutes remaining in the first half.

The fourth goal came from Vaughn as Kendall Barnes passed it to her in the middle and, once again, the keeper had no chance at saving it within the last few minutes of the first.

Nicole Davis scored the Cards’ fifth goal in the early minutes of the second half.

Hernandez shot a rocket from outside the box and the keeper deflected it without being able to gain possession.

Davis controlled the ricochet and had an open shot to put it in the net.

Montgomery’s only clear chance of scoring was with less than a minute to play and goalie Brooklyn Johnson stretched out to make the save.

Senior defender Taylor Kelly gave the credit to her team’s preparation for the big game.

“We have had some good practices lately,” she said. “Those practices have led to our skills improving every day. Our leadership is great and we have worked really hard for this moment. We definitely deserve this.”

Kelly and the other seniors have the experience and knowledge to understand what it takes to get through the region and become the 10th Region champions for the third straight year.

Kelly said the team’s mentality is the first path on the road to another championship.

“We need to have good practice, good work ethic and positive attitudes,” she said. “Those three things are what is going to make us a good team. We have to stick to the game plan and stick with each other no matter and it will all fall into place.”

Kelly said throughout the ups and downs of the season, she has been impressed with her team’s effort in the latter part of the season.

“We just need to keep pushing through like this,” she said. “We always come to play in the second half and it has not always been the whole game. We know that we need to get it done as a team and I think we can do it.”

Kelly said she will motivate her team and the other seniors to bring out the leadership in hopes to extend their season a few more weeks.

“I am a senior and from here on out could be the last time I am on the field,” she said. “I have to know that this our time and we have to keep pushing.”