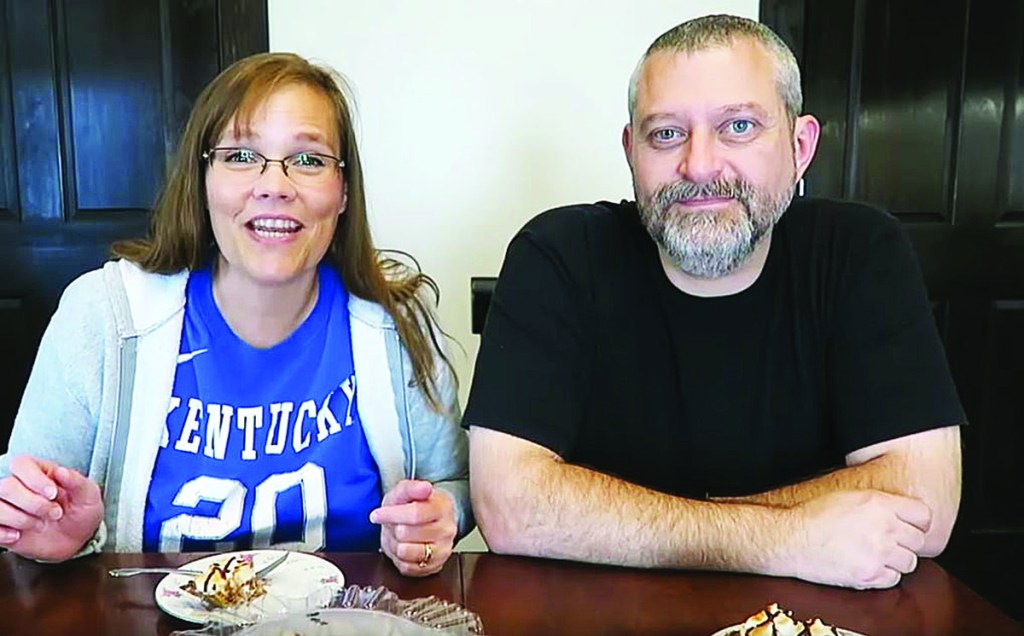 A screenshot shows Tami Dunn and her husband Kevin as they review the Edwards Desserts’ s’mores pie on her YouTube channel.

Tami Dunn grew up in Winchester and on Edwards Desserts’ pies.

She’s tried every pie Edwards has made except for one — a limited edition mint pie she wasn’t able to get her hands on or fork in.

For five years, Dunn has been filming food reviews and daily vlogs on YouTube. There her subscribers can see her love for Edwards pie. And this year, Edwards has noticed, too.

She has an entire playlist of videos about Edwards, which was founded in Atlanta in 1950 and bought by Schwan’s Co. in 2001.

In honor of Dunn, Edwards Desserts is giving away free pie from 1 to 4 p.m. Saturday on South Main Street in Winchester.

Edwards Desserts will take over Winchester with events featuring interactive games, live music and complimentary slices of Edwards creme pie as Dunn enjoys the day as the guest of honor, according to a press release.

The plans have been in the process for months, but Dunn said she was excited when she no longer had to keep it under wraps.

“I’m just so excited,” Dunn said. “We have a beautiful downtown and brand new clock tower. I’m excited to show off the town, excited for (Edwards) to see downtown Winchester, and how pretty it is; it’s clean. I’ve lived here all of my life, and I want them to see how Winchester can support its own.”

Edwards’ Winchester stop is the first event to launch the “Edwards Desserts Town Takeover” holiday contest which is open to all dessert fans through Oct. 31. Edwards will treat the contest winner to a takeover of their hometown in December.

Dunn makes her living on Youtube. It’s her day job — her business. She earns income from the views she gets on YouTube. She started about five years ago, and now makes at least three videos a day.

“If there’s something new, I try to get it out quickly,” Dunn said.

For example, Toaster Strudels recently came out with Cinnamon Toast Crunch and Trix flavors,  so Dunn tried to have those videos up the same day.

“(My husband and I) will try to come home directly from the store and immediately get it up online because I know people want to get in on it,” Dunn said.

Her channel has a little bit of everything — old home movies, vlogs, box openings, assembling things, craft projects, taste tests, reviews, grocery hauls and more. Dunn even posts about her meals on “What I Ate Wednesdays.”

The majority of her videos are food reviews which she usually pays for out-of-pocket.

She often films alongside her husband, Kevin Dunn, who also has a YouTube channel, Lunchtime Review. Kevin has more than 10,000 subscribers and about 3 millions views on his channel, where people tune in to see him chow down during his daily lunch break at Bluegrass Community and Technical College.

According to his channel, he eats everything from fresh, frozen or processed food. He’ll buy and try anything.

Tami said she does all of the behind the scenes work.

Dunn will spend the rest of her day in front of the computer, editing videos, resizing photos, writing descriptions and more.

Dunn said she also likes to make fun videos where she and her family purposely try disgusting food products such as Beanboozled. But regardless of the product, it’s all about honesty.

Dunn said it doesn’t matter if she bought the product, if it was sent to her by a company or if a friend got it for her for Christmas, she will always be honest. And that’s why she’s successful, Dunn said.

Dunn’s YouTube channel now has 46,000 subscribers and has had more than 27 million views.

“It means a lot that people have liked me enough that they have clicked that subscribe button,” Dunn said.

Dunn’s most popular video is one where she and her family attempt to make fried ice cream, reminiscent of fried ice cream she used to order at a late Lexington restaurant. It has more than 1.8 million views. Dunn said she thinks people were just curious about how to make it.

Some of her other popular videos include a renovation of her childhood home and a how-to video on two-ingredient peanut butter fudge.

Dunn said she doesn’t remember when exactly she first started watching YouTube, but she was inspired to make videos after following a family’s daily vlogs.

“I thought it was fascinating,” Dunn said.

Dunn thought maybe people would be interested in her life and what’s happening in Central Kentucky.

Over the past five years, Dunn said the quality of her videos has improved, and she’s expanded the types of videos she does as well, but she will continue reviewing foods, especially interesting and new products.

Dunn said she’s kept going with YouTube primarily because of the relationships and friendships she has made through her channel.

“I built a lot of relationships through YouTube that I never expected,” she said.

Dunn even met some of her online friends in London a few years ago, and she has standing offers to visit from her friends in Ireland, Australia and more.

“I feel like I could go anywhere and I would know somebody,” Dunn said.