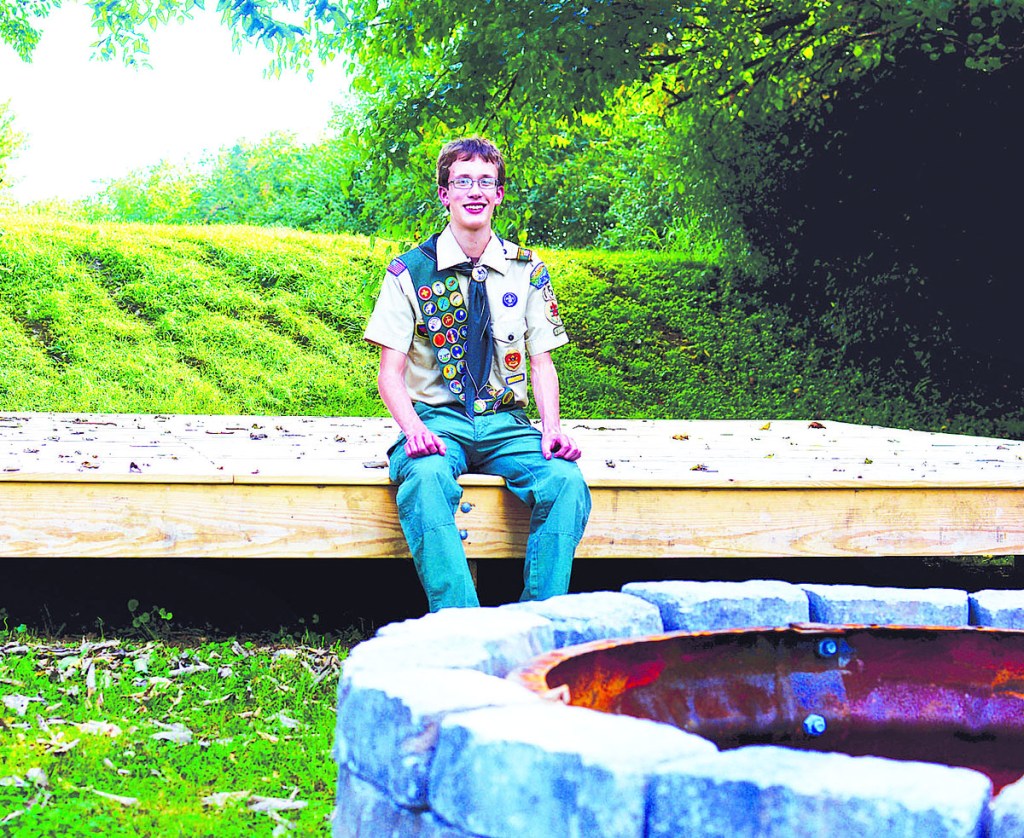 His father had been a Boy Scout, and Carpenter liked the idea of earning badges by learning new skills — skills he wouldn’t learn in a traditional school classroom. He also enjoyed camping and spending time outdoors; the Boy Scouts of America organization was a perfect fit for him.

“I’ve always had fun being outside and spending time in nature,” Carpenter said. “And when I heard we got to go sleep outside in tents, I was like, that’s what I want to do in my free time.”

Carpenter, 17, is a junior at George Rogers Clark High School. He likes to draw, build with Legos and do anything art-related.

But come 1:30 p.m. Saturday, he will celebrate his culmination of efforts he has put forth as a Scout over the past nine years when he becomes an Eagle Scout.

In September, Carpenter went before the Eagle Scout board of review, fielding questions about why he should be awarded the highest and most coveted honor in all of Scouting.

“I had to answer their questions and talk to them,” Carpenter said. “And they determine whether or not I’m worthy of being an Eagle Scout. And that’s when I got my title of an Eagle Scout. But this weekend is where I actually get the badge, and I’m pretty much 100 percent legitimate.”

Months prior, Carpenter, who is part of Troop 75, had been working on his Eagle Scout project, an outdoor theater at Calvary Christian Church. He finished the project in late summer.

“I do it because it’s something not many boys my age can experience,” Carpenter said. “Not many kids my age are interested in that kind of stuff. It’s kind of like sports to some kids. It’s what I like to do, a lot of times in my free time. It’s something I’m passionate about.”

Carpenter said he has learned a variety of skills as a Scout. He’s learned how to build a fire and set up shelters with sticks and leaves; he’s learned about game design, citizenship, entrepreneurship, business, cooking, family life, robotics and more.

In all, Carpenter has earned about 31 merit badges.

Personal fitness and personal management were the toughest badges to earn, Carpenter said.

“Both of those involved a three-month schedule where I had to plan and keep track of what I was doing,” he said.

The other important aspect is the Eagle Scout project. Carpenter said he had to create a proposal and lead a team to execute it.

“I chose a sort of amphitheater or outdoor theater for Calvary Christian Church and school because I’ve always come here,” Carpenter said. “I grew up in this church. And I wanted to give back, so I built a stage fire pit, and probably eight benches with the help of others who are involved in this church and my Boy Scout troop.”

Carpenter said he initially asked the church what they needed and one of the requests mentioned an amphitheater.

“The amphitheater stuck out to me,” Carpenter said.

Carpenter said he hopes the church and school can use the space for various programs. Carpenter had most of the wood and other materials donated.

As an Eagle Scout, Carpenter said he’s going to make the best of his last year in the troop as he turns 18 next year. Though he plans to come back and help lead the troop, Carpenter said he would especially miss the camaraderie and the campouts.

“Most of the time, it ends up just us goofing off, having a fun time,” Carpenter said. “But sometimes we do have to get serious and teach some of the younger Scouts skills. But a lot of the times, it is just a lot of fun, hanging out and playing games.”

One of the campouts, the Monster Mash Pumpkin Bash, is coming soon, and Carpenter said he looks forward to it all year. During the campout, the Scouts attempt to smash trailer loads of pumpkins any which way they can — shovels, pitchforks, trebuchets.

Carpenter encourages others to join Scouts.

“It’s not only a place where you can meet new people who are like you and enjoy the same things you do, but you also get to learn things that you don’t learn in school,” he said.

Being a Scout isn’t who he is, but it’s what Carpenter strives to be every single day.

“We have an oath that we say every week,” Carpenter said. “It’s called the Scout law, and it says everything that the Scout should be. And it starts: a Scout is trustworthy, loyal, helpful, friendly, courteous, kind, obedient, cheerful, thrifty, brave, clean and reverent. And I don’t think being a Scout means one thing to me; I think it encompasses all those things.

“That’s why we say that every week. I think that’s what being a Scout means, that I am supposed to be all those things. I’m supposed to be an example for others, to help show what should all be.”