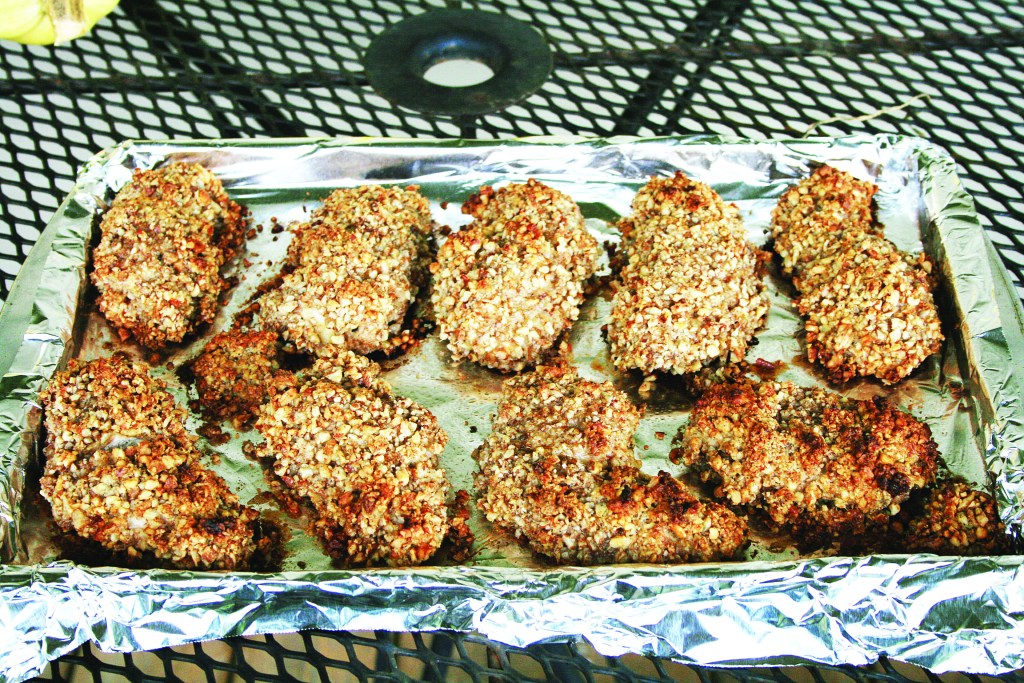 It seems as soon as we have supper and I clean up the kitchen, I’m already wondering what to have for supper the next night. It’s always the million-dollar question.

Our freezer is full of meat, but it’s always a chore to decide what we are going to have. Many times I just open the freezer and pull something out and then head to the stack of recipes I’ve collected over the years to decide how I’m going to prepare the meat I’m thawing.

That’s exactly what happened when I stumbled upon today’s recipe for” Low Country Pecan Chicken.”

As I opened the door to the basement, I asked if Brad had any suggestions for supper the next night. He didn’t, so I opened the freezer and stood there looking, trying to decide.

I finally just grabbed a package of chicken breasts.

I decided on today’s recipe just because I had all of the ingredients it called for. It sounded fairly quick to prepare too. I’d torn the recipe out of some magazine. The recipe was part of an advertisement for Gold Kist Farms Young’n Tender Chicken.

— 1/4 teaspoon cayenne pepper, or to taste

Pour buttermilk in another dish.

Place pecans in food processor or blender and pulse until nuts are chopped into small pieces; spread in shallow dish.

Dredge each chicken breast in flour mixture, shaking off excess. Dip in buttermilk, letting excess drip off, then place in pecans, coating both sides.

Bake in preheated oven 20 to 25 minutes or until no longer pink inside.

When I got home from work, I cleaned the chicken, cut each breast in half and set it aside.

I mixed the flour, lemon pepper and cayenne in a small bowl then poured buttermilk into another bowl.

I measured the pecans and crushed them in my blender, then put them in yet another bowl.

I turned the oven on and lined a sheet pan with non-stick foil (non-stick side up of course) and was ready to start dipping the chicken.

I dipped the first piece in flour mixture then in the buttermilk then into the pecans.

To get the pecans to stick I had to press them onto the chicken a bit, which wasn’t too difficult. Then I placed the chicken on the pan and started over with the next piece of chicken.

Before I coated all of the chicken, I had to crush up some more pecans. Maybe pressing them onto the chicken made me use more than I should, but by the time I was done, each piece was coated well.

I baked the chicken about 30 minutes, just because I like my chicken well done.

It smelled good when I opened the oven door to take it out.

Brad said a prayer and we dug in.

After a couple of bites, I decided even though the chicken was good, it could use a little salt. I sprinkled some on mine and Brad followed suit. We both agreed a little bit of salt did help the flavor.

Brad’s only other comment was that he would have preferred the pecans be chopped a bit finer.

This chicken was so good it was hard to stop eating it, even though I was full. After one-and-a-half pieces, I stopped, leaving plenty for another meal.

We had the pecan chicken again the next night and it was just as good the second time as it was the first.

I definitely nailed this recipe and it’s headed to my self-made cookbook with a note to add a bit of salt and maybe even double the lemon pepper and cayenne just to amp up the flavor a bit.