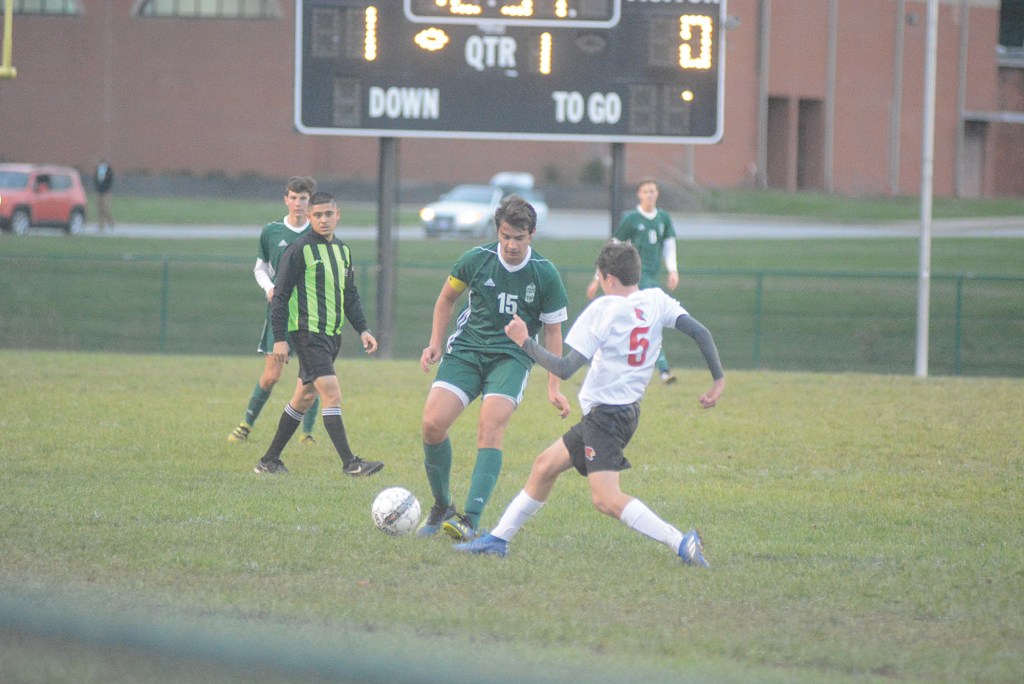 Carter Smith (5) lunges at the ball to take it away from a Bishop Brossart player in GRC’s 3-0 loss in the 10th Region tournament. (Photo by Micah Satterly)

George Rogers Clark traveled to Pendleton County for the 10th Region tournament to face the Bishop Brossart Mustangs and left with a 3-0 loss to end the season.

The Mustangs controlled possession of the ball for a majority of the first half.

After having a shot hit the crossbar, the next time Bishop went down the field they finally sent the ball past the goalkeeper to take a 1-0 lead just under 14 minutes in the first half.

Bishop threw the ball in from the sidelines straight into the box and another player nearly bicycled it in without letting the throw- in touch the ground.

GRC had one of their very limited opportunities to score and even the game after the Cards managed to get behind the defense.

Nathan Sidwell passed it to Emido Piedra in the box, but Piedra put too much power on the shot and the ball went over the crossbar.

Bishop found their second goal of the night with 15 minutes left to play.

The Mustangs took a free kick from 30 yards away from the goal and the ball slipped through a couple of Cardinal defenders and Bishop tapped the ball in the net.

The Mustangs sealed the game with their third goal by a corner kick that goalkeeper Tayman Hayes had originally saved, but the ball slipped through his hands with under five minutes in the game.

Head coach Walt Ridener said the Cards did not come prepared to play.

Ridener said although Bishop maintained possession almost the whole game, the Cards’ game plan was to focus more on the defensive side.

“We wanted to be more defensive tonight,” he said. “That is what we changed in the last part of the season. If they maintain possession, then I am fine with that and we are good. At some point we were going to try and throw another attack at them. We knew if we got one goal and bunkered them then our chances are much better to win the game. I would have even been fine with penalty kicks. It was fine when the ball stayed in front of us, but when it got behind us is when we got scored on.”

Ridener said his team’s lack of experience has been the story all season.

“It has been the absolute issue all year,” he said. “We had one starter return from last year’s team and that was Trystan Hayes. Other than that, everyone came off the bench. The only other person that got significant time was Ryan Sosa. The rest of them never saw the field and Jonathan Stefanski was out with injury all of last year. Nathan Sidwell had an injury most of the year, too. Everybody else was playing JV as sophomores.”

Ridener said the process of losing key players and seniors each year never gets easier.

“It is a hard thing to do,” he said. “We talked about how quick this year went. Freshmen, sophomores and some juniors do not really understand that it goes quick. When it is over, it is over. Trystan signed to play somewhere, but as far as playing organized soccer goes, they probably will not ever do it again. They will not ever be on the field together as a unit again. I remember my last year walking off the field during tournament time. You always remember it no matter how old you are.”

“You just don’t forget about it,” he said. “I carried our first round district loss to Bourbon County from last season all year. What I do normally is try to focus on family and work and other things to get my mind off of it until January when we start conditioning and weight training. There is no relaxing with this job and you worry about all the mistakes you made and things you could have done differently. You wish you could have done something different and you carry that with you all year.”