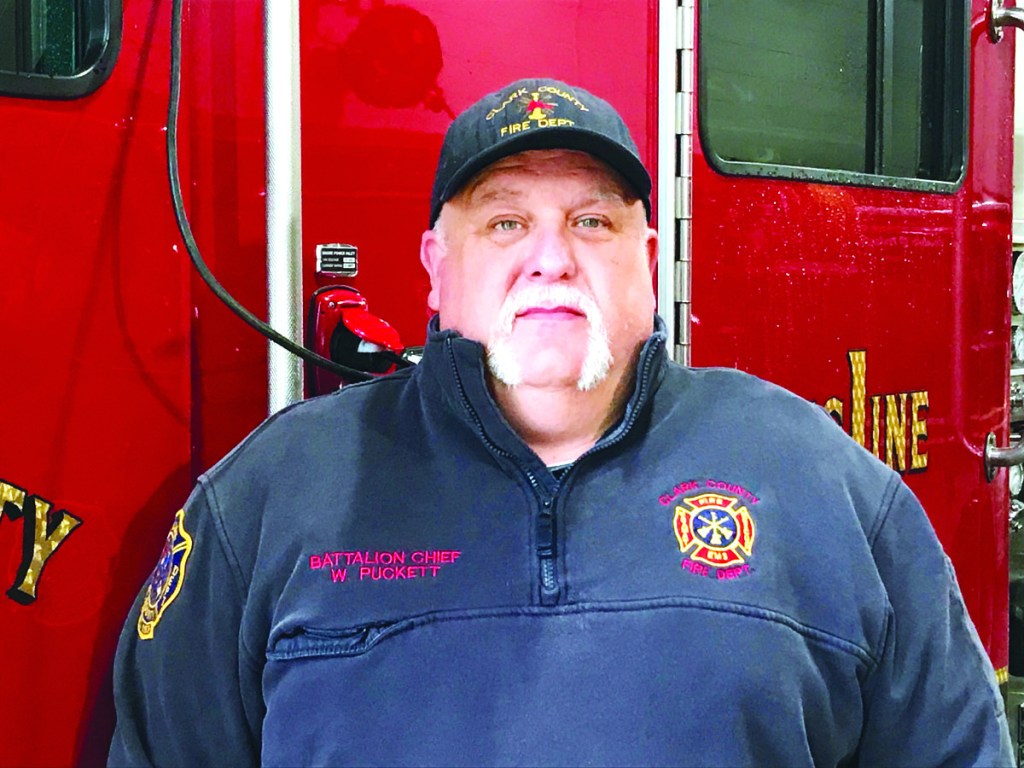 Clark County Fire Department Battalion Chief William Puckett spent a lot of time around the fire station before he ever decided to join full time.

“I started hanging around here when the McCord brothers joined,” Puckett said. “I was 12 or 13 when I first started coming around the fire department. I’d ride my bicycle down here and hang out.”

Marrying a firefighter’s daughter played a role as well.

“When I started dating my wife, her father was the assistant chief at Sharpsburg,” Puckett said. “I started volunteering for them when I turned 18. I was a junior firefighter for a while and I started getting my hours.”

At the time, being a career firefighter didn’t seem like an option.

So in 1996, Puckett decided to leave the $19-an-hour factory job and the dread of driving to work every day to earning about $4 an hour as a county firefighter. Though the pay cut was massive, there were other perks like being able to retire after 20 years of service, he said.

“It was scary. My wife thought I’d lost my mind,” he said.

Twenty-two years later, Puckett has risen through the ranks and hasn’t looked back.

“There’s not a day that goes by I didn’t regret becoming a firefighter,” he said. “It’s gratifying and rewarding.”

As a battalion chief in a small fire department, Puckett is responsible for overseeing a shift of firefighters, handling a lot of the paperwork and payroll, and keeping the department’s trucks maintained and in good working order. When an emergency call comes in, Puckett rides the truck and assists where he can while keeping an eye on the overall scene.

“My job really is to get out of the truck (and) keep an eye on the structure,” he said. “I’m doing that and 10 other things.

“I’ll help pull hose. I do whatever is needed to make sure the scene is smooth. I’ll fight fire from the yard. My main job is to keep these guys safe so they can go home to their families every day.”

The best days now, he said, are when they don’t have to turn a wheel during a 24-hour shift.

“When I was younger, the best day was when we did something,” he said.

The outlook he tried to instill in younger firefighters is wanting to be ready and prepared when unfortunate things happen.

“It’s inevitable bad things will happen,” he said. “It’s not bad that you want to do it. If someone’s house is going to burn, you want to be the one to go help. They’re firemen because they want to do these things.”

The next generation is already coming along, from Puckett’s own house. Twin sons Shawn and Kevin are volunteering with Clintonville Fire Department, along with Puckett himself, to become a third generation within the family.