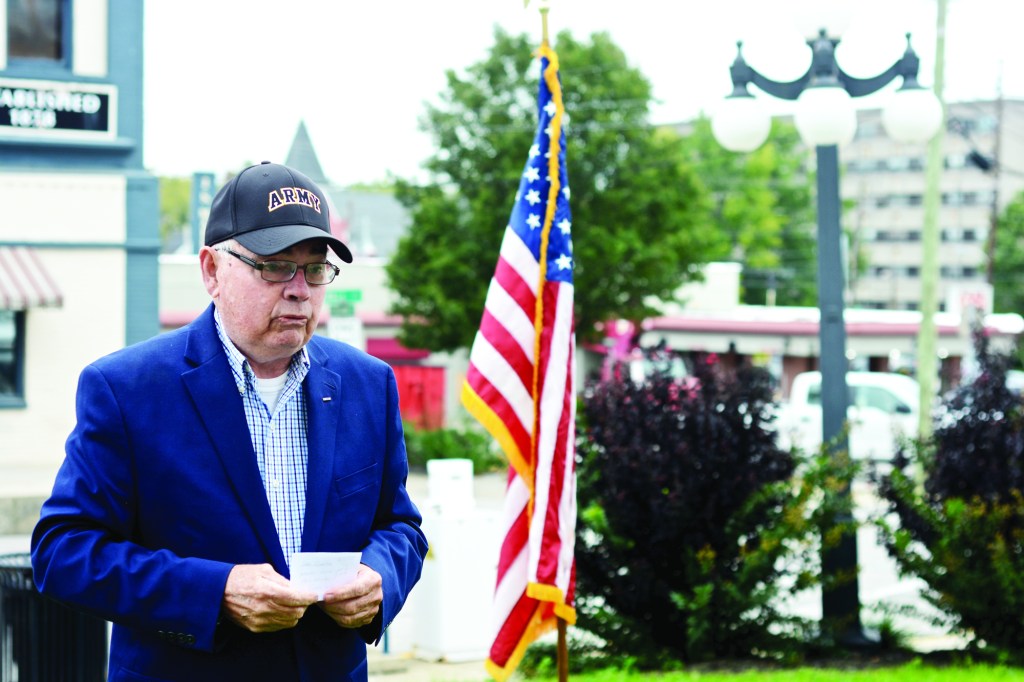 Fara Tyree of Hart Chapter DAR speaks during a ceremony recognizing the 100th anniversary of World War I Saturday. (Photo by Lashana Harney)

The Hart Chapter of the Kentucky Daughters of the American Revolution, hosted a ceremony and wreath laying Saturday at the foot of the Doughboy monument behind the Clark County Courthouse to honor the 100th anniversary and the lives lost in World War I Saturday.

Nov. 11 will mark the end of the four-year commemoration of 100th anniversary of the war.

Mayor Ed Burtner and Clark County Judge-Executive Henry Branham spoke at the event. Branham gave a snapshot of Winchester in 1918.

In 1918, the chief of police received a $300 raise, from $1,200 to $1,500; a new Ford sedan was selling for $695 at the Clark County Motor Car Company; nearly 20 Winchester residents died from the Spanish flu; the Hart Chapter of the DAR was celebrating the 10th anniversary of its founding; and on Nov. 11, the city of Winchester inaugurated a large parade of decorated motor cars which involved 1,000 machines, drawn from the city and county, to celebrate the end of WWI.

Winchester’s pressed copper statue is “dedicated to the memory of those from Clark County who gave their lives in defense of humanity in the World War,” according to its inscription.

Fara Tyree, chaplain and commemorative events chairman of Hart Chapter, said the chapter decided to host the event around the Doughboy statue because of its significance.

Doughboy was an informal term for a member of the U.S. Army or Marine Corps, but it was primarily used to refer to members of the American expeditionary forces in WWI.

Tyree also noted the families in attendance who had ancestors who served in WWI.

The monument also names men who lost their lives in World War II, the Korean War and the Vietnam War.

The Daughters of the American Revolution is a service organization that keeps the tenets of historic preservation, education and patriotism at the forefront of their lives, Tyree previously told The Sun.