GRC slips by Campbell County in overtime to advance to championship 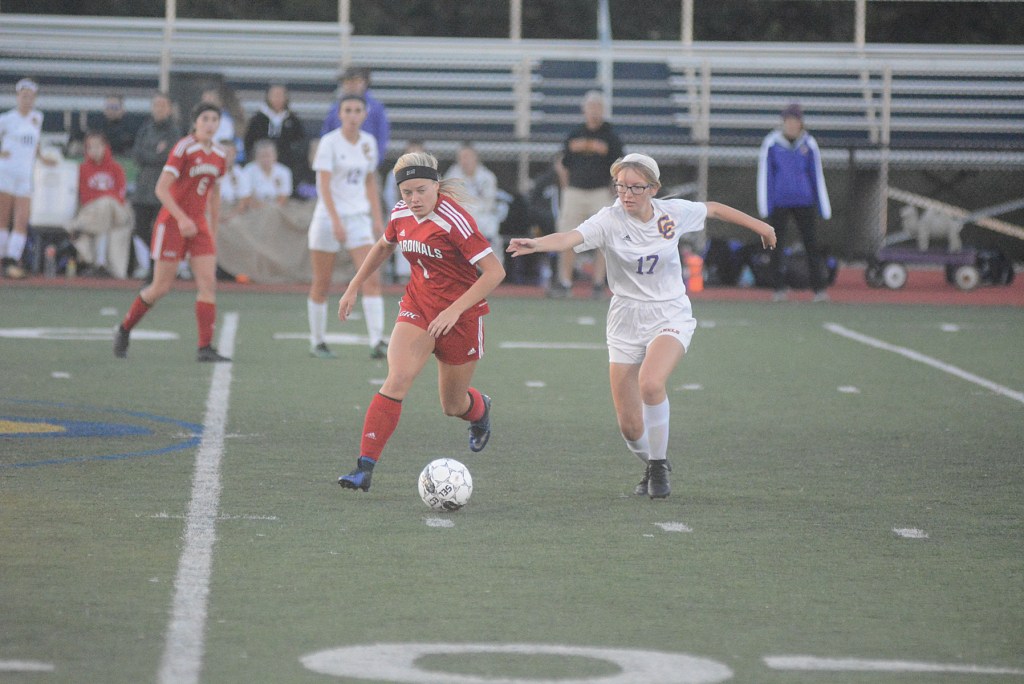 Shelby Vaughn (1) hustles for a loose ball in the semifinals Wednesday against Campbell County. The Cardinals will take on the Scott High School Eagles Saturday in the 10th Region championship. (Photo by Micah Satterly)

George Rogers Clark got a thrilling 1-0 overtime victory over the Campbell County Camels Wednesday in the 10th Region tournament.

The Cardinals will be heading to the championship Saturday in hopes to achieve their third region title in a row.

GRC defeated an experienced Campbell team who had eight seniors and five juniors.

Campbell had a chance to finish the game in regulation after they scored a goal with 16 minutes left to play, but the goal was called back for offsides.

In a game that could have gone either way, the Cards came out on top after Shelby Vaughn pushed the ball up the sideline and crossed it to Allie Bush in the middle who sent the ball in the net to end the game and help advance GRC to the championship.

Head coach Matt Abner said he was happy his team came out winners.

“Good teams always have that game where they have to battle, fight and claw,” he said. “This was that game for us. We can always hope we do not have that type of game, but if that is what it takes to win then that is what we want.”

Campbell was a physical game and with the temperature dropping drastically, Abner said his team has never given up no matter the circumstance.

“The one thing that we continue to do is battle,” he said. “We continue to improve. We probably did not play our best today, but we just endure so much and fight through. We continue to battle and know we have the offensive power to score. That is always our go-to. We know it is there so I guess our thought process is we know it is going to happen so we have to keep battling until it does.”

Abner said he told his team it only takes one goal to move on to the next round, which ended up being enough motivation.

“One of the things I told them was we only need one goal,” he said. “One goal wins the game. No matter how good, bad or what happened in the last 80 minutes. All it takes is one goal and I believe in them and support this team. There was no doubt in my mind where I thought we could not score a goal. That thought process was to concentrate on one goal and it happened.”

Abner said coming prepared will be the key to returning to Winchester with another region championship.

“I thought we were prepared for this game, but I do not think we were prepared for the physical play that Campbell brought to us. I thought they were more physical, but the one thing I keep looking back at is they had nine seniors fighting to play another game. On the other side, we only have three so I do not think we understand it as much as they do. They were fighting for the next game. When you put senior girls up on the wall, their emotions are high and they will fight you tooth and nail. They worked after every ball and I give them the upmost credit. Somehow at the end we were able to find a win. These games are always emotionally and now we have to get ready the best we can to come out and play in the championship.”