Madison Central pulls away with victory to end Cards’ streak 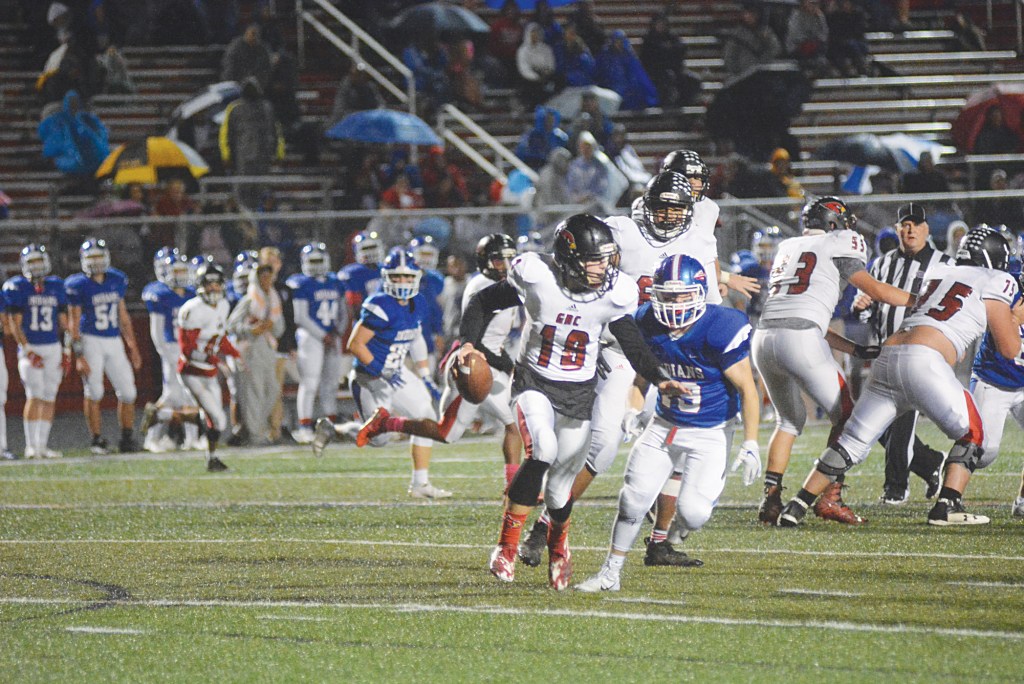 Jordan Manley (18) scrambles out of the pocket as he stepped in at quarterback in the second half Friday in GRC’s 31-7 loss to Madison Central. (Photo by Micah Satterly)

The George Rogers Clark Cardinals had their hands full as their winning streak came to an end after losing 31-7 to the Madison Central Indians on the road.

The Cardinals are now 6-3 on the season as Central improves to 7-2 with their only two losses from teams who are still undefeated in Southwestern and Frederick Douglass.

The Indians struck first after a nine-yard touchdown pass gave them a 7-0 lead halfway through the first quarter.

On GRC’s next possession, quarterback Will Henry looked to make a pass and had to scramble which led to a fumble that Central recovered.

The Indians could not capitalize to extend the lead.

A few drives later, the Cards had a chance to tie the game with the ball in the red zone but the Indians picked off a pass from Henry at the goal line and managed to pick up an extra 10 yards after the interception.

On the first play of the Indians’ drive, an 86-yard touchdown pass extended their lead 14-0 with eight minutes left in the second quarter.

After a couple dry possessions from both teams, Hunter Dunn picked off a pass from the Indians with 20 seconds left in the second to end the first half.

The Indians had unfinished business as they stretched out the lead 21-0 from a 30-yard touchdown rush at the start of the third quarter.

A field goal five minutes later added to their lead 24-0.

Six seconds into the fourth, GRC finally added points to the board after Jordan Manley hit Dawson Gay for a 16-yard touchdown pass to cut into the deficit 24-7.

Less than a minute later on Central’s next drive, a 53-yard touchdown rush by the Indians’ quarterback stretched the lead back out to 31-7.

Manley threw an interception on the Cards’ next drive to help seal the game for the Indians.

“We played really sloppy tonight,” he said. “We got beat by the better team. We did not play like we should have. I cannot tell you that the score would have been different, but it should have been closer. I take nothing away from that team, though. Madison Central was disciplined and well coached. They played hard and smart. We gave it away to them every chance we had. It is just unfamiliar territory for our kids and I cannot get them over that hump. I am going to keep working at it because I am too stupid to quit and too dumb to give up. I have to keep pressing at them. I know they want to do it, but they get to a certain point and will not believe in themselves. Experience beat us and that was a fairly good team out there.”

The turnovers and miscues on snaps was the story for the Cards Friday night.

“You are not going to have a chance against a team like that if you keep turning it over,” he said. “We had bad snaps and then when we snapped it good we dropped it. We did not execute and we do not have an excuse or anything other than we did not play good tonight and they did. That was the difference.”

GRC will have their last regular season game before the playoffs next week and Lucas said focus will be the key to bouncing back.

“We have to mentally get back in the game,” he said. “We have to get back on the saddle. We have to prepare ourselves and play hard. It is our home turf and hopefully we can defend it. Hopefully we can get rid of some of these mistakes to play like I know we can and get ready for the playoffs.”

Farris Shakadih led all receivers with six catches for 61 yards.

Dawson Gay followed with three catches for 50 yards and a touchdown.

Jordan Manley threw 4-9 for 64 yards, one touchdown and an interception.

The Cards will host Bourbon County next Friday.