Fajita recipe is flavorful, but too spicy 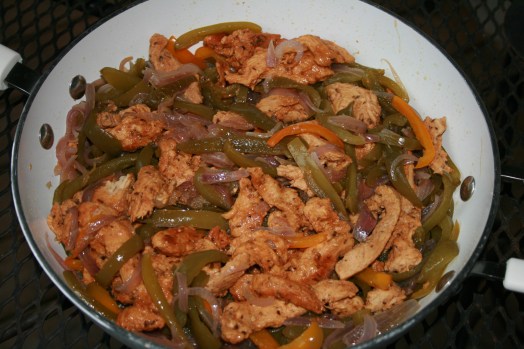 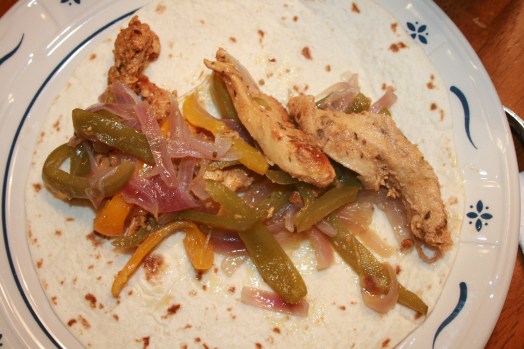 In a large skillet, sauté peppers and onions in remaining oil until crisp or tender. Remove and keep warm.

Discard marinade. In the same skillet, cook chicken over medium-high heat for five to six minutes or until no longer pink. Return pepper mixture to pan; heat through.

Spoon filling down the center of tortillas; fold in half. Serve with cheese, taco sauce, salsa, guacamole and sour cream.

Today’s recipe comes from tasteofhome.com. Green bell peppers were overrunning the garden, and this would be a way to use some of them.

When I got home from work, I put the seasonings and two tablespoons of canola oil and the lemon juice in a large plastic zipper bag. I thought long and hard about using one-half of a teaspoon of chili powder in this recipe since we don’t like spicy food.

Since this was the first time making this recipe I opted to use the amount called for; however, I did not add the red pepper flakes — they are optional, and I knew they would add too much heat for my mouth. I massaged the bag to mix the ingredients.

I cut the chicken breast into bite size pieces instead of thin strips because it would be easier to eat later. I added the chicken to the bag of the seasoned mixture and then massaged all of the pieces to cover it in the marinade.

I placed the bag in the refrigerator and then started prepping the other ingredients.

I didn’t have red peppers so I used only green bell peppers. I also used more than one cup because we like lots of peppers and onions in our fajitas.

I also didn’t have a scallion, so I used a large red onion. Again, this was more onion than the recipe called for, and instead of chopping it up, I sliced it. With this kind of recipe, you can slice, dice or julienne — whatever you want to do.

The chicken had been marinating about two hours when I decided to start cooking supper.

I heated the remaining oil in a large skillet and added the peppers and onions. After cooking them, I then poured them into a bowl and set them aside.

Even though the recipe didn’t call for it, I added more canola oil to the skillet. I let it heat for a minute then as I removed the chicken pieces from the bag, I placed them directly into the hot oil and let them cook.

When I was satisfied the chicken was ready, I dumped the pepper and onion mixture back into the pan until thoroughly heated.

I heated the tortillas and placed some shredded cheese, chopped tomatoes — from our garden — and lettuce on the table. We don’t put salsa, sour cream, taco sauce or guacamole on our fajitas.

Brad had made it home from work, and we were ready to sit down at the supper table. He said a prayer and each of us filled a tortilla with the fajita mixture.

After the first bite, we both gave a nod and continued eating. After about four bites I looked at Brad and said  “Boy, these are spicy.”

He was chewing so he nodded his head. When he was finished eating, he said “Yes, these are kind of hot.”

I talked about my decision to use the amount of chili powder the recipe called for and said that was a mistake. At this point, I sure was glad I hadn’t used the red pepper flakes. Even though the fajitas were spicier than either of us like, we kept eating.

When we finished our meal that evening, I told Brad even though the fajitas were good I would not be making this recipe again — it was just way too spicy for my taste. He agreed. He didn’t want this recipe again.

I’d say the recipe title “Flavorful Chicken Fajitas” is right on but to keep our taste buds intact I’m going to have to say this recipe is a “Failed It” in my book — but if you like spicy stuff I’d say you will like this recipe and encourage you to try it. But it’s not going in my self-made cookbook.