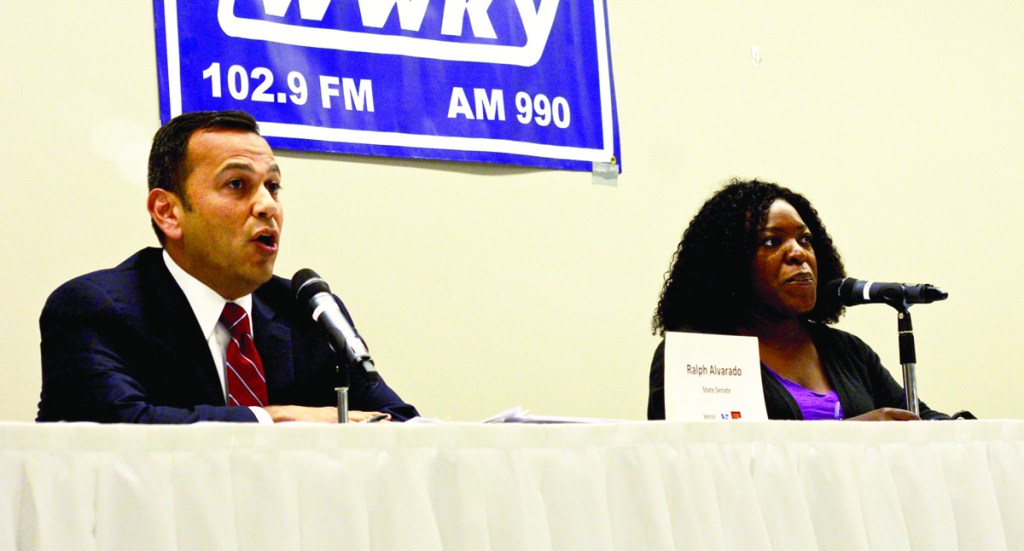 State sen. Ralph Alvarado (R-Winchester), the incumbent, and his opponent, Denise Gray (D-Lexington), answered four questions from the audience at the first night of the Clark County Candidates Forums at the Clark County Extension Office.

Concerning how to tackle the state’s underfunded pension system and regaining financial stability, Alvarado, a physician who has practiced in Clark County for 20 years, said the legislature passed a bill in the last General Assembly “that did just that,” likening the issue to a home mortgage.

“What we had before was the year-to-year mortgage that had no cap on the insurance rate,” he said. “We just moved it to a 30-year fix that we know the cost and will be able to get it paid off in 30 years.”

“We had to do something,” he said. “… In the end, what we got done was something that basically held our retirees, didn’t have any concerns or effect on them. Our current teachers, they couldn’t use any days they accumulated for sick days to enhance their salaries going forward. And we created a cash hybrid system for new teachers going in … Those new teachers, based on a 30-year rate of return, would have $720,000 at the end of their retirement and a $62,000 annualized benefit based on KTRS.

“I think what we did fixed the problem.”

Gray, who is an educator working with special needs students at the Fayette County Public Schools, focused on the way the pension reform bill, Senate Bill 151, was passed in the last session.

“I am an educator, so the pension directly affects me,” she said. “Our pension program, as it was made, was done out of mere disrespect by passing it, attaching it to the sewage bill. It’s the way you do things.

“We are not sewage as educators.”

Gray said there is a need for more transparency and new people in the General Assembly.

“We need to start thinking outside the box and stop thinking about how we’ve been doing things for years, because it’s not working,” she said. “… We need to have new people in our General Assembly who have the ability to speak to the people and not the special interests.”

In regards to improving the working class for the citizens of Kentucky, Gray said growth has been stagnant with people leaving Clark County to find work in other places.

“(That) means we have tax money that could be coming to this town (that is not),” she said. “…We need to make this place more enticing for jobs and jobs that are paying a living wage.”

She said the community needs to harness the potential from being next to an interstate.

“I think, obviously, the working class wants to see more money in their pocket,” he said. “We’ve seen an increase, I think, nationally we just saw the fourth highest wage increase in all the states in the union.”

Alvarado said creating more jobs remains at the top of his agenda, and he supported legislation that does that.

“Policies like right to work that attracted 17,000 new jobs, that’s something I’ve been working for,” he said. “That’s hardly stagnant.”

He also noted a need for more housing to attract companies to Clark County.

Gray said her top priorities for the upcoming session are to increase revenue and fully fund public education.

“We need to increase revenue into Kentucky, including right here in the 28th district and in Clark County,” she said. “That is important to me because if we have renewed income and revenue, … that will solve so many issues such as funding treatment for the opioid crisis, taking care of our roads and our bridges and funding ways we can actually reach out to the population and reach them where they are.”

“When you talk to people one-on-one, I think the opiate situation is still a problem,” he said. “Drug addiction continues to be a plague to our community and our state.”

He proposed addressing the issue with increased funding for treatment and harsher punishment for drug dealers.

“Tax reform continues to be an issue, I think … we want to continue to modernize our tax system in Kentucky,” he said. “Workforce development is also very important. You need to have people willing to do the jobs you have out there.”