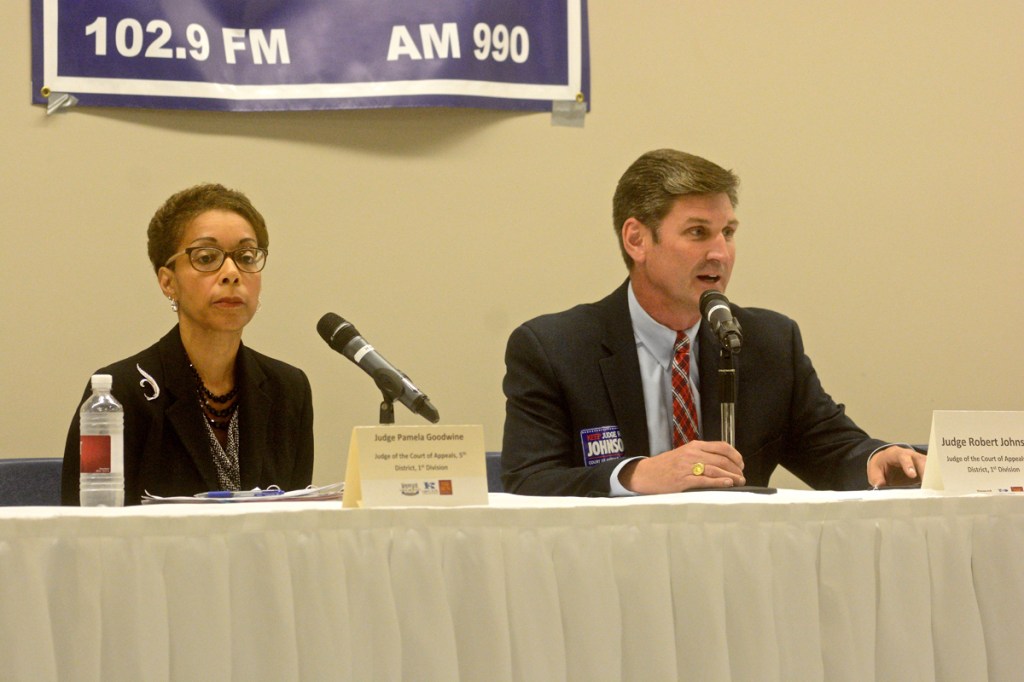 Goodwine said some of the general topics that would come through the appellate court that could significantly affect societal values might include anything from criminal justice reform to equity among litigants.

“First of all criminal justice reform,” she said. “Also… capital punishment. Although that decision is ultimately made by the Supreme Court, there are some issues that do come through the Kentucky Court of Appeals. I also think there are some issues regarding equity among litigants — those particularly who cannot afford attorneys at the lower level. Sometimes, those issues affect how we fund or how we provide resources for the Department of Public Advocacy or Legal Aid of the Bluegrass and other resources that would let litigants have the ability to actually have access to justice.”

Johnson said it is important for voters to consider the candidate who shares their values and also made a statement about the Court of Appeals’ role in death penalty cases.

“The Court of Appeals does not normally handle death penalty cases,” he said. “Those cases would normally go from the trial court to the Kentucky Supreme Court (which) gets those cases when they’re 20 years or more straight from the trial bench.”

He said issues could involve Second Amendment rights, and noted a recent Court of Appeals case regarding whether a Lexington-based T-shirt business should have to make shirts for LGBTQ+ causes.

“It could be a situation like they had in Lexington where there was a Hands On Originals case where the decision was whether the T-shirt company should make the T-shirts,” he said. “It is important that you all … elect someone with your values to the Court of Appeals.”

In regards to judicial temperament, Johnson talked more about the type of work the judges do. He noted trial judges spend more time on the bench, but Court of Appeals judges spend significant time researching cases and case law.

“I would say over the 12 years I was a circuit judge, I had a pretty good judicial temperament and got along well with each of the litigants and the attorneys that were in my court,” he said.

Goodwin noted that a judge’s temperament should always be respectful — on and off the bench.

“Judicial temperament does not only come into play in the court room,” she said. “It is what we exemplify every day of our lives in every aspect of our lives… Every day of our lives, everywhere we go, everyone we interact with, we are representing the bench. And in all those aspects, it should be handled with dignity and respect.”

Goodwine said she could better represent voters because she has seen the judicial system from every angle.

“I have also seen it from the victim’s vantage point,” she said. “My mother was murdered and I had to deal with the judicial system. I was a court stenographer. I was a legal secretary. I was an attorney. I was a district judge and now I’m a circuit judge.”

Johnson said he has worked in counties similar to Clark County, and he understands the state’s values.

“I was a circuit judge in Bourbon, Scott and Woodford counties,” he said. “And those counties, though different … are rural and suburban very much like Clark County. I had the opportunity … to hear a lot of the types of cases that come up … just like in Clark County.