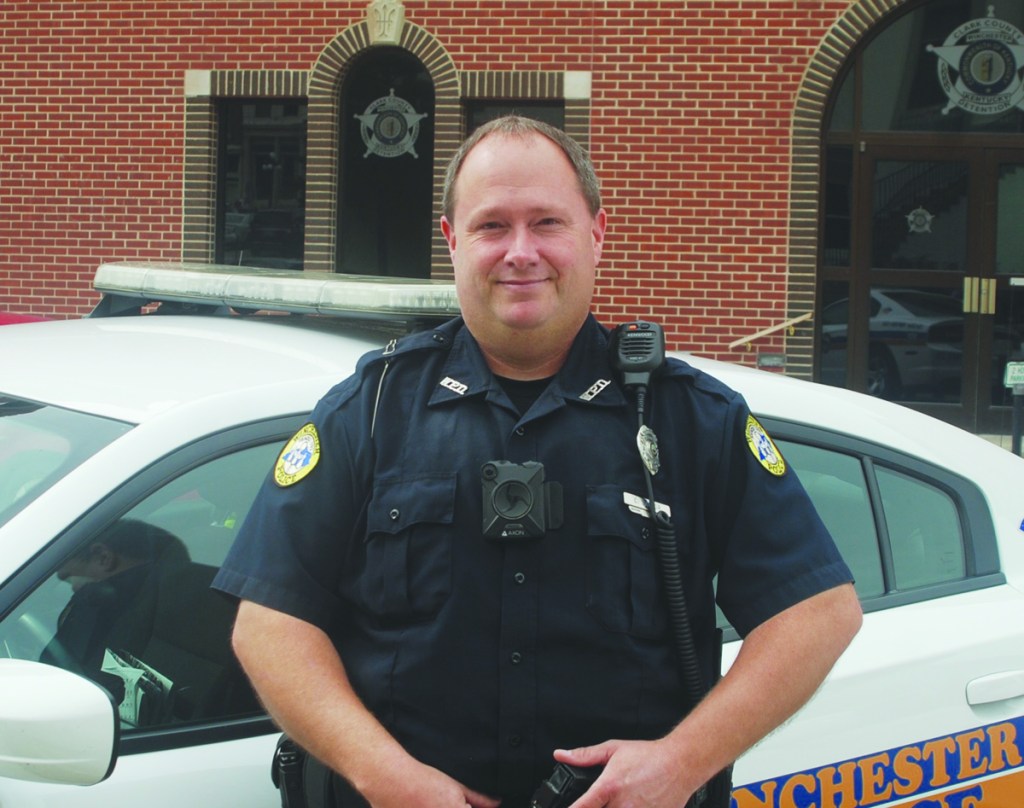 Chris Cantor is an officer for the Winchester Police Department who also has roles in other areas of the community. (Photo by Fred Petke)

You never know where Chris Cantor might pop up.

For the last 14 years, he’s been a police officer for the City of Winchester.

He works part-time at Clark Regional Medical Center as a telemetry technician.

He works at Winchester Fire-EMS as a part-time patient transfer specialist.

He’s also attending paramedic school at Maysville Community and Technical College and is doing his ride time with Winchester Fire-EMS as well.

“I like to learn,” the Winchester native said. “That’s my problem.”

Cantor said his first interest was health care and emergency medical services, but the lure of a lucrative job delayed that dream after graduating from George Rogers Clark High School.

“I worked for Pepsi for about 10 years,” Cantor said. “We made good money there, but I didn’t want to stay there 50 years. I wanted to do something different. That’s when I applied (at Winchester Police) and went to the academy.”

After starting at the police department, Cantor went back to school to become an EMT and now a paramedic.

“I always wanted to be a paramedic,” he said. “I was an EMT years ago and I let (my license) expire. About five years ago, I got an advanced EMT (license). Now I’m in school at Maysville Community College to be a paramedic. I’m almost finished.”

Becoming a paramedic is no small feat.

Wearing so many hats does cause double takes, he said, especially when working at CRMC.

“A nurse came in one day and said, ‘A patient just asked me why a police officer was impersonating a doctor,’” he said. “In the ER, (patients) didn’t mind. People would say, ‘Don’t you work at the police department?’”

Finding time for such necessities as sleep and family time is a real challenge.

“There’s times I’ll go two or three days without sleeping,” he said. “You have to fit it in whenever I can. I see (my son) every day, even if its for an hour, we’ll go eat.”

Cantor may get a bit of a break after finishing his paramedic classes and ride time. But nursing school may be in the cards for a second career after he retires from the police department.

“I can’t wait until December,” he said. “That’s when my class ends, until I find a nursing class. I’m already looking at nursing. I can bridge over.”