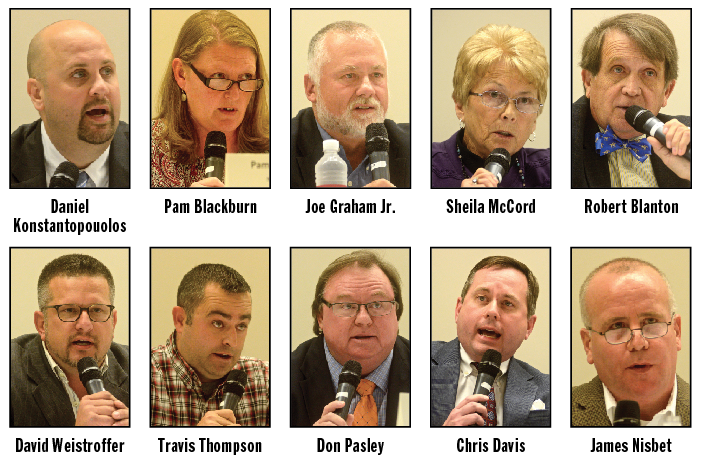 Ten candidates for five seats on the Clark County Fiscal Court took the stage Tuesday to speak about issues in the county, creating population growth and the role of the magistrate in county government.

Of the six seats on the fiscal court, one was settled in May when district 4 magistrate Greg Elkins defeated Kenneth Anderson in the primary. Elkins is unopposed in November.

The questions from the audience were largely the same for all 10.

What do you see as the primary responsibility of a magistrate?

“We have to address the needs of our constituents,” Weistroffer said. “We have to work diligently to resolve those issues.”

“The fiscal court is responsible for all the financial aspects of the county,” Konstantopoulos said. “We set the budget. We approve all spending.”

“To listen,” Blackburn said. “I answer my phone calls. Sometimes I can’t fix the problem.”

Sometimes it is pointing the person to someone who knows the answer, she said.

Thompson said it is representing all of Clark County as well as the district.

“I believe we need to do that to the best of our abilities,” he said.

“It’s foremost representing the people who elect me,” Graham said. “Second is overseeing the money they entrust to us.”

Pasley said it is listening to the constituents and looking out for the county as a whole.

“A magistrate needs to be available to all residents of Clark County, not just your district,” McCord said. Also maintaining services and not raising taxes if it can be helped, she said.

“This is a position of trust,” Davis said. “We need to make sure that money in being spent appropriately.”

Nisbet said the top duties include maintaining the budget and allocating funds to resources.

“I see my role as being responsible to the residents and the employees of the county,” Blanton said. “Each issue they have is their most important issue.”

What can the fiscal court do to spur population growth in Clark County?

“I think a lot of the kids are leaving,” Weistroffer said. “We don’t have jobs that pay well. We’ve got to give them some incentive to stay here.”

“We’ve got to work with industries,” Konstantopoulos said. “We can create an atmosphere that’s conducive to business. We also need residential development.”

“We do seem to be stuck in the middle,” Thompson said. “I look forward to finding a way to reach out and for the fiscal court to support it.”

“One of the problems is we have jobs we can’t fill because people can’t pass a drug test,” Pasley said.

Businesses should be surveyed for skills they need and education programs be established, he said.

“I do thing it’s tied to our drug problem,” Graham said. “We have good paying jobs in Clark County that can’t be filled.”

“Housing might be an issue,” McCord said. “We probably don’t have enough housing. Our businesses are growing.”

“The government is not the economy,” Blanton said. “What we can do is create an atmosphere that’s conducive to innovation and opportunity.”

“When business and the county work together to expand … We’re sitting on a gold mine and we need to learn to dig,” Nisbet said. “We need to overbuild for growth.”

What makes you a better candidate than your opponent?

“Knowing what businesses want and working with budgets,” Konstantopoulos said.

“I think the thing that sets us apart is I can work with anyone,” Weistroffer said. “There’s always a solution to the problem.”

“I think it’s my experience and knowledge,” Blackburn said. “It takes your first term to get your feet wet, to learn the budget.”

“I think I bring fresh ideas and a fresh face,” Thompson said, along with a diverse work background.

“My experience and expertise,” Pasley said. “I know state government. I know the state budget.”

“I don’t like the political class running the government,” Graham said. “I am from the working class side of things. I think I have some fresh ideas.”

McCord said she understands the structure of the fiscal court and committees and brings a strong resolve to be fiscally responsible.

“I have a unique skill set of problem-solving and critical thinking,” Davis said.

“We need action people,” Nisbet said. “(Growth) will come from the courthouse, from the fiscal court.”

Blanton said he would serve with honesty and integrity while taking full responsibility for his actions.