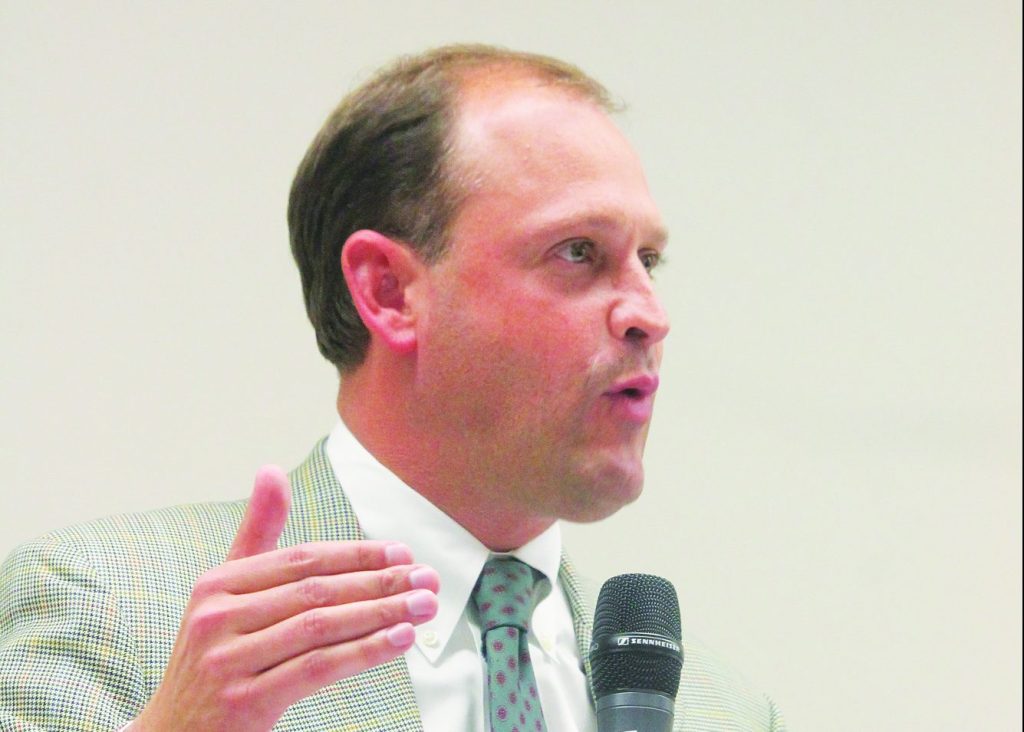 Andy Barr was the only candidate for the U.S. Representative of the Sixth Congressional District present at the candidates forum Tuesday.

Barr’s opponent, Amy McGrath, had previously told The Sun she would send a representative in her place for the forum. However, her campaign contacted The Sun Monday to confirm they would not be sending a representative to participate in Tuesday’s forum, citing a town hall forum hosted by WLEX/Hey Kentucky! which aired the same time as the local forum.

In his opening statement, Barr (R-Lexington) said he regularly shows up for his constituents, citing his regular office hours in Clark County that began when he took office in 2013.

“One of the most important responsibilities of being a representative is to listen and in order to listen to you got to show up,” Barr said. “And that’s the first important thing: we show up.”

Barr fielded questions about helping small businesses, securing the borders, the Second Amendment and more at the forum.

Barr said he has continuously supported small businesses. Barr said Congress has helped to end the war on coal and he has personally endorsed a bipartisan bill to provide regulatory relief to community financial institutions.

“As a result, our capital markets and credit markets have healed, and that’s why you see 4 percent economic growth,” Barr said.

Barr also said he not only supports securing the borders, but he has voted for it multiple times.

“Securing the border to me means more than just one dimension of the issue,” he said. “Why do we need to secure the border?

Because we have cartels. We have this caravan coming at us right now. Not just to stop illegal immigration, but to stop human trafficking, to stop drug cartels and criminals coming in, invading our country and threatening our communities.”

“Admittedly, this is a time in our country’s history that’s very polarized and divided,” he said. “This district is a diverse district, ideologically diverse district. That’s a blessing. That’s not a problem. That makes me a better congressman.”

Barr said he also supported additional middle-class tax cuts, but it will depend on the composition of Congress in the next term.

In regards to the Second Amendment, Barr talked about his endorsement from the National Rifle Association. However, he also discussed school safety, saying it is a personal issue to him as a father of two young daughters. Barr also mentioned a friend of his who had experienced gun violence.

“Despite the narrative, Congress has taken significant action to secure our schools,” Barr said.

Barr said he has also supported and co-sponsored bills that would provide local school districts the flexibility to upgrade their school security.