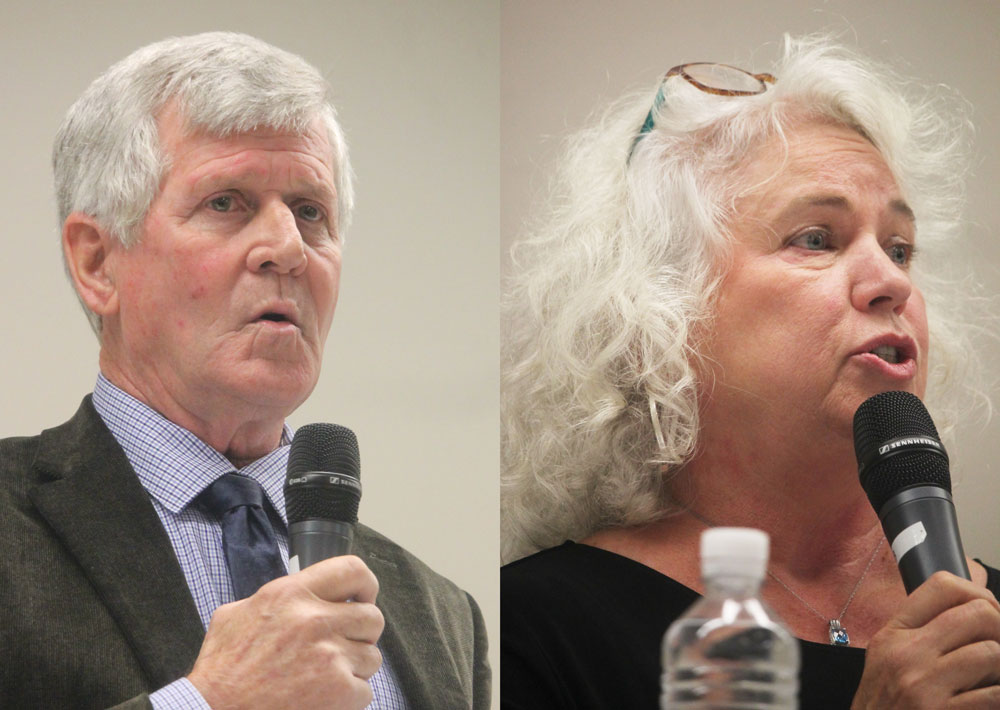 Pat Banks, the Democratic candidate, is up against Republican candidate Les Yates.

The candidates first discussed prevailing wages for the working class.

“Unfortunately, what happens in our society, it would be nice to say make $40 an hour to cook hamburgers, but that’s just not realistic,” Yates said. “I think the living wage is something that needs to be done, but I think we have to add these first-time jobs in order to get young people, to teach them how to work and give them a step up.”

Banks said she supported prevailing wages for the working class.

The candidates also discussed legalizing marijuana in Kentucky. Banks said the idea is intriguing to her because her son had 14 seizures in two years.

“One of the last times he had one, the ambulance driver looked at me and said ‘Can I tell him something?’ I said ‘Sure, go ahead,’ and they said if he could get some marijuana, he may not have the seizures,” Banks said.

Banks said she would also like to see more research on medical marijuana and industrial hemp.

“I think it would be good for our farmers and us,” she said.

Yates said he is also open to supporting medical marijuana as well as industrial hemp.

“I don’t think any of us have a right to tell a person what they can and cannot do on their death bed,” Yates said. “Medical marijuana, things I’ve read, things I’ve researched, there’s a lot of benefits to it. But I do think we need to look at some other things in a little bit more detail, but there is a way to make it work.”

The issue of pensions also came up at the forum.

Yates said he would like to see politicians keep their hands “out of the bucket of money.”

“Somehow, we all, a lot of us, have worked and paid into Social Security all of our lives,” Yates said. “Same with the pensions. That money actually belongs to the people that have earned the money and have paid into it. And I don’t think it should be as accessible as it has been over the last 20 years.”

Banks agreed. She said pensions need to be fully funded.

“The hole is in the top of the bucket because the working people have put that money in there,” Banks said. “When we have a decent, reliable pension system, it will also help us keep our workforce. We want our teachers to be highly qualified, and we want to keep them.”

Banks said the tax system also has to be overhauled and the pensions do not need to be used to fix the budget.

In her closing statement, Banks said she would also like to help attract good-paying jobs, work on environmental issues and aid in the opioid crisis if elected.

Yates said he ran for office because he wanted to give the government back to the people.

“The reason I got into this is I’m tired of seeing taxpayer dollars wasted,” Yates said. “I would like to give the working people a chance, a voice if you will. If elected as a state representative, I feel like my job is not to represent Frankfort to the people, but to represent the people to Frankfort.”