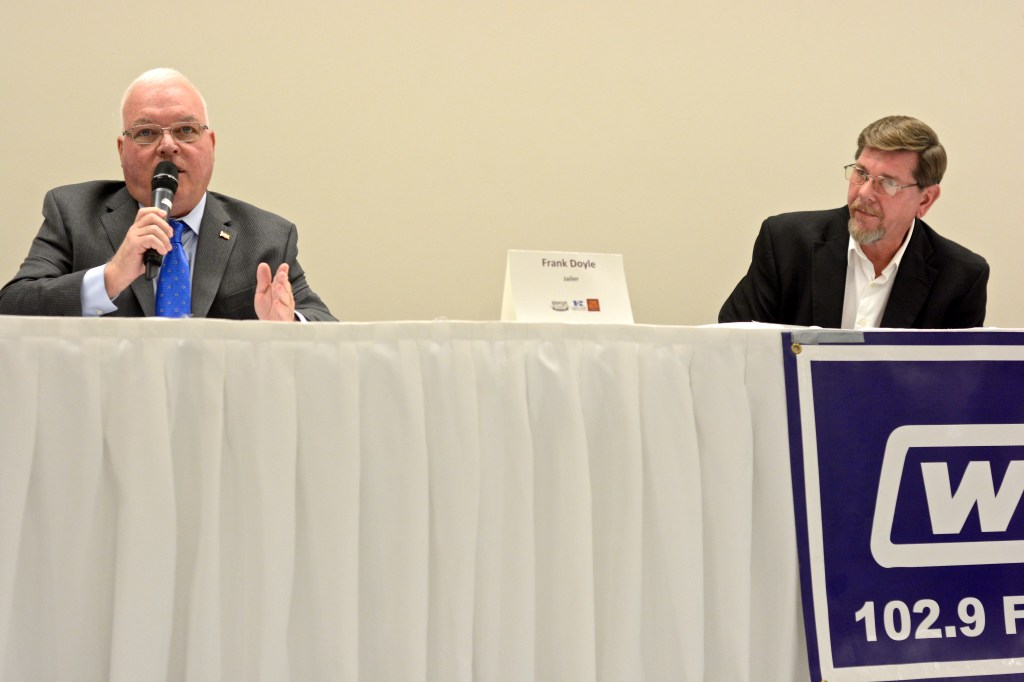 Candidates for Clark County jailer, Frank Doyle, the Democratic incumbent, and Randy Steagall, his Republican opponent, talked about elements of a successful local detention center, ratios of violent offenders, generating funds through the jail and more during the candidates forum Tuesday night.

Doyle, who is completing his first term as jailer, said the most important element for success is the staff.

“If you have a good staff, a well-paid staff, then you don’t have the loss, you don’t have the problems,” he said. “I can’t compliment my staff enough for what they have done in the facility over the last three and a half years. We’ve turned dover $6 million back into the Clark County Fiscal Court.”

Steagall said retention of county funds is most important.

“Keeping that (money) in the jail to help alleviate and take care of the inmates,” he said. ‘It’s just a matter of saving the money so it’s not going to come out of our pockets.”

Steagall said he doesn’t have first-hand knowledge of the ratios of violent offenders, but would support moving them for safety concerns if needed.

“I do feel that if there are a number of violent inmates in that facility, then yes, I agree they should be moved to help keep the deputies and inmates safe,” he said.

Steagall said he also did not know for sure how much of the jail budget is funded by the county, but he would work to alleviate the taxpayers’ burden.

“I think our previous jailer ran on $1.7 million a year and he did a pretty fair job,” Steagall said. “Now we’re up to $3 million and looking at another $1.5 million for 2019. I think that’s a burden for the taxpayer and I think we can do better than that.”

Doyle said Steagall’s figure of $1.5 million additional is misleading because it is based on an employee analysis requested by the fiscal court that accounted for 52 employees. It is not additional money he asked for in the budget, he said.

“Three and a half years ago, you and I, the taxpayers were paying almost 80 percent of the operations of that jail,” he said. “Today, thanks to my staff, we are paying 80 percent of our own way. We’re getting better with it every day.”