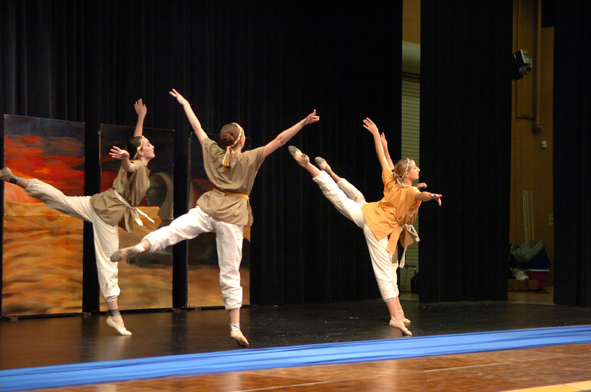 Dancers from Christian Ballet on Main perform a retelling of the biblical story of Moses during a previous East Kentucky Talent and Variety Show. (File photo)

Kirby Roberts, Kiwanis Club program chairman, said the show would begin at 7 p.m. Saturday. Roberts said the show should be over before 10 p.m.

Roberts said there would be a 20- to 25- minute intermission during the show to give the longer acts time to set up. During the break, the audience can grab concessions including popcorn, Ale-8-One, homemade cookies, cupcakes and more.

Boy Scout Troop 75 will present the flags, and vocalist Erica Gaines will perform the national anthem. County Attorney Brian Thomas will be the master of ceremonies at the event.

Tickets are $10 for adults and $5 for children. Tickets will be sold at the door beginning at 5 p.m. and until the start of the show.

“You’ll get your money’s worth,” Roberts said. “There is a lot of talent there.”

Proceeds from the show will be used to fund Kiwanis programs throughout the year, in particular, the annual Walk With a Child program which allows Kiwanians to purchase school clothes, shoes and coats for Clark County students.

Roberts said the cost per each child comes out to about $80, and the more money raised, the more students the club can take shopping.

This year the club was able to purchase clothes for more than 160 students. Local teachers and counselors help determine which children are eligible for the program.

Kiwanis also uses some of the proceeds for its scholarship programs.

In previous years, the event has raised more than $6,000.

Roberts said he encourages the community to come out to the show Saturday.

“They’ll enjoy the show, and it goes toward a great cause,” he said. “It helps the children of Clark County.”

WPD officer puts love for learning into action with…