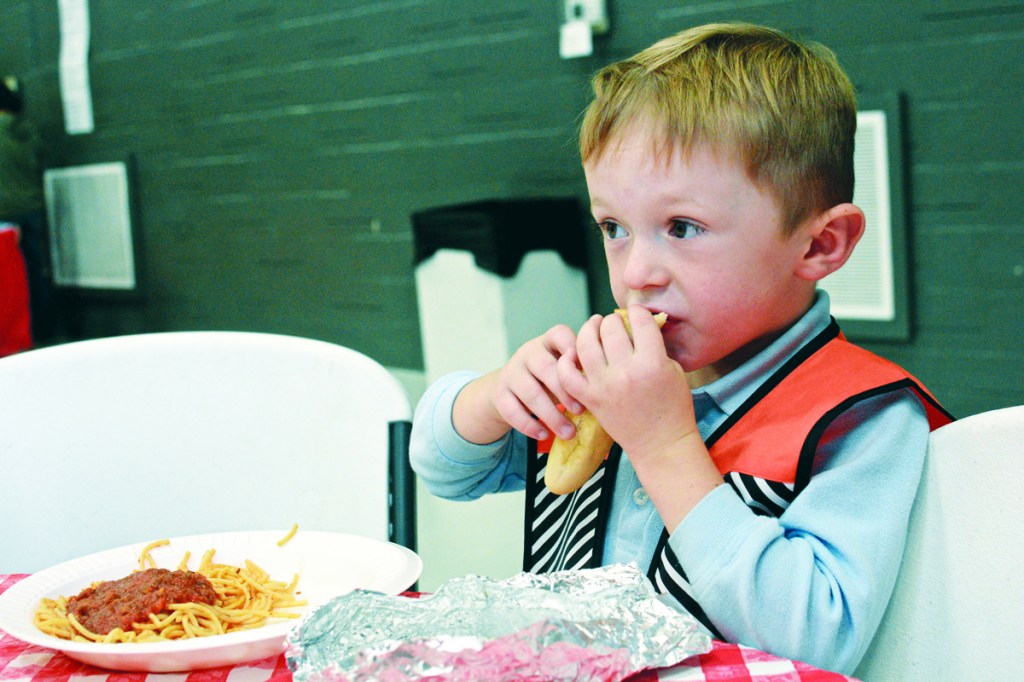 Preschooler Davis Upperman enjoyed his break by eating a breadstick and spaghetti after spending an hour directing customers to the lines as a volunteer at the St. Agatha Academy Spaghetti Supper Thursday. (Photo by Lashana Harney)

Vetter, 11, and a student at St. Agatha Academy had seemed to have sauced nearly a hundred plates of spaghetti by the end of her shift as a volunteer.

Many students and their parents made the 61st annual St. Agatha Academy Spaghetti Supper possible Thursday, serving both lunch and dinner.

Customers dined in, carried out or could even have it delivered. They could choose between meat or marinara sauce and received a salad, cookies, a breadstick and a drink along before sitting down at the red and white checkered tables, decorated with balloons and an arrangement of uncooked noodles reminiscent of Italy, to eat their heaping pile of spaghetti.

The sauce is homemade, and customers could even buy a jar to take home or look through old yearbooks; some purchased SAA T-shirts and other swag.

Five hundred customers had the chance to enter the University of Kentucky basketball ticket raffle for a chance to win two lower arena tickets to see UK face Tennessee State University on Nov. 23 as well as a $150 gift card to be used at Malone’s, Drake’s or Oscar’s restaurants.

Customers could even view student art projects on the wall from their take on Mona Lisa to annotated poems and more.

Elizabeth Morton, a parent volunteer, said the event had raised more than $20,000 in years past. St. Agatha students presold tickets in the weeks leading to the supper.

Fifth-grade students Jayde Cantrell and Lea Kraft said they sold nearly all of their tickets.

Cantrell said the money raised goes directly to the academy.

“It helps to buy new books,” she said.

Kraft said the school could even use the money to help with school supplies or to complete maintenance work such as a broken air conditioner.

Cantrell said she enjoys being a student at St. Agatha Academy. There, she plays trumpet in band class and is currently learning the 50 states, fractions and more. Both Kraft and Cantrell said their favorite subject was history.

Kraft said she is also in the band class, but she plays the clarinet. Kraft said she likes the smaller classrooms at the academy; Cantrell said she loves her teachers.

Kraft’s parents volunteered during the spaghetti supper. Kraft said if anyone missed out this year, there’s always next year.

“The spaghetti is delicious,” she said. “ … It’s a good opportunity to join together, and to make new friends.”

“Come one, come all,” Cantrell said.