Nailed it or Failed it: Rustic plum tarts 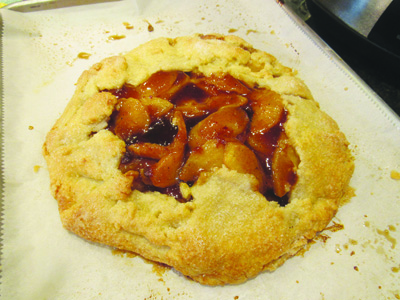 While looking through my file of dessert recipes, I stumbled upon today’s recipe from the July 2008 issue of the Southern Living magazine.

It’s one of those recipes I tore out of the magazine years ago and hoped to make sometime.

When I saw this recipe, I’d written an article which included a trip down memory lane remembering the plum tree that grew in my great Aunt Ruth’s yard.

I, along with my brother and cousins would go to her house on Sunday afternoons and pick plums — or pick up plums off the ground — and take to her sister, my grandmother, to make plum jelly.

I had some plums in the refrigerator I had picked up at the grocery and knew this recipe was meant to come alive in my kitchen.

On Saturday, when supper didn’t take a long time to prepare, I decided dessert was in order. I peeled the plums and tossed them with the sugar, vanilla and ground allspice.

When it came to the plum preserves, I had a jar I’d purchased at the Farmers Market the weekend before.

Granted, it was plum, nectarine and lavender preserves, but I figured it would add to the flavor of this tart. After gently combining the ingredients I sat the bowl aside.

I lined a rimmed baking sheet with a piece of parchment.

Instead of using store-bought pie crust, I made my own.

I like to bake pies and pie crust is simple to make — you should try it sometime if you don’t already.

After making the crust, I rolled it out on waxed paper to a 12-inch circle. Then I wondered why I didn’t just roll it out on the parchment paper.

I transferred the crust to the parchment paper and, since 30 minutes hadn’t passed, I covered the crust with a dishcloth so it wouldn’t dry out.

When the plum mixture had sat the allotted time, I drained the juice into a small pan and piled the mixture into the middle of the prepared crust.

I attempted to fold the pie dough border up over the plums in a fan pattern, but that didn’t work quite so well, but I did the best I could.

Once I had the crust folded up, I beat the egg and water together and brushed it over the crust. I used little of this mixture, and I don’t think you need a large egg.

If you have a different size, use what you have. But my egg wash mixture didn’t go to waste — I cooked it up for our dog Lily, and she loved the treat.

After applying the egg wash, I sprinkled the crust with the sugar and placed the tart in the oven to bake.

As soon as the tart went into the oven, I placed the pan of reserved plum liquid on the stove and let it come to a boil over medium heat.

When it thickened, I turned the stove off and waited for the tart to come out of the oven.

The timer sounded, and I pulled the tart out of the oven and let it cool for 20 minutes. When time was up, I drizzled most of the hot plum liquid over the exposed fruit.

At this point, I asked Brad if he wanted to try a new dessert, and even though he’s not a big sweet eater, he agreed.

I cut both of us a slice and since he likes whipped topping I squirted some Reddi whip on top of his; I ate mine plain.

I didn’t make the Sweet Cream the recipe mentioned because I knew it would just go to waste since Brad wasn’t going to eat much of this dessert.

This dessert was delicious.

Since I knew if this dessert stayed at my house, I’d be eating the whole thing I took some to my brother, Alan, the next day.

When he found out I made it with plums, he started talking about our great Aunt Ruth and asked me if I remembered Sunday afternoons when we were kids and going to her house to pick plums.

I told him, yes, I remembered and had good memories of those days.

After Alan had a chance to taste the tart he agreed with Brad it reminded him of apple pie and asked what spices I’d used in it because he was tasting something different.

I don’t know if the different flavor was the allspice or the lavender in the preserves, either way, he liked it.

My son and daughter-in-law came by Sunday evening, and they tried the dessert too and agreed with Brad and Alan it reminded them of apple pie.

Overall this tart was simple to make, and I wouldn’t hesitate to make it again. It’s a “Nailed It” recipe, and it will be going into my self-made cookbook.

And each time I make it I’m sure I’ll think of my dear Aunt Ruth.

Fold pie crust border up and over plums, pleating as you go, leaving an opening about 5 inches wide in the center. Stir together egg and 1 tablespoon water.

Brush pie crust with egg mixture, and sprinkle with 1 tablespoon sugar. Bake at 350 degrees for 45 minutes or until filling is bubbly and crust is golden.

Carefully transfer tart on parchment paper to a wire rack; cook 20 minutes. Meanwhile, bring the reserved plum liquid to a boil in a small saucepan over medium heat.

Boil 1 to 2 minutes or until slightly thickened. Let cool slightly. Brush or drizzle 1 to 2 tablespoons hot plum liquid over exposed fruit in center of tart.