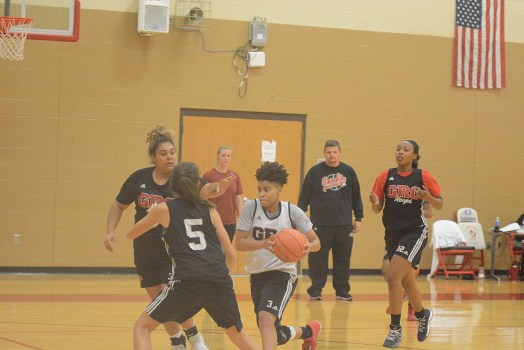 Aliyah Gray eurosteps through the lane and finishes at the basket. (Photo by Micah Satterly) 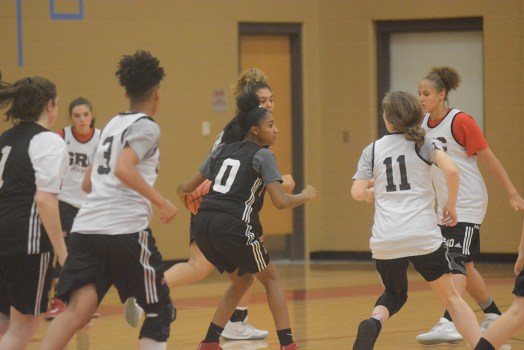 Trinity Gay looks for a teammate to pass to. (Photo by Micah Satterly) 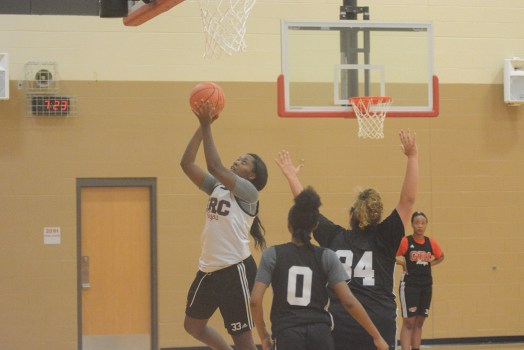 Maleaha Bell goes up for a layup at practice Tuesday. GRC will tip off the season Nov. 28 as the Cards host Sacred Heart. (Photo by Micah Satterly)

The George Rogers Clark Lady Cards have been in the gym preparing all month to take the next step.

GRC is coming into the 2018-19 season as the defending 10th Region champions for two straight years.

In the 2016-17 season, the Lady Cards made it to Elite 8 of the state tournament and made it to the Final Four last season.

Both year’s losses in the state tournament has been from the two-time defending champions of Mercer County.

Seven-year coach Robbie Graham has taken three teams to the state tournament, but he said this team is special because of their love for the game.

“They always play hard,” he said. “They compete and play hard. They want to win and be successful. We put in a lot of time and they put in a lot of effort throughout our practices. They reward themselves with the hard work. This year, we are hoping to take that next step. We adopted the motto to ‘win the last one.’ We have knocked on the door the last two years so this team we are hoping to kick it in. Mercer has been a great team the last two years and we lost to the state champ. We are hungry and are looking to take that next step.”

The dedication to the game is the formula that Graham believes will help them take the next step.

Graham said he has been putting extra effort in working on his team’s defense this season.

“We are primarily a man-to-man defensive team,” he said. “We grind on defense quite a bit. We are going to change up the offense a little as we are going to try and play a bit faster. We want to try and open up a little more and give the girls more freedom to make plays. We will take advantage of our athleticism and basketball ability.”

Graham said his team is like his second family.

“They mean a lot to me,” he said. “My kids that are with my wife are my kids and I love them dearly, but with these girls, you spend so much time with them and get so close to them they are like your kids. Almost like your extended family. I tell them I will coach them hard but love them harder.”

Graham said the game of basketball is what inspired him to be a coach.

“I have always loved basketball,” he said. “I have always played and I have the opportunity to give back. The game gave me so many opportunities and I met so many people throughout the years. I have had some great teachers throughout my years and hopefully some of them will be able to say I was that to them, too. I try to stay close to my former players whether that be text or phone call. I try to stay close to them.”