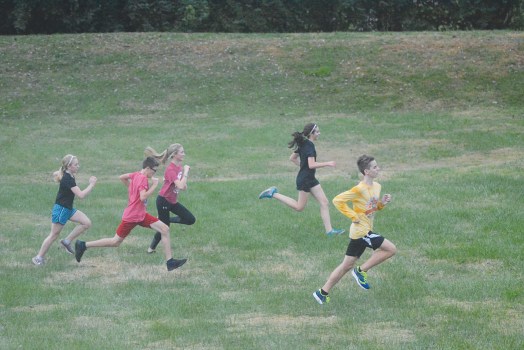 GRC’s cross country team will be competiting in the 5k at state in Lexington this weekend. The girls team placed second and the boys team placed fifth in regionals last weekend in Danville. (Photo by Micah Satterly) 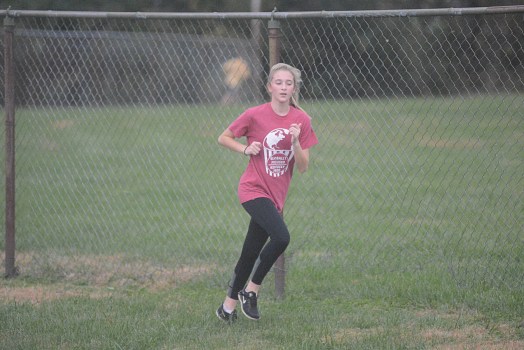 Ellie Mitmesser runs around Christview Christian Church Thursday in preparation for the state 5k this weekend. (Photo by Micah Satterly)

The GRC cross country team has been in the cool, rainy fall weather preparing to participate in the state 5k at Horse Park in Lexington this weekend.

Head coach Dodd Dixon said he was very proud of the team, especially through the circumstances they have faced this season.

“It has been a rollercoaster season,” he said. “We started the season ranked at the top of the region on the girls’ side and quickly dropped to the bottom and clawed our way back up to second. Rankings are just rankings, though. Some challenges we faced this year was every race we ran was on a hard and slow course, which works on your head a little bit. They were also all in the afternoon and the heat index was horrible. All the training was during hot weather so it was like running into a brick wall all season.”

Sophomore Maria Jackson said the team’s struggles at the beginning helped put them in the position they are now.

“We have seemed to pull it together by getting second in region,” she said. “It was a big accomplishment for us and we were really excited. We have definitely faced some struggles this season, but we have overcame them very well.”

Despite the controversy, Dixon said his team has responded well and have came together even closer than before.

“Our team is very strong for that,” he said. “We are a whole lot better because of that adversity. Our success is that much sweeter because of it. Around the first of October we were all about ready to break down because it has been a tough season with a lot of challenges.”

Dixon said his team has proved their mental toughness this season because of the obstacles they have faced and overcame.

“You either got it or you don’t,” he said. “Everybody had to look in the mirror at one point and decide whether they want to walk away or persevere. After that gut-check moment, we ended up persevering. I had girls crying saying they were not sure if they could do it, but it all worked out. It has been one of the best years and I have loved it. It was really tough at the beginning of last month. I had never had a season this hot and it was challenging for everyone. The last practices messed up everyone’s normal schedule, but we came out a better team.”

Dixon said his team changed up their normal training in order to prepare for state.

“Last year, we peaked two weeks before region,” he said. “We were just on fire. Our performance started to slip two weeks after that. We tried to change it around this year so we would be better in the postseason, which was another mental challenge. Our goal is that this will be the best year ever for our state meet performance. We are optimistic and the kids have been improving significantly by seconds at a time.”

Dixon said he is not trying to put pressure on his runners to do well at state, but he is motivating them to become the best runners ever in GRC’s program.

“We have to take our goals in digestible bits,” he said. “Right now, we are just wanting to be the best GRC team ever in state. Last year, our girls were 20th but they could have been better and it was a mental and peaking thing. I do not think we are peaking too soon this year.”

Jackson said the team will have to leave nothing behind and it will take everyone’s best efforts to be successful at state.

“It is going to take all of us doing our very best,” she said. “We are all going to have to leave it all on the course. We are going to have to want it more than all the other teams and put up a fight.”