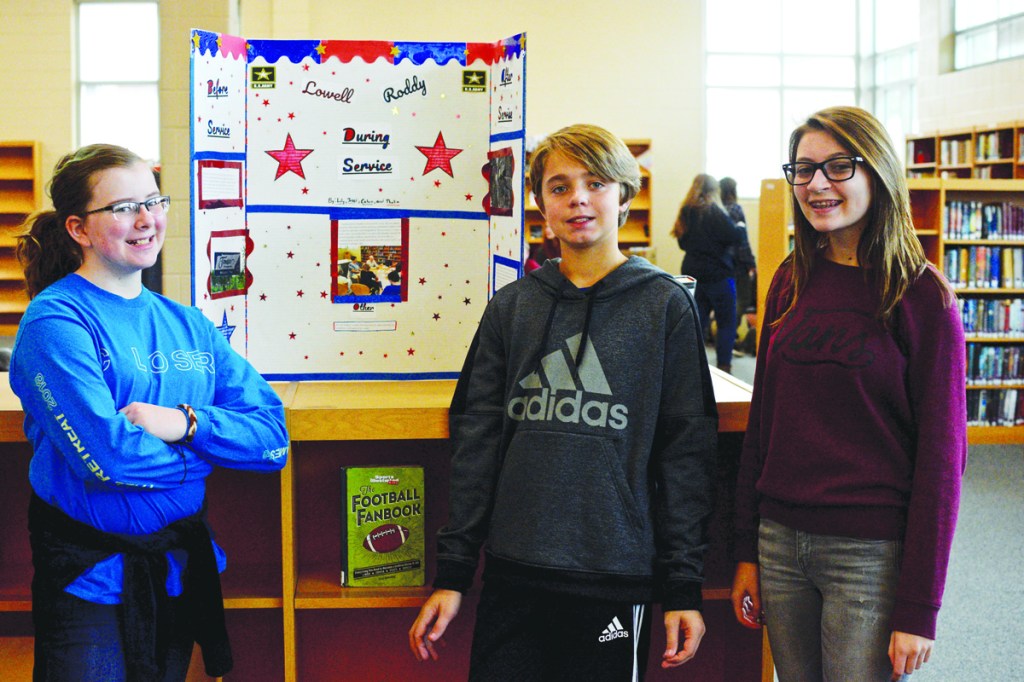 Seventh-graders Thalia Roddy, Calvin Roach, Jessi Young and Lily Ballard (not pictured) worked on a poster to honor veteran Lowell Roddy. The poster will be displayed during Robert D. Campbell Junior High's Veteran's Day program on Nov. 12. The poster was part of a larger project for seventh-graders called the Amazing Shake. (Photo by Lashana Harney)

Students at Robert D. Campbell Junior High School are learning about soft skills and what it means to give back to the community.

Leah Adams, a seventh-grade social studies teacher at RDC, said about 130 students are involved in a new program, the Amazing Shake. Adams and a few other teachers discovered the program in August at a training conference in Mason County.

“The idea is that the program is built around supporting practice of soft skills,” Adams said. “And we’ve always said that is something that I believe that our students should be doing.”

As part of the program, students are completing a community service project where they are collecting hygiene products for veterans in the Veterans Administration hospital in Lexington.

Adams said the main take-away for this year was to get students involved in the community. RDC hosts a student-led Veterans Day program each year. Adams said she and the other teachers thought the best way to introduce the idea of civic leadership and community involvement would be to create a lesson that would work toward a product for the Veteran’s Day program.

“We took the ideas of that program and tried to design something that would help to support our Veterans Day program,” Adams said.

So far, students joined groups to contact a local business and create a display for those businesses to gather donations of toiletries which will be distributed by the local VA to retirement homes, the homeless shelter and the VA hospital in Lexington.

“The students designed a donation drive, designed their own displays, contacted the local businesses and went out into the community to set up these donation boxes,” Adams said.

A few weeks ago, RDC hosted nearly 30 veterans who came in throughout the day to be interviewed by small groups of students. Now, students are working to transcribe those interviews which RDC will submit to the Veterans Oral History Project at the Library of Congress. This week, students illustrated the veteran’s information from their interviews onto tri-fold boards which RDC will display at the Veteran’s Day program.

Seventh-grader Jessi Young said her group interviewed Lowell Roddy, an Army veteran. She said it was interesting to get to listen to his stories, and she is glad she gets to help give back to other veterans.

“I like to see people smile from just little things that we could do,” Young said.

Seventh-grader Thalia Roddy, who also happens to be Lowell Roddy’s granddaughter, said she learned even more about her grandfather that she had not known before. She said she is proud of her group’s project.

Roddy said she also enjoyed putting the project together.

“I think it’s a great way to make the veterans feel appreciated,” she said.

Adams said she hopes students can gain a better understanding of what it means to be selfless and putting others before yourself by learning the importance of the decision to serve the country.

Building toward those interviews, students participated in mini-lessons to learn how to speak over the phone, what it means to be an active listener, how body language reveals interest and of course, a proper handshake.

“We had an entire lesson where we talked about just the way that you hold yourself and you present yourself, how that speaks volumes on how you’re perceived,” Adams said. “So we did a lesson on what it means to appear interested in the conversation and make sure that you’re coming off as being respectful, and how even the smallest changes in your body language can read as disrespect.”

Young said she is glad she is learning these skills now.

“Whenever you get older, and you’re going in for a job interview, for example, you might not be prepared,” Young said. “That sets you up for failure from the start.”

Adams said she is impressed with the growth the students have made even in small areas such as giving a proper handshake.

“That’s where the name of the program comes from, the Amazing Shake, the fact that something as small as a handshake can have an impact on someone’s first impression,” Adams said.

Young said the program had helped break from her shell.

“At first, it was kind of like nerve-wracking, but it’s gotten a lot easier,” Young said. “I’m usually super shy. And I feel like I’ve come out of my shell a lot, just from little things like that … This is making a big difference in my life, as well as others’.”

After the Veterans Day program, Adams said students would continue mini-lessons on a variety of soft skills and allow for opportunities to practice those skills. Then when students come back from Christmas break, students are going to focus on the individualized community service projects.

“Each individual student is going to be completing, researching and putting out their own community service project based on something that they are interested or passionate about,” Adams said.

In the future, Adams said she aspires to log as many hours as Mason County had.

“Last year, every student in their building had logged community service hours, and they had over 6,000 hours of community service in a year by students,” Adams said. “That’s our goal. That is where we would like be. What better way to connect these students to the community that they live in, by giving them an opportunity and building that opportunity for them to make that connection and go out and do good for others and be selfless.”

Adams said she is proud of her students for taking the project seriously.

“They understand the importance of this process. They are working toward something. And I think that that’s one of the reasons that they’ve grabbed on to this idea is that they see the importance in it. This isn’t just some other thing that I have to do for school. They see the bigger picture.”