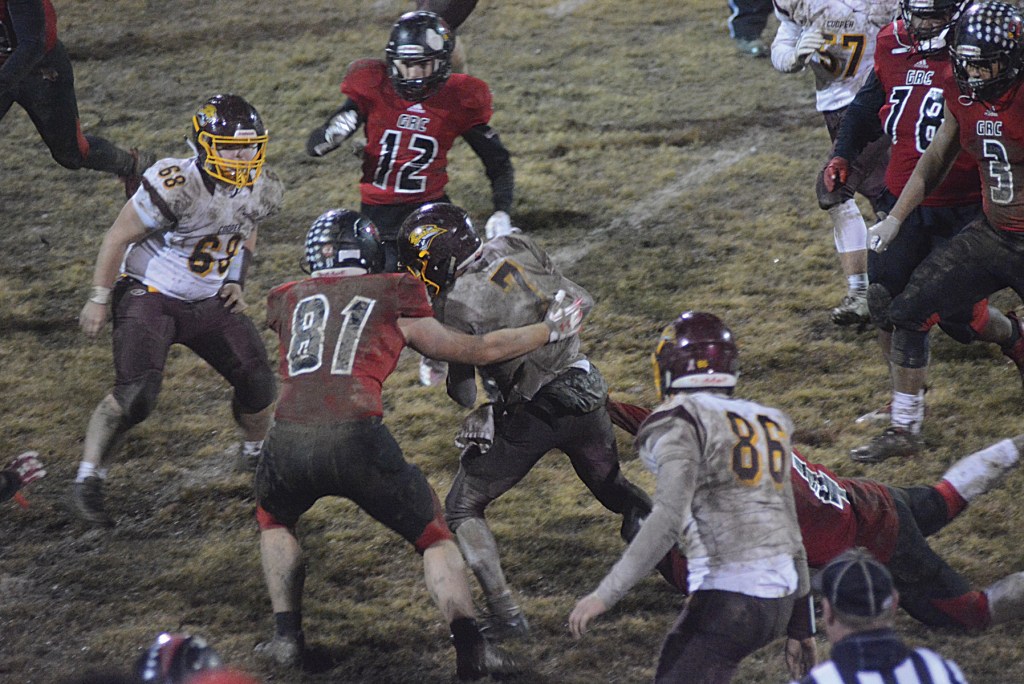 Landon Langfels (81) makes a tackle in the second half of GRC’s 48-21 loss in the first round of the playoffs to the Cooper High School Jaguars. (Photo by Micah Satterly)

The Jags came out hot as they forced a three-and-out for the Cardinals on their first possession and only allowed two yards.

On Cooper’s first possession, a 43-yard rush set them up three yards outside of the end zone in good field position.

The Jags quickly put numbers on the board as they took the lead 7-0 less than three minutes into the game.

Azariah Israel broke out for a 31-yard rush that nearly put the Cards in the red zone on their next possession.

GRC could not convert on fourth down and turned the ball over to Cooper.

GRC stopped Cooper from getting anything going on the next drive.

The Cards received the ball back and threw an interception which was returned 28 yards for another touchdown to stun the Cards.

Cooper led 14-0 with four minutes to go in the first quarter.

GRC finally found an answer as Israel rushed to end zone from 14 yards to put the Cards on the scoreboard.

The extra point was no good and the Jags led 14-6 at halftime.

Everything was going the Jaguars’ way as they opened up the second half as a 40-yard touchdown pass extended the lead 21-6.

The pass bounced off Tye Boyken at the 20-hard line and the receiver somehow managed to catch it to coast the rest of the way for an easy score.

GRC quickly had an answer as Israel ran 33-yards to help put the Cards back in the red zone.

Another rushing touchdown from Israel from 15 yards out brought the game back to one possession as GRC trailed 21-13 with nine minutes left in the third quarter.

Cooper managed to pull off another 40-yard touchdown pass on their next possession to bring the score 28-13 with eight minutes to go in the third.

Cooper once again regained momentum on GRC’s next drive as they picked off their second pass of the night to regain possession of the ball just outside their red zone.

A four-yard rush brought Cooper’s lead 35-14 with five minutes left in the third.

The Cards could not find a rhythm as GRC fumbled on the kick off return to give the ball back to the Jags on the 34 yard line.

Israel added to his rushing numbers after a 77-yard run brought the Cards to the 7 yard line.

A 2-yard rush from Israel cut into the deficit.

The two-point conversion was good to bring the score to 42-21 in the fourth with eight minutes to play.

A 27-yard reception set Cooper up at the two yard line as the receiver caught the pass despite two Cardinal defenders smothering him.

“They maximized their abilities,” he said. “Their players maximized the opportunities that were presented to them. If have great players making great plays then that is what happens. We knew no. 7 Jeremiah Lee was the dragon and we could not cut his head off. All the other kids stepped up their game and did what they did. They did not try to trick or us or do anything different. They beat us at what we do. We did not execute and we gave up points. We did not play well as a unit and because of that, that was the result.”

Lucas said his team did not come close to matching Cooper’s energy from the opening kick off until the end of the game.

Lucas said there was a bright spot to the season with their winning record which means the program can only go up from here.

“You can build upon winning,” he said. “You cannot build upon losing and i do not care what anybody says. Losing is losing. Winning always helps anyone. Hopefully we can build on this and keep going. Our football IQ is not there and we are not there like we should be.”

Lucas said he will continue to put his best efforts into helping change the program for the better.

“Like I said, I am too stupid to quit and too dumb to give up,” he said. “I have to keep on working hard and prepare next year. That is it. Next year is a long way away, but that is what I have to do.”