Nailed It or Failed It: Saucy chicken casserole 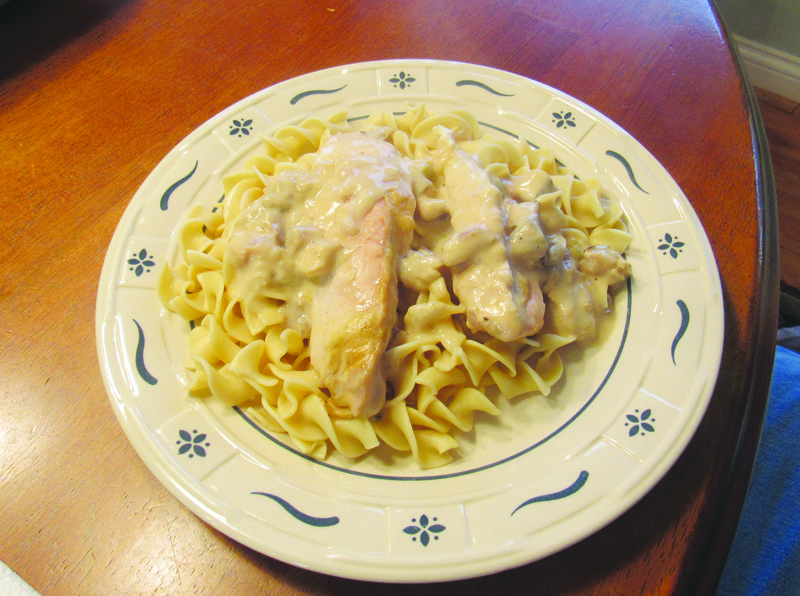 With the chilly weather, I’m in the mood for comfort food. I want something in my tummy at suppertime that will warm me through and through.

As usual, chicken was on the menu for supper. I wanted something different: something fairly simple that would warm me to my toes. I pulled out the folder of chicken recipes I’ve saved over the years and started thumbing through them. I found several recipes for chicken entrees that appeared to have been published in Taste of Home.

I ended up choosing the Saucy Chicken Casserole recipe because it called for mushrooms. Brad grows shiitake mushrooms and he’d just picked several so I knew he’d appreciate something made with them. Another reason was it called for mixing everything right in the baking pan, which meant less dirty dishes to wash. I’m all for that on a weeknight.

After arriving home from work, I cleaned the chicken (I only thawed three large chicken breasts, which were close to six normal size ones). I put the cleaned chicken aside after slicing each breast in half – we like our chicken cut into strips instead of having a huge piece of chicken.

I’m not crazy about mushrooms. No, I don’t like mushrooms. Needless to say, I don’t buy cream of mushroom soup. Instead I substituted a can of cream of celery soup. I dumped both cans in to a 9×13 pan then added the sour cream and chicken broth. We don’t drink and I certainly wasn’t going to buy a bottle of wine to use in this recipe so of course I used the chicken broth instead.

I chopped the onion and added it, along with all of the seasonings, to the soup mixture. I gently stirred all of the ingredients together and then sprinkled the mushrooms over half of the mixture, making sure they didn’t end up in the part of the mixture I’d eat, and then laid the chicken on top.

I popped the pan in to a preheated oven and set the timer for 45 minutes. I figured since I’d cut the chicken breasts into smaller pieces, the dish might be ready a little earlier than the recipe stated.

While the casserole was baking, I rinsed and cut some fresh broccoli to steam. I also filled a pan with water and the leftover chicken broth so I would be ready to prepare egg noodles when the chicken was almost done. I chose noodles over rice just because we both like egg noodles.

When the timer sounded at 45 minutes, the chicken didn’t look quite done so I let it continue baking while the egg noodles were cooking and the broccoli was steaming.

After setting the table, putting the meal on the table and Brad’s prayer, we got to work filling our plates.

Brad and I agreed this dish was pretty good. Because I’m a salt lover, I think it could have used a little bit more than the recipe said. I just sprinkled some on as I ate. We thought I probably cooked it a little too long because a few of the chicken pieces seemed a little bit dry.

I think it would have been better if the chicken had been covered with the soup mixture while it baked. Since we’ll be having it again sometime this fall, I made a note to mix it in with everything else.

There was certainly enough of this casserole for Brad to have lunch the next day and for us to have a second meal. Before putting it in the refrigerator that evening, I stirred the chicken into the soup mixture. The second time around the chicken was much more tender.

I nailed this recipe and it’s in my self-made cookbook for the long winter nights headed our way.

Bake, uncovered at 350 degrees for 1 hour or until chicken juices run clear. Serve over noodles or rice. Garnish with minced parsley.