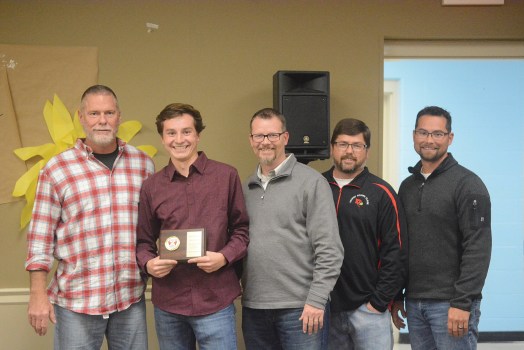 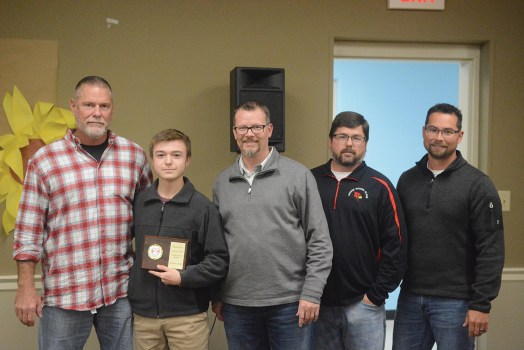 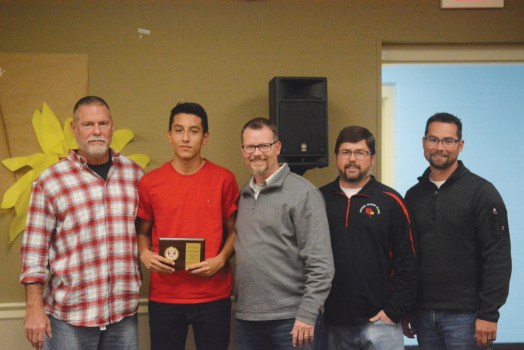 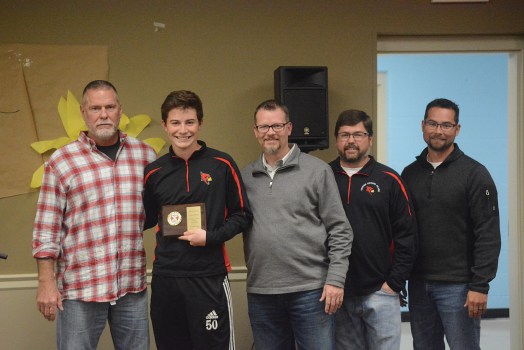 Tayman Hayes receives the Newcomer of the Year award. (Photo by Micah Satterly) 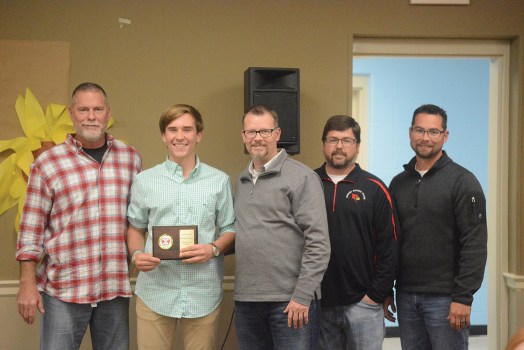 GRC soccer hosted their postseason banquet last Friday to recognize the season accomplishments and look ahead to next season.

The Cardinals went through a rebuilding year after losing 15 players and only had one returner who had experience at the varsity level.

GRC finished 5-14 as the 39th District runners up.

Through the adversity the team faced this season, the coaching staff wanted to have an award ceremony to reward the players who had an impact on the team.

Trystan Hayes said the reward he received means more to him than words can explain.

“It means a lot to me to be recognized because I have only been playing defense for three years,” he said. “This year was the really the first year we focused on it a lot in practice so I worked a lot on other skills outside of practice, too.”

Curtis said it caught him by surprise to win the coach’s award.

“It means a lot to me that the coaches think of me as a leader,” he said. “They believe that my attitude brings a positive effect to the team.”

Pierre said winning offensive player of the year is a great achievement for him.

“It was nice to win the award,” he said. “It meant more to me knowing my teammates chose me rather anyone else.”

“The terms ‘rebuilding season’ has been thrown around a lot this year because we had a freshmen and sophomore heavy team. After going into first round of districts, we obviously were not favored much. In the end, we are region qualifiers and the men’s soccer team has not seen that in a while. I am pleased with how my senior season went.”

Curtis admits the difficulties the team faced this year.

“This was definitely a tough season due to all the experience that graduated,” he said. “I feel like we grew more as a team going forward.”

Piedra said he is motivated to see more success.

“I have only been playing for a short time,” he said. “It has been about four years now, but this year I finally worked my way up to varsity. Being somewhat successful really pushes me to work even harder to see what happens my senior year.”

Trystan Hayes said he would not change the time he had at GRC for anything.

“I have had nothing but great experiences with this team,” he said. “Even Saturday morning practices or practices in the rain can be made fun. This team is a fun group of guys, most of which I probably would not have met if I did not play.”

Curtis was given the coach’s award because he overcame a tough challenge during the season.

“I started the first 10 games when the season began,” he said. “I got to a point where I thought I was not contributing to the team like I should be and lost confidence in my play. I asked coach Ridener if I could drop down to JV to work on it. After a couple weeks, he put me back as a varsity starter and I think I played some of the best soccer I have ever played in my career. I ended up breaking my collarbone during the Paris game. This award made me realize it is ok to take a step backward as long as you are doing it to help you move forward.”

Trystan Hayes is attending Georgetown College next year and he plans to take his defensive skill to the college level.

“As I transition into college soccer, the most important thing I can do is keep an open mind,” he said. “I will be playing under a new coach with new tactics, new players and it will be very different for me. It is important that I work hard and get to know the team to make college experience enjoyable.”

Curtis said he wants to use the experience he gained this year to become a leader for the younger players next year.

“My goals are just to keep setting a good example for the younger players to follow,” he said. “Hopefully as a team we can come together to compete for some district and regional titles.”

Piedra said he hopes to continue being a key contributor to the team next year.

“I want to help us become a better team,” he said. “The individuals are important, but the team is how we will win districts or even regionals. We have to get that winning season next year that we missed out on this year.”