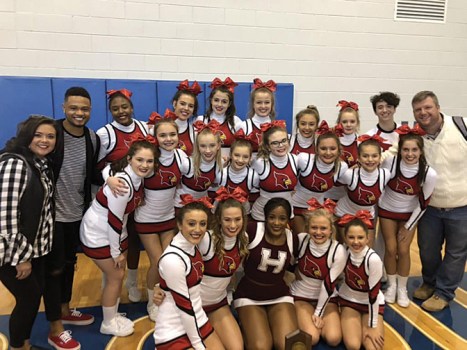 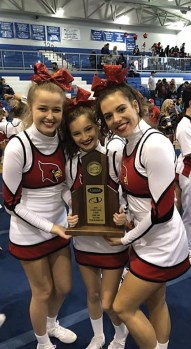 The Cardinals performed band dance, sideline, timeout cheer and the traditional fight song for the sections.

Head coach Chris Tipton was proud of the result.

“I am extremely proud,” he said. “With it being a new division, it was kind of like not knowing what is going to happen or who you are going to compete against. I was very pleased with the outcome.”

During the summer, the cheer team was given the Leadership Award from WKU.

Tipton said the support the team has and their dedication has led them to these awards.

“We have got a good of coaches,” he said. “This is our first time coaching together. We all have different aspects of what we need to do and what our view on the team is. Our girls work really hard, and we have had ups and downs, but their work ethic has been phenomenal ever since they started to get going.”

Although the team’s accolades are well-known, Tipton said what the team has done behind closed doors is what has lead them to their success.

“Working up to sections, we practiced three days a week and practices run from anywhere between two to four hours. Coming into it and getting ready for sections we had a four and a half hr practice. For eight weeks, we did conditioning training to get our stamina up where it needed to be.”

Tipton said his team has a certain mindset as motivation to get through each season.

“We have goals set,” he said. “We look past what we need to do for our own team. We do it for school spirit. Plus they they really enjoyed football season because we had a much better season than we have in the past. They are also looking forward to basketball. We try to make it more of school spirit rather than a competition all the time. They like the fact that people like them and they perform well in front of a crowd. That hypes them up and gets them ready to perform.”

GRC will be headed to state Dec. 8 at the Kentucky Horse Park.