Kerr and Combs headed to Nationals next summer 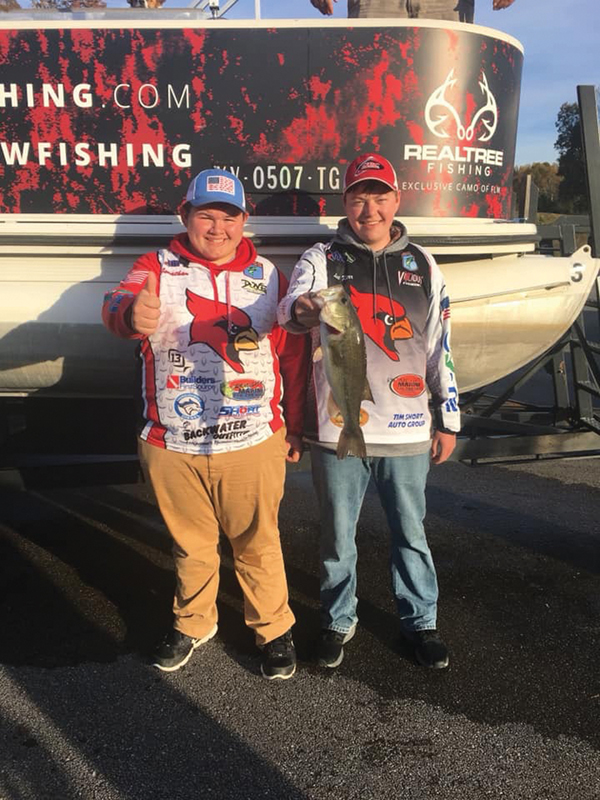 Jonathan Combs, left, and Colby Kerr pose for a picture during the FLW High School Open at Dale Hollow lake last weekend. Kerr and Combs will compete in the National Championship and World Finals this summer in Pickwick, Ala. (Photo submitted)

The George Rogers Clark bass fishing team participated in a FLW High School Open at Dale Hallow Lake this past weekend to fish for a spot in the 2019 FLW National Championship and World Finals. There 168 teams competing to place in one of the 17 spots.

Colby Kerr and Jonathan Combs finished 12th and earned a spot to fish in the 2019 National Championship and World Finals in Pickwick, Ala. this summer.

Coach Billy Damron said his team has put in countless amount of hours to prepare for this stage.

“They are very determined,” he said. “They put in a lot of work. They do research on and off the water. Most kids run around on Friday nights with friends, but these kids are at home going to bed because we have to hit the road at 3 a.m.

Combs said he has worked hard for the spotlight.

“It has taken countless hours, not only for us, but for our boat captains even more so on the water to practice, learn the lakes and ways to catch the fish.”

Kerr said he has been waiting his whole fishing career for this moment.

“This is an opportunity that we have been striving for our whole career,” he said. “Representing our school, state, county and sponsors is a true honor as well as a dream come true.

Damron said his team will continue to prepare although the tournament is half a year away.

“We are still fishing,” he said. “We meet every two weeks and go over new baits, techniques and try to  study maps for whats coming in the near future.”

Combs said he will continue to stay on the water as he awaits.

“I hope I can spend all this time on the lake,” he said. “I have to learn about the lake, different ways to catch the fish and I want to have fun while doing so.”

Kerr said he will continue to work hard because that is what has gotten them so far.

“We have spent hundreds of days on different lakes around the southeastern part of the United States,” he said. “We have fished in both extreme heat and freezing cold all because we are chasing the dream of one day fishing on the national championship level.”

Combs said he enjoys fishing because it is all he has ever known.

“It has been all I wanted to do ever since I fished in my first tournament,” he said. “I just really enjoy the competition and there is always something else to learn about each lake.”

Kerr said he loves fishing because of his close relationship with his family.

“I have loved fishing ever since I started going with my grandfather,” he said. “I played the traditional sports growing up, but I found my passion in competitive bass fishing. Between the competition of the sport and my passion to succeed, I have found an outlet to showcase my abilities.”