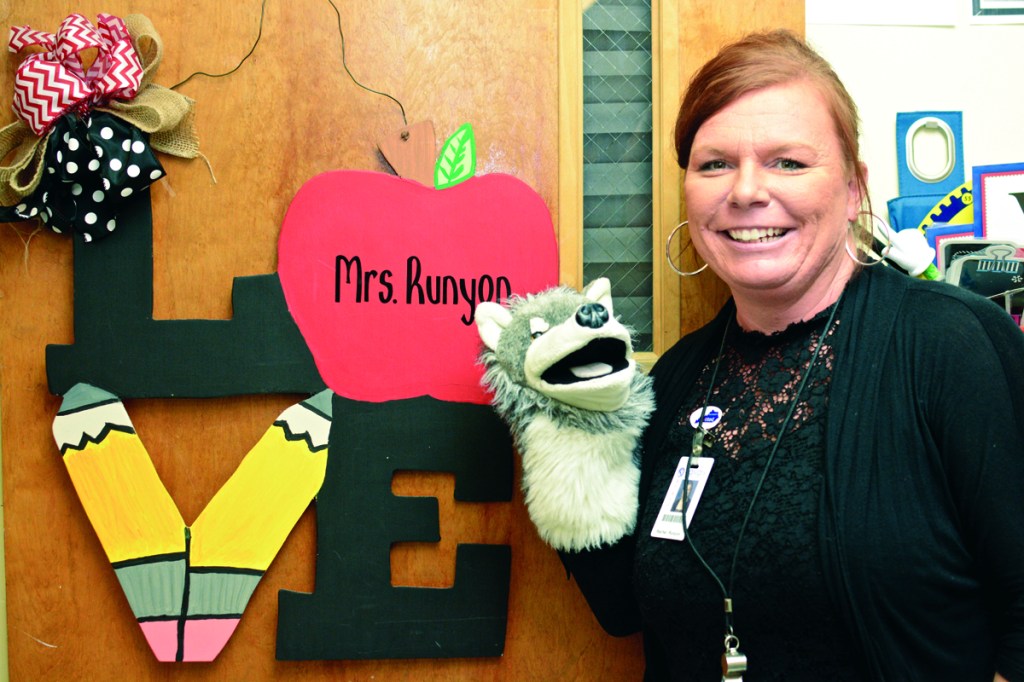 Rachel Runyon, a kindergarten teacher at Calvary Christian School, uses the new Wolfie along with other "shenanigans" to make learning fun. This year marks her eighth year teaching.

A few weeks ago, Rachel Runyon was teaching her kindergarten students about Samuel the prophet.

She explained what it meant to be called by God to do something as Samuel was called to be a prophet.

Teaching is not Runyon’s chosen profession. It’s her calling, she said.

Runyon, a Fleming County native, is in her eighth year teaching at Calvary Christian School.

Runyon has 15 years of experience working with children in early childhood as a Sunday school teacher.

“It just got to a point where being with kids for one hour, once a week on Sunday wasn’t enough,” Runyon said. “And I applied to teach preschool here at Calvary.”

She holds a bachelor’s in business administration from Indiana State University.

“I didn’t know exactly what I wanted to do,” Runyon said. “But I thought that was general enough to cover anything I wanted to do.”

Runyon and her husband, Brian, live in Winchester and have two children. When Runyon isn’t teaching, she often helps her husband with his lawn care business.

Runyon said neither she nor her husband had any ties to Winchester, yet they settled here years ago anyway.

When Runyon’s children were young, she stayed home with them.

“We transformed our dining room into a little preschool classroom,” Runyon said. “And people would come in, and they would say, you should have been a teacher when I was in my early 20s. And I thought, you know, my life’s not over yet. It’s not too late. And so that was one of the things that prompted me to apply here.”

Runyon’s son is in the sixth grade at Calvary. Runyon’s family lives out in the country. Together they love being outside, hiking, building campfires and more. On Sundays, they worship at Calvary.

As a kindergarten teacher, Runyon said she combines fun and creativity with her strong desire to impact the lives of children spiritually, academically, socially and emotionally.

Runyon said she believes children are precious gifts from God, and she desires to provide a safe and nurturing environment for their education.

“(Children) are so innocent, and their love is so pure,” Runyon said. “They truly love you, because you’re their teacher. And there’s no greater feeling than that in the world.”

Runyon said when her husband came to visit last week for lunch, the children flocked to him and showered him with hugs.

“When I got home that night, he just said that filled his heart,” Runyon said. “It was incredible. He said it’s really like when Jesus says let the little children come to me.”

Runyon said she is passionate about helping children become who God created them to be.

“God is interwoven into everything I do,”  Runyon said.

One of the most challenging parts about being a teacher is being “on stage” all day.

“It’s just like being on stage giving 19 individual performances all at the same time,” Runyon said. “But I thrive in that way.”

Runyon said her class is always having fun, whether it be learning Bible verses in alien voices, singing or using either old Wolfie or new Wolfie to teach a lesson.

Runyon said she would even describe her teaching style as “shenanigans.” She hopes to incorporate more science experiments into the classroom.

One student wondered what would happen to the apple seeds she picked out of the apple from snack time if she placed it in a bag of water. So, Runyon said let’s find out. A bag filled with water and a few apple seeds now hangs from the window of Runyon’s classroom.

Above all, Runyon said she hopes her students remember how much she loved Jesus.

“I look back at my kindergarten teacher, and you just have snippets of your childhood you remember,” Runyon said. “And I remember her being stern. And I remember naptime for some reason. And that’s it. I don’t remember who she was. I want to be remembered. I remember her name, but I want [my students] to remember Mrs. Runyon and how she loved Jesus.

“As they grow, when they look back, and they remember me, I want them to remember that I tried to lead them to the Lord as much as possible.”

Runyon said she plans to stay on this path.

“I pray a lot about where am I supposed to be at,” Runyons said. “But then I sit there, and I teach that lesson about how God called Samuel to be a prophet. Well, I know God called me to be a teacher. So unless he tells me directly, otherwise, yes.

Show all about the hair