Museum given deed to nearby home, lots 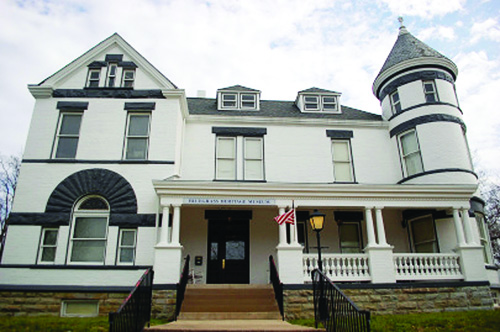 The Bluegrass Heritage Museum will likely expand thanks to a generous donation of a nearby home and lots.

The museum’s board announced this week that the Edward O. Guerrant Memorial Association deeded the remaining real estate, located on South Main Street and Valentine Court, to the nonprofit museum.

“This property consists of the house immediately behind the Museum located at 21 Valentine Court and the two lots on either side, which includes the present parking lot, and includes the historic carriage house,” according to a press release from the museum.

Built in the 1930s, the house served as the nurses’ quarters for the Guerrant Mission Clinic and Hospital. In recent years, the house was the residence of the late Wallace Guerrant, his wife Lana, and their family.  They also operated a bed and breakfast out of the building for a time.

“This donation continues a legacy of service to the community by the Guerrant family,” according to the release.”

In 1927,  E. P. Guerrant, grandfather of Wallace Guerrant, established the hospital in the building currently housing the museum at 217 S. Main St.

The hospital closed in 1970, but the downstairs remained open as a clinic for the community and operated by Wallace’s father, Dr. Edward O. Guerrant II, and Dr. John Hubbard until 1989.

“In 2000, the Guerrant family gave the building located at 217 S. Main St. to the community for the establishment of a museum,” the release states. “Since its opening in 2004 as the Bluegrass Heritage Museum, it has continued to grow and expand to serve the community with the help of so many wonderful people that have freely given of their time and financial resources.

“The consideration for the gift and the language in the deed states that it is intended for ‘the promotion and preservation of the history of the Winchester, Kentucky area and to educate the public about the unique heritage of our region’ and this has remained the mission of the Bluegrass Heritage Museum to continue the life-long work of the Guerrant family. “

The museum’s board is in the process of studying potential used of the home and adjacent land, “…and it welcomes the community to offer suggestions about how the newly acquired property might better serve the area and to consider necessary funding for construction of an addition to the museum as its success has already led to the need for additional space to accommodate the growth.”

A priority for the museum Board of Directors is managing the financial requirements of the new property.

“The previous owner stated that the monthly utility bills average $1,000,” the release states. “There will be additional expenses for insurance, routine maintenance, needed furnishings and needed repairs. With very limited resources, there is no room in the museum’s current budget for new expense items. The immediate goal is to find a viable use for the house that will help offset its operating costs but implementing any long-term plans will take time and much help from the community.”

Even with these financial challenges, the museum board is excited about the possibilities offered by the property.