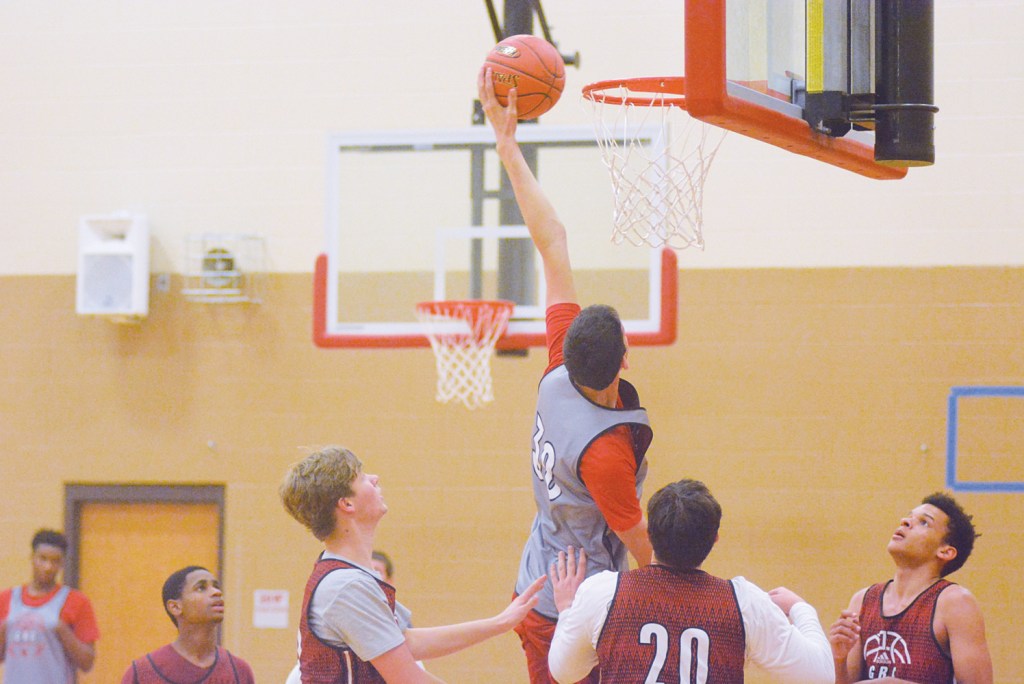 Lincoln Bush goes up for a dunk at practice Monday. (Photo by Micah Satterly)

With two weeks remaining until the new season tips off, the George Rogers Clark Cardinals are ready to take the court.

GRC lost in the 10th Region semifinals to Campbell County last season and are more than determined to make a deeper run with a new team.

Head coach Josh Cook is pleased with the leadership the team has shown in the early part of the season.

“Our leadership has been more consistent,” he said. “We are catching on to the system. We have tried to do things that relate to this basketball team, so it is a different style. We put in different principals defensively, but they are trying to adapt to it and have open minds. We got the football guys back and once everyone gets the hang of it we will be able to put lots of repetition of things we are trying to do.”

Cook said him and his team are both excited for this new chapter in the 2018-19 season.

“When one season ends, as a coach, you take a couple days off to get your mind right and then start preparing for the next one,” he said. “I think this team has a chance to have a special season. One of the things we are focusing in on is to control what we can control. Attitude and mindset are everything. If we can control those two things on the daily then we are only going to get better.”

Cook said his team’s versatile line up could give other teams problems.

“I have done a lot of explaining to some players that this is what they will have to do to have the opportunity to play multiple positions,”  he said. “We are pretty deep and this is our second week of having the football guys back. Now we are trying to put all those pieces together to get ready to play. We can dictate the style of play a lot this year with our size and guard play. We can adjust to what we need to depending on who we are playing.”

Cook admits he wants to be more tolerant to help his team be prepared for the season opener.

“I want to do a better job of being patient with our guys and add more things slowly,” he said. “I think we are going to be much better come January, but we are doing a step-by-step process with them and add pieces. It is going to take time and we understand that. We want to do a better job of going back and breaking things down. We want to help this group be fundamental and let them know what they have to do each night and put emphasis on practicing every day.”

GRC will head on the road to Bath County for the first game of the season Nov. 27.