Nailed It or Failed It: Pecan crusted chicken 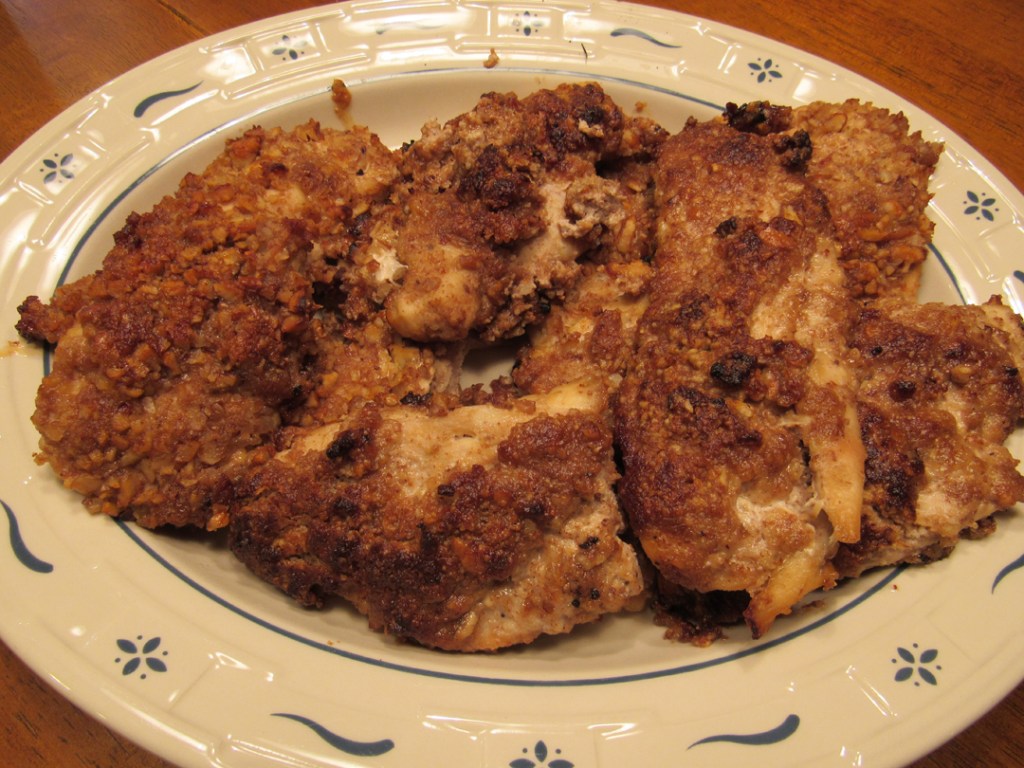 Since time rolled back, I’m barely making it home from work before dark.

I don’t want to be in the kitchen all night preparing our supper. It almost feels like it’s time to go to bed and I’ve yet to wash the dishes.

People wonder why I don’t like fall; I think it’s because of the time change.

Brad and I were on vacation for a week and ate out a lot, so when we returned home, I was ready for a home-cooked meal.

I thawed some chicken, cleaned it and placed it in a bowl of water on Monday evening, to be a few steps ahead for Tuesday evening’s meal.

I opened up my folder containing new chicken recipes that I hope to make someday.

After shuffling through them, I ended up choosing today’s recipe for Pecan-Crusted Chicken, which I found at parents.com.

The chicken needed to be pounded to one-half inch thick so I removed the chicken pieces from the bowl of water and beat them between some parchment paper.

Then I returned each piece to the bowl of water and then into the refrigerator.

I’ve made other pecan chicken recipes because we like chicken, and I always have pecans on hand. But this recipe was different from most because it called for cooking the chicken under the broiler.

I’ve only used our broiler once since we married.

I also chose this recipe because it sounded easy, and I had all of the ingredients.

When I got home from work, I turned on the oven broiler and pulled the chicken from the refrigerator to drain the wate.

The recipe called for the pecans to be ground. I figured my Ninja blender would do the job fast. I put the pecans in the container and pulsed it a few times. The Ninja did such a good job that I almost had pecan paste. Then I dumped them out on a small plate.

Mixing the honey and soy sauce was easy.

Since I didn’t want to pull every baking item out of the kitchen drawer under my ovens, I opted to use a baking sheet lined with foil to bake this chicken.

I knew the foil would make it easier to clean the kitchen afterward. I sprayed the foil with cooking spray and set the pan aside while I dipped each piece of chicken into the honey-soy mixture then into the ground pecans.

I had to work at getting enough of the ground pecans to stick to the chicken, but with a little patience, I got it done.

Once each piece was coated and on the baking sheet, instead of measuring out salt and pepper I sprinkled some on each piece.

The oven was hot and ready, and after moving one of the racks to the top third of the oven, I placed the chicken in the oven.

I set the timer for six minutes and started getting a few other dishes ready for our meal.

About four minutes, I smelled something and opened the oven door.

Yikes. The pecan crust had turned black on most of the chicken.

About that time, Brad came into the house after harvesting some of his shiitake mushrooms and asked what smelled funny.

He came over and took a peek. His eyebrows raised and his eyes got big.

I asked him if he thought I should scrape off the black stuff and see what happens. He said he thought it couldn’t hurt.

I think he thought if this chicken didn’t work out, he might be eating popcorn for supper instead.

I gently picked and scraped off the blackest parts of the pecan crust and flipped each piece of chicken over.

Instead of using the top third of the oven to finish broiling the chicken I moved the oven rack down to its normal position and lowered the oven temperature to 450. I let the chicken cook about 15 minutes.

While the chicken finished cooking, I put the remaining honey and soy into a pan. There wasn’t much left over from dipping the chicken, and I opted to add one-third cup more honey and three more tablespoons of soy sauce to the pan. I let it boil until the chicken came out of the oven.

I placed the chicken on a plate, pretty side up and everything was ready for us to eat.

Brad prayed over our food, and gave this dish a try.

Brad was first to try a bite and said it was good. I had to agree with him.

I poured some glaze on a few of the pieces on my plate and thought it was yummy. Brad said he liked the dish better without the glaze.

We continued eating until our little tummies were full and decided even though this recipe appeared it would be a total “Failed It,” it ended up being a “Nailed It”  — thanks to scraping and picking to remove the burned crust.

I’ll keep this recipe, but you can bet I won’t be using the broiler to cook it next time.

It was another lesson in reading the directions carefully before starting — and then reread them to understand what you need to do.

In a medium size bowl, whisk honey and soy sauce. Spread pecans on a plate.

Dip both sides of chicken breasts in honey and soy mixture and then in pecans. Place on prepared broiler pan. Season both sides with salt and pepper

Broil for two minutes per side 6 inches from heat source. Reduce oven temperature to 500 degrees and place broiler pan on rack on lower third of oven. Bake for six minutes or until internal temperature reaches 160 degrees on an instant read thermometer.

While chicken is cooking, place remaining honey and soy mixture in a small saucepan and boil for one minute.