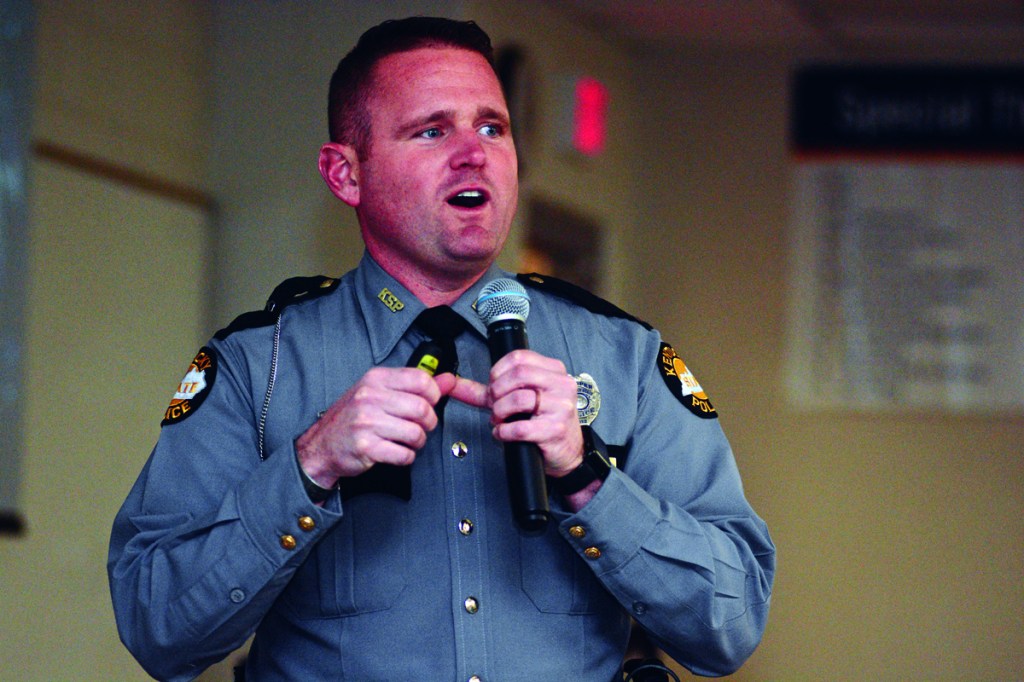 “Alright, so let me see how many cellphones I see,” Purdy said as he scanned the crowd. “I see one cellphone here. Maybe, two. The rest of y’all have computers.”

Purdy said social media could be a great tool, but unfortunately, people often use it inappropriately and incorrectly.

The problem starts when parents give their children phones but never “teach” them how to use it.

“Whenever we get somebody a cellphone or an iPhone, often, it just gets handed over, like handing over the keys to a car without ever having the training somebody needs,” Purdy said. “And so it’s dangerous. Because at this very moment, for this child, the world is at their fingertips.”

“A ton of things are going on every single second,” Purdy said. “And a lot of times, these things can have real world and horrible consequences if someone isn’t taking control of the decisions they’re making.“

if you are a parent and you’re not snooping, you’re a lousy parent. The words stuck with Purdy ever since.

Dr. Latonia Sweet, the last speaker at the event, said she thinks parents should set boundaries at the beginning and tell their children they will be snooping.

“If any of those answers are no, then I just don’t post it,” Purdy said.

Purdy said children as young as 8 years old — some even younger — are on some form of social media. He said any application, website or social media platform with a messaging capability could pose a significant danger.

Purdy also advised parents to be aware of secret apps such as an app that appears to be calculator but is used to hide photos and other files. Purdy also gave the audience a list of social media platforms and common texting lingo.

“So where is it happening?” Purdy said. “Online.”

Clark County Agency for Substance Abuse Policy (ASAP) and BCTC partnered together to present “Dangers in Plain Sight,” a three-part community education awareness series for K-12 parents and guardians in an effort to educate and bring awareness to the crucial issues of drugs, social media, and bullying and school violence that affect youth and community. Ramsey Flynn also helped to coordinate the events.

Flynn brought the idea for the series to the ASAP board after attending a presentation on the “Drugs Hidden in Plain Sight “in Madison County as part of a Leadership Central Kentucky training session. The conversations at the On the Table forums throughout the community in the spring also inspired some of the topics for the series, Flynn said.

Melissa Stocker, the ASAP board coordinator, previously told The Sun the series received two grants from the Greater Clark Foundation and the Clark County Community Foundation as well as numerous donations and sponsors to help make the series possible.

All sessions begin with a free dinner at 5:15 p.m. with the learning session starting at 6:15 p.m. Various groups will also set up tables to share information.

For people who missed the session, the presentations are available on Channel 5 or DVD.

Marvin King, the pastor at First Baptist Church, spoke after Purdy to tell the audience about what they can do with the information presented to them.

“If you’re not watching what your children or your family members are doing on social media, you are irresponsible,” King said.

“We’ve got to build relationships internally,” King said. “We’ve got to begin to understand that all of us are living in this community together, and we all can make a difference. And so I encourage parents to have conversations with your children. No longer can we get so busy with life and providing for our families, that we don’t have meaningful conversations.”

“I’m encouraging you when you leave here … make time to engage and have a meaningful conversation, spend time telling your children how much you love them, give them in a healthy identity to combat cyberbullying, and some of the things that they may hear at school because that is very real,” King said. “And if we don’t impress upon them an identity of positive encouragement, healthy self-esteem and awareness and positive identity, then someone else is going to put something else on them.”