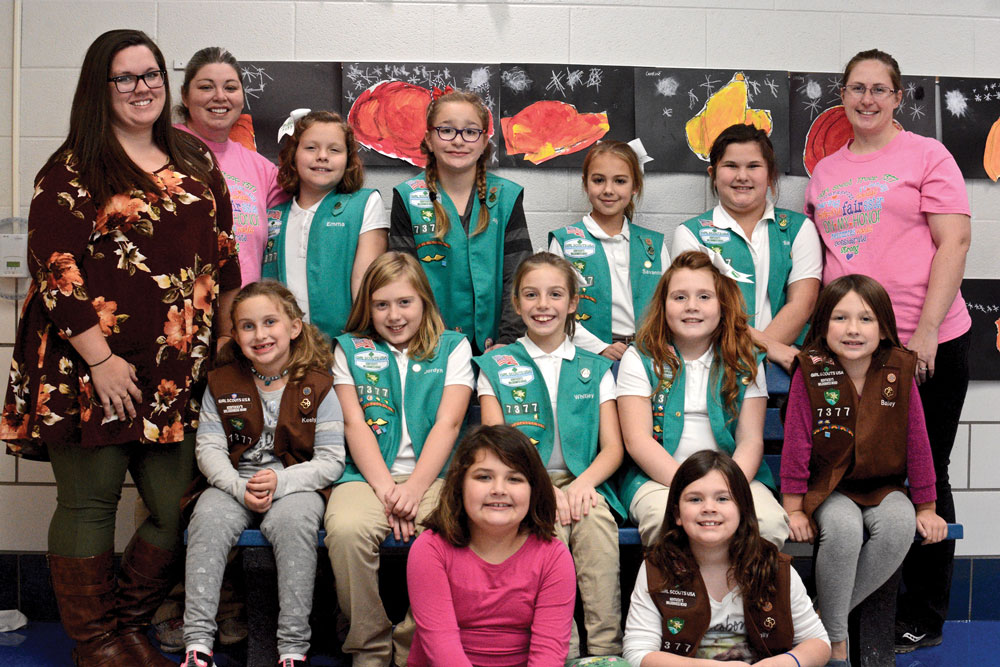 Girl Scout Troop 7377 is making the world a better place one bench at a time.

The scouts are making bottle cap benches to encourage people to recycle and in turn, make the world a better place. The project is part of a requirement for scouts to earn The Girl Scout Bronze Award.

The Girl Scout Bronze Award is the highest honor a Girl Scout Junior can achieve. Girl Scouts can pursue the bronze award if they are in the fourth or fifth grade and have completed their junior journey.

Troop leader Kyla Hargis said the bronze award is a group project that has to be sustainable.

“Sustainable is something that can last through a generation or more,” Rouse said.

Hargis said nine junior scouts are putting in 20 hours or more in planning and working on this project.

They are collecting 200 pounds of lids which will make two benches to go at Winchester’s busiest transit bus stops. Scouts have placed collection bins at Winchester City Hall as well as a few day cares around town.

Junior Scout Jordyn Hargis, 9, said the scouts also have to wash the caps. She said she had washed 35 pounds worth of bottle caps.

Jordyn said the scouts were choosing between a community garden or bus stop benches, but because the project had to be sustainable, they decided on building the benches.

Once the scouts have all of the lids they need, they will take them to a company in Indiana to have the bottle caps molded into benches.

Each bench costs about $155 for the company to make. If anyone would like to donate lids or money to help the scouts reach their goal, contact Hargis at girlscouttroop7377@gmail.com.

The scouts started working on the project in October and plan to have all of their lids collected by January.

Junior Scout Whitley White, 9, said she thinks the project has taught her how to be more mature and responsible. Junior Scout Emma Caudill, 9, agreed.

“I think we’ve learned to take responsibility for things instead of letting other people do our work, to do it ourselves,” Caudill said. “Like when we have to wash the bottle caps, it’s almost like washing the dishes.”

Junior Scout Savannah Thomas, 10, she has learned how to help the community.

“We have learned how to be the best Girl Scouts we can be and how to make the world a better place,” Thomas said.

Overall, it’s been a team effort to work toward the bronze award.

“If you have a lot of people together and you all put in group effort then we can all get all the bottle caps we need,” Jordyn said.

A bike theft, forgiveness and the kindness of strangers