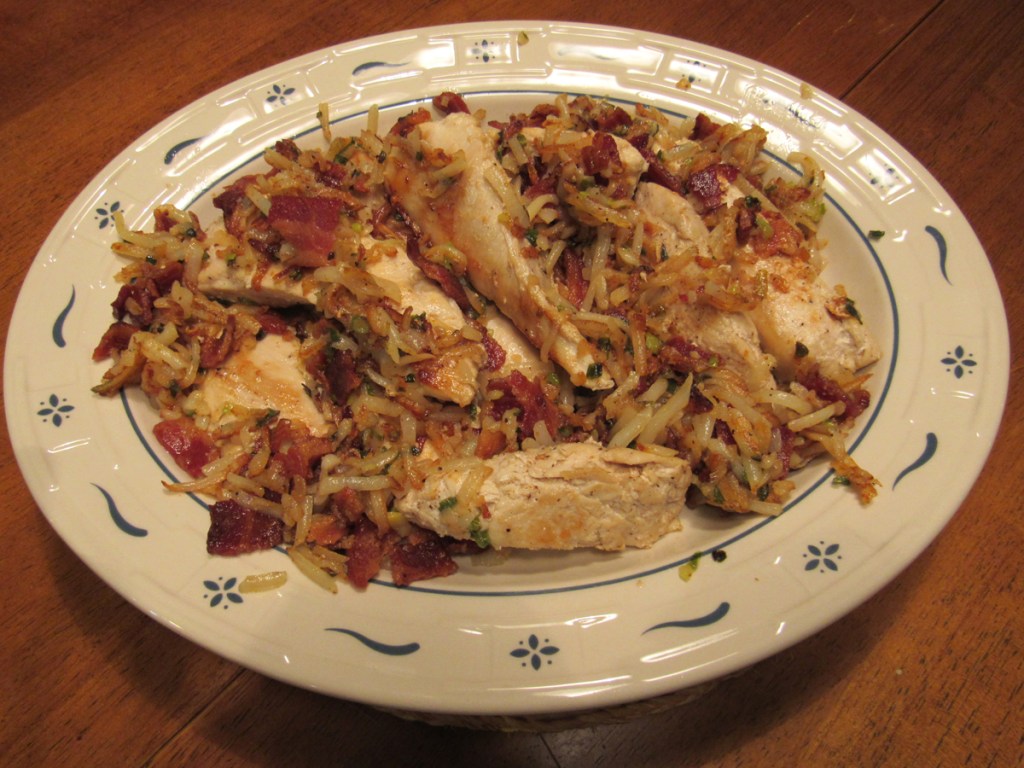 Have I mentioned we eat a lot of chicken? Here’s another recipe using it.

I’d torn today’s recipe from the January 2011 issue of “Cooking” magazine and it was hidden among the mound of chicken recipes I’ve hoarded over the years.

The picture looked yummy and the directions seemed simple.

Right now, when I get home from work, I want to get supper on the table as quickly as possible and this looked like a winner to me. The night before I planned on preparing this dish, I thawed the chicken.

Even though the recipe calls for two chicken breasts, there were three in the package I thawed and I didn’t think one more breast in the pan would hurt anything. I cut each breast in half because we prefer smaller pieces of chicken.

The only ingredient I didn’t have on hand were the green onions, so during my lunch break, I headed to the grocery and picked up a bunch.

When I got home, Brad had already started cooking the bacon and the house smelled wonderful. As you know, bacon is a staple in our house.

I got right to work and added the chicken to the bacon drippings in the skillet. It took a bit longer for the chicken to brown than the recipe stated, but maybe I just had the temperature turned too low. I was trying to keep the chicken from cooking too fast and becoming tough.

When it was time to flip the chicken, I pulled out the hash browns I’d bought over the weekend in anticipation of making this dish.

The recipe called for southern-style hash browns. Since I don’t typically buy this kind of potatoes, I’d just bought regular hash browns. I’m really not sure what the difference is.

When it was time, I sprinkled the hash browns in the pan around the chicken and continued the cooking process.

After removing the chicken from the pan, I put it in my oven, which I’d warmed, to keep it warm. I turned the heat up under the potato mixture and when the hash browns were brown enough, I added the crumbled crisp bacon to the pan and stirred. Of course, I used a little more bacon than the recipe called for, too.

I removed the chicken from the oven and poured the potato mixture over the top.

The table was set, the food was on the table, Brad said the prayer, and we were ready to eat, all before 7 p.m.

The dish looked really good and I was hungry. My granola bar for lunch had worn off and my belly was awaiting a good warm meal.

Brad and I took bites at the same time and then agreed this dish was, well, OK.

I thought the bacon made the dish and Brad agreed. We both thought it could use more hash browns, and I didn’t think it would hurt if it had a little bell pepper too.

Instead of measuring the salt and pepper I’d just sprinkled some on the chicken when I began cooking it and the seasoning was fine for both of our tastes.

This recipe was on the table fairly quick and I liked that it was prepared right in the pan, which meant less dirty dishes and I was out of the kitchen faster.

I’ll be adding this recipe to my self-made cookbook but with a few notes to tweak it just a tad here and there.

Cook bacon in large nonstick skillet over medium heat 8 to 10 minutes or until crisp. Drain on paper towels; reserve drippings in skillet.

Turn chicken; stir green onions into potatoes. Reduce heat to medium-low. Cook, covered, 5 to 8 minutes or until chicken is no longer pink in center. Remove chicken.

Meanwhile, crumble bacon; stir into potato mixture. Increase heat to medium-high; cook, uncovered, 1 to 2 minutes or until heated through and potatoes are lightly browned. Sprinkle with remaining 1/4 teaspoon salt and 1/8 teaspoon pepper. Serve potato mixture spooned over and around chicken.