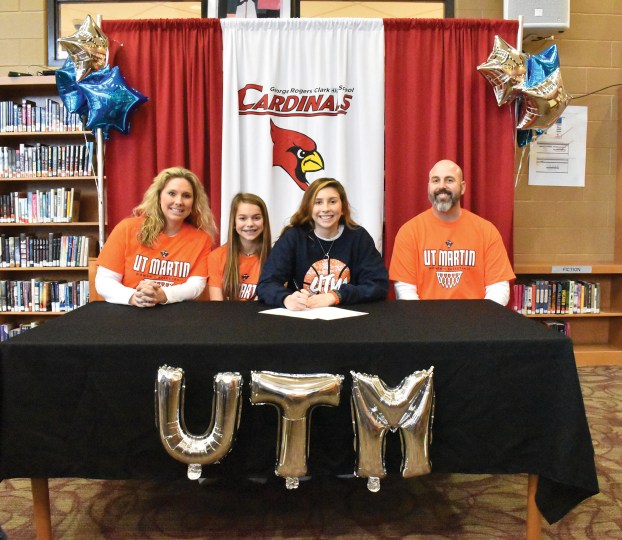 Harrison excited to continue her basketball career at UTM

Senior guard Hayley Harrison signed her letter to further her education and basketball career at the University of Tennessee Martin Monday, but knew she was going to play there over a year ago.

Harrison said she was blessed to be surrounded by close friends and family in attendance for her signing.

“I was very thankful,” she said. “When I was starting off, I did not think I would have this big of an opportunity and I am really grateful for that.”

Harrison said she instantly knew UTM was the perfect choice for her when she visited and felt really connected to everyone she came in contact with.

“Over the year that I have been committed to them they have really shown me that they wanted me and liked me,” she said. “They made me really feel like family and looking at their records I feel like I will be a part of something great which made me interested in them.”

Harrison feels like she will be able to bring her diverse skill set to help her new team win next season and for the rest of her career.

Harrison admits she is not nervous now, but knows she has a lot to look forward to in her new chapter of life.

“I feel like I will have to get used to the speed of everything,” she said. “When I get down there, I know I will get used to it. It is just the process of not knowing anything which is the most difficult part. I am excited to get down there, though. It will be cool to meet new people and I love meeting new people.”

Harrison does not want to look to far ahead yet as she still has her senior season to play and hopes to bring a state title to Winchester.

She wants to use this season as a stepping stone towards bettering herself and giving it her best on the court and in the classroom one last time before her high school career comes to an end.

“I want to give every practice and game my all,” she said. “Now it really is my last time. That is what is going to push me through this year.”

George Rogers Clark head coach Robbie Graham said UTM will be adding an important piece to their team next year.

Graham has no doubts that Harrison will fit right in.

“She has a great personality,” he said. “She is a person that gets along with everyone. With her hardworking attitude, she will definitely fit right in with the team.”

Graham said Harrison is a big piece to the puzzle for his team and knows she will have an impact every game.

“She is going to have a big role on our team,” he said. “Some of our success definitely depends on her success. She is a very important piece and she is becoming a really good defensive player. She has worked on that. There is going to be a lot of nights where she will be guarding the best players on the other team. Her leadership skills have improved a lot this year and she is definitely becoming a true leader of this team.”

George Rogers Clark senior Ethan Neal committed to Capital University last week and has no doubts he made the right... read more