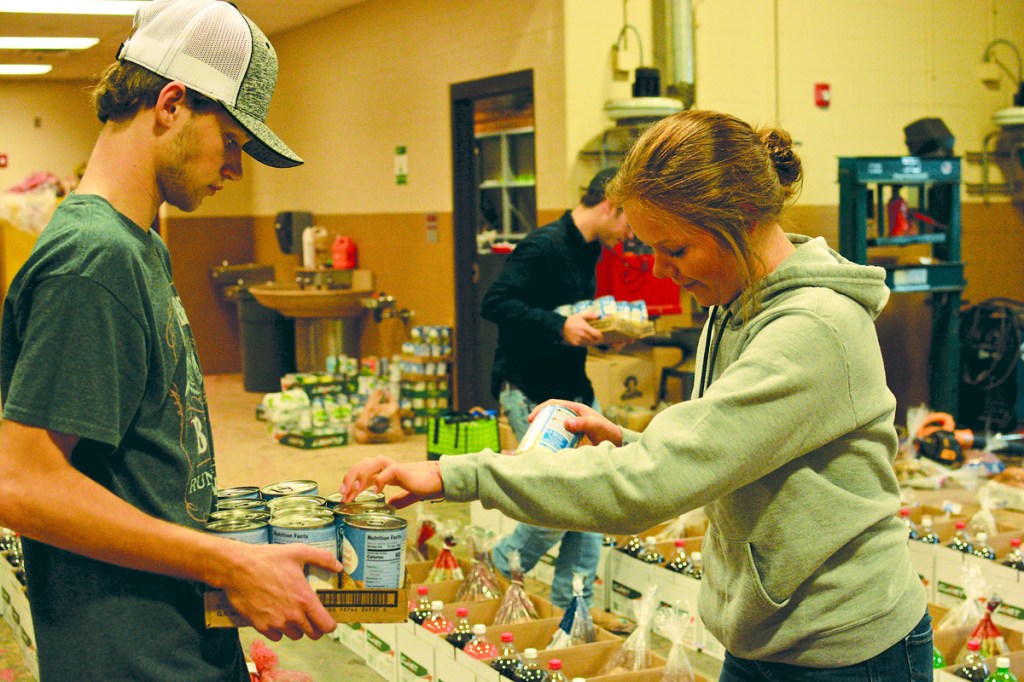 Students at George Rogers Clark School put together 105 Thanksgiving Day food baskets for Clark County families, setting the record for the most donated boxes since the food drive began in 1999.

Shane Wiseman, a GRC agriculture teacher, said the food drive had grown every year, but this year it hit an all-time high, and he hopes it keeps going.

For nearly 20 years, the Clark County FFA has paired with the George Rogers Clark High School Senior Advisory, Beta Club and other organizations in the school to collect items for Thanksgiving food baskets. The students put the baskets together Tuesday and delivered the food Wednesday.

Terra Pigg, a GRC agriculture teacher, said they started collecting food around the start of November.

GRC junior Maddy Williams started donating food to the drive her freshman year, beginning with a donation of about 20 boxes of food. Last year, she doubled her contributions to 40 and this year, she raised enough money to buy about 50 boxes worth of food.

“I’ve always had a passion for serving others,” Williams said. “And when I learned that FFA was doing Thanksgiving baskets, I thought that’s a great project for me.”

Before attending GRC, Williams said she went to a private Christian school where they often would complete service projects, so she knew she wanted to foster that passion for community service into something at GRC.

The Thanksgiving Day food basket drive is open to all classes, with some competing to see who can bring in the most food.

Williams said it’s important to have these types of services available for families in Clark County.

“A lot of people don’t realize the situation a lot of people in our county are in,” Williams said. “I didn’t. When I started this, I had no clue that there were this many in Clark County who are in need. So, when I found out, I was like, wow, we need to do something to help them.

“… You would think Thanksgiving is something everybody does, but a lot of people may not be able to afford it. So, with us doing this, we’re giving people a Thanksgiving.”