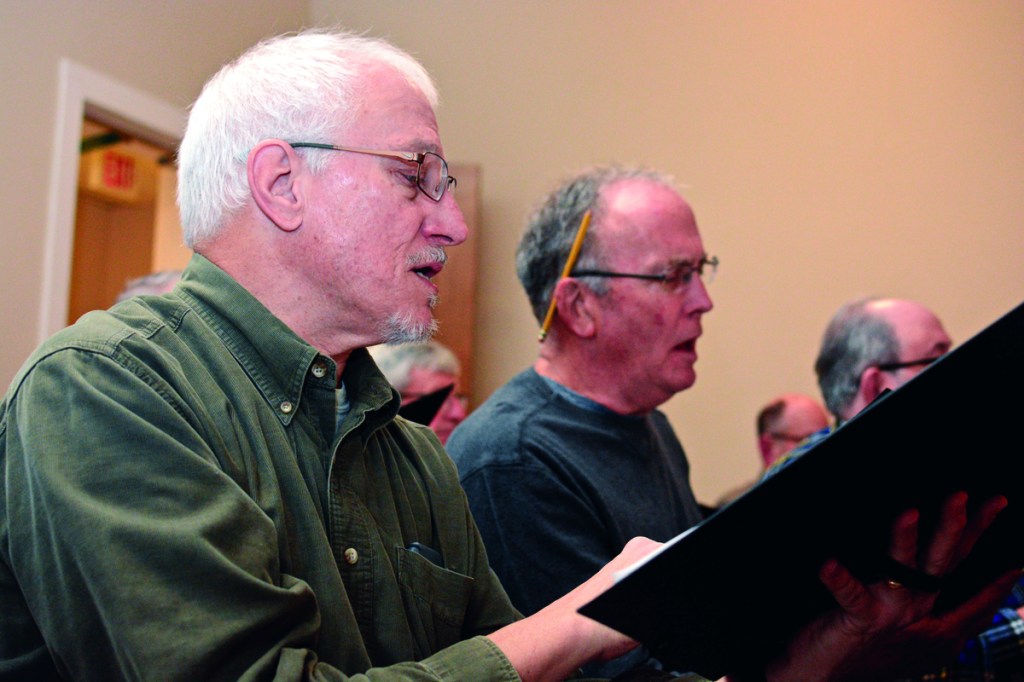 Jim Cowan, a singer in the Winchester Chorale, rehearses for the upcoming Christmas concert.

When the Winchester Chorale starts singing, it means Christmas is near.

“Several people tell us that the concert kicks off their Christmas season,” Case said. “So, know that when the chorale stands up … it’s going to be Christmas.”

The chorale’s winter show is titled “Voices and Hearts as One” and will feature guest cellist Nicola Rohr. Shows both begin at 2:30 p.m. Dec. 1 and Dec. 2.

Case said members previously performed the concert in the evening but due to conflicts with the Christmas parade, have pushed it to an earlier starting time in the afternoon. Case said she encourages people to stick around downtown after Saturday’s concert as the Christmas Parade begins at 6 p.m.

Both performances are free, but the chorale welcomes donations. All donations gathered help to cover the chorale’s operations and expenses. Handicapped accessibility is also available.

The chorale began in 1993, under the direction of then-conductor Gayle Price. Several members of the chorale have been performing in the group for 10 years or longer. The chorale is made up of singers from a variety of churches.

Some of the songs for this year’s show include: “Pilgrims’ Hymn;” “Lo, How a Rose” with soloist Kathie Ledford; “The Hands That First Held Mary’s Child” with Nicola Rohr playing the cello; “Jingle Bells Rondo;” “The Singing Heart” with soloist John Goodman and the handbells; and more.

Case said some of the songs this year come across more solemn than the usual jolly lineup, as the chorale director wanted to commemorate World War I through the music. Case said many of the songs also reflect the current climate of turbulence and conflict across modern society.

Chorale Director Michael Dunn said 2018 marks the 100th anniversary of the end of WWI, the “war to end all wars.”

He said the concert this year is inspired by the Christmas truce in 1914 during which roughly 100,000 English, French and German troops ceased hostilities to offer holiday greetings, mingle and even exchange gifts.

“Our sincere wish for this holiday season is for the end of all conflict, hatred, jealousy, bickering and strife,” Dunn said in a statement. “We can’t live our lives alone; we need each other. Now is the time to rekindle kindness and compassion toward each other so that peace and civility may be the norm.”