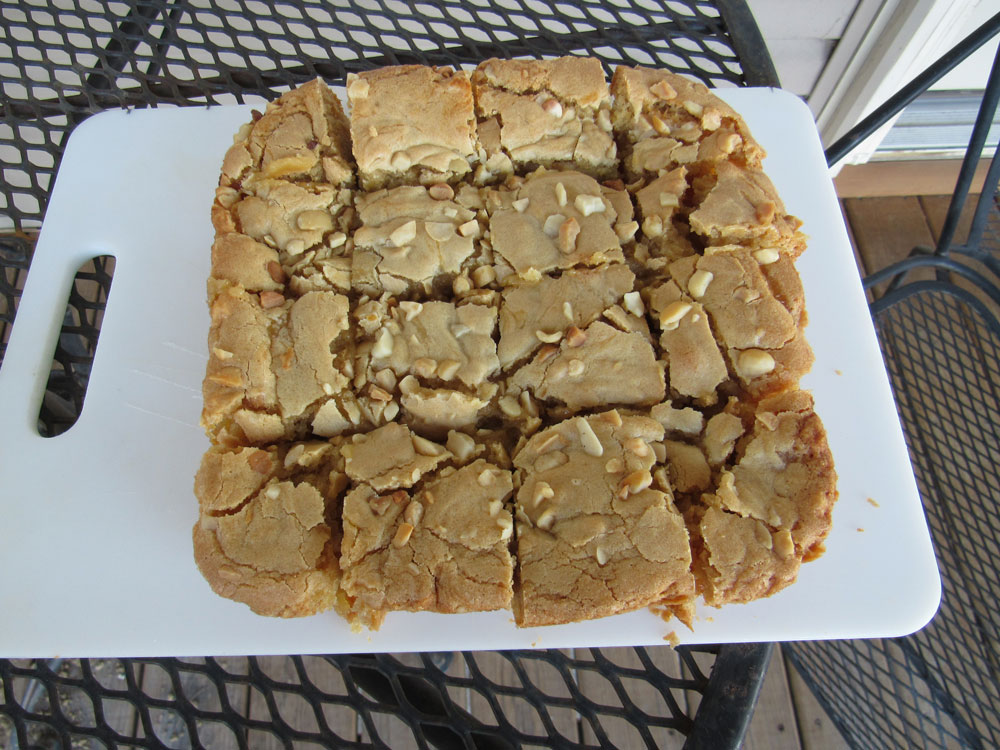 One day, I was looking through the large stack of dessert recipes I’ve saved over the years searching for a little something to bake when I stumbled on to this recipe for Lush Lemon Blondies.

The booklet included several recipes that were tempting to try.

In a bowl stir together flour, baking powder, and salt. In another bowl beat butter with an electric mixer on medium for 30 seconds. Add brown sugar and granulated sugar; beat for 5 minutes. Add eggs, one at a time, beating well after each addition. Beat in vanilla. Gradually add flour mixture, beating on low until combined. Stir in 1/3 cup of the macadamia nuts.

Spread one-third of the batter in the baking pan. Drop large spoonfuls of lemon curd onto batter at 1-inch intervals. Top with the remaining batter. Gently swirl a knife through batter and lemon curd layers to marble. Sprinkle with remaining macadamia nuts.

Bake about 30 minutes or until golden and set. Cool in pan on a wire rack. Remove bars from pan, using the foil to lift bars. Place on cutting board; cut into bars. Makes 20 bars.

It was late when I found this recipe. I didn’t have lemon curd and wasn’t going to make it right before going to bed. I decided I’d just stop by the grocery the next day and pick up a little jar.

The next day, when supper was in the oven, I started making this recipe.

While my oven was pre-heating, I softened the butter by placing it on its end on a saucer. I filled a tall glass with hot water and let it sit for about 10 minutes. I poured the water out and then placed the glass over the stick of butter and let it soften. Hard to believe, but this actually works.

By this time, the oven was preheated and I placed the macadamia nuts on a small pan and put them in to toast. I checked on them after five minutes and they were not toasted, but they were ready after an additional five minutes. I removed them from the oven to cool.

After lining a nine-inch square baking dish with foil, I greased it and started putting the batter together. It went together quickly and I used my hand-held mixer to combine the ingredients.

Tina, a friend of ours, visited the Dominican Republic not too long ago and brought me some vanilla. I decided this would be the perfect recipe to try it in.

When the batter was combined and the nuts had been added, I scooped out about a third of the batter and spread it in the pan.

I opened the jar of lemon curd and scooped out spoonfuls and dropped it on the batter.

Then I put the rest of the batter on top of the lemon curd.

I used a butter knife to swirl the top layer of batter and the curd.

I put the dish in the oven and set the timer for 30 minutes.

When time was up, the blondies had not started to brown and the entire thing was still jiggly.

I slid the pan back into the oven and set the timer for an additional 15 minutes.

The timer sounded and I noticed the dish was almost set and had begun to brown so I let it cook another five minutes.

I removed the pan from the oven and let the blondies cool.

Before going to bedt, I had to try one. I removed the blondies from the pan by grabbing the overhanging foil and lifting.

I removed the foil and placed the nine-by-nine-inch block of dessert bars on the cutting board. I sliced the entire batch.

I took a bite and decided they were pretty good. Brad tasted them, but as usual, he thought they were a bit sweet, but he liked them.

I could really taste the vanilla in these blondies.

Brad looked up Dominican vanilla on the internet and every thing he read about it said it was double strength.

I took a couple of blondies to work for one of my co-workers, Michala. She took them home and the next day, she let me know she thought they were delicious.

My mom’s birthday was coming up and since she loves lemon, I decided to make them for our little get together with her.

Of course, she liked them and the others who were there shared her sentiment.

When I made these blondies the second time I didn’t use as much of that vanilla and they still tasted great.

These lemon bar cookies live up to their title of “lush” and this recipe will be part of my self-made cookbook.

I also love the fact this recipe only makes a nine-by-nine-inch pan, which is perfect — not too much dessert, but just enough.