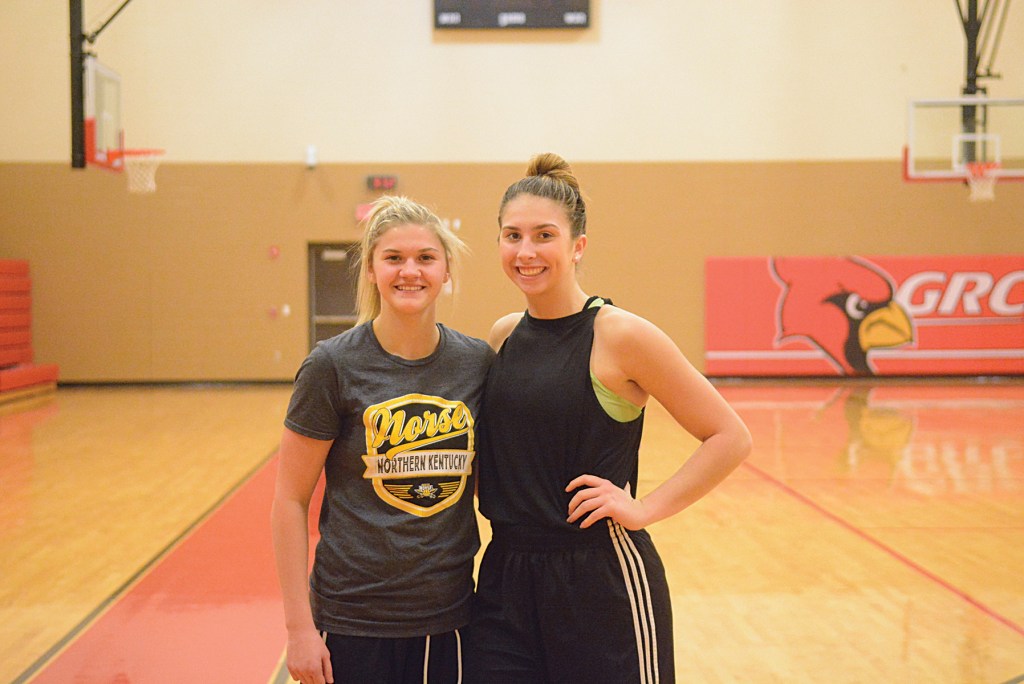 Guards Kennedy Igo, left, and Hayley Harrison, right, are ranked in the top-25 players in the state according to the Louisville Courier Journal. (Photo by Micah Satterly)

Junior Kennedy Igo and senior Hayley Harrison were ranked among the top-25 players for the upcoming season according the Louisville Courier Journal.

Harrison ranks sixth and Igo ranks 12th out of all the players in the state.

The two guards have helped lead GRC to back-to-back 10th Region championship titles and an appearance in the Final Four last season.

Igo and Harrison are both extremely excited to get the season started as the Cards host Sacred Heart Wednesday.

“We all are really looking forward to this season,” she said. “We have four starters coming back and a few on the bench that will help us out a lot,”

Harrison said she believes her team has been giving their best efforts in the preseason.

“I definitely feel like we have been pushed harder this year than past years,” she said. “We have ran a lot more preparing for our first game to put in the extra work to get into shape.”

Igo said the her preseason ranking is cosmetic and does not plan to change anything.

“It makes me want to push harder,” she said. “To be honest, I do not pay attention to it and it is not going to affect me. I am still going to play the same game and do whatever it takes to help my team win.”

Harrison said she will use it as motivation to prove she deserves to be among the top in the state.

“If I know I am number six, I am worried about being number one,” she said. “It is going to push me harder each game to let people know I should be ranked higher than what I am. Other than that, wherever I am supposed to be on the court I will be there and wherever help is needed I will be there.”

Igo said her team’s speed of play will be one of their advantages.

“We are going to have to push the ball a lot more,” she said. “We are all guards so we will outrun of a lot teams. If we get more layups we will get more points which leads to winning more games.”

Harrison said her team will have to learn how to rebound because of their size.

Igo said her team needs to stick together and not listen to outside opinions if they want to return to state this year.

“We cannot listen to what other people say,” she said. “Last year people were telling us we were overrated and it did not get to us. We just played our game and we won.”

Harrison said the team’s connection will need to be key.

“I think we need to come together more as a team,” she said. “We were a little separated the past two years. This year it feels like we put our differences to the side and agreed that we all want the same goal.”