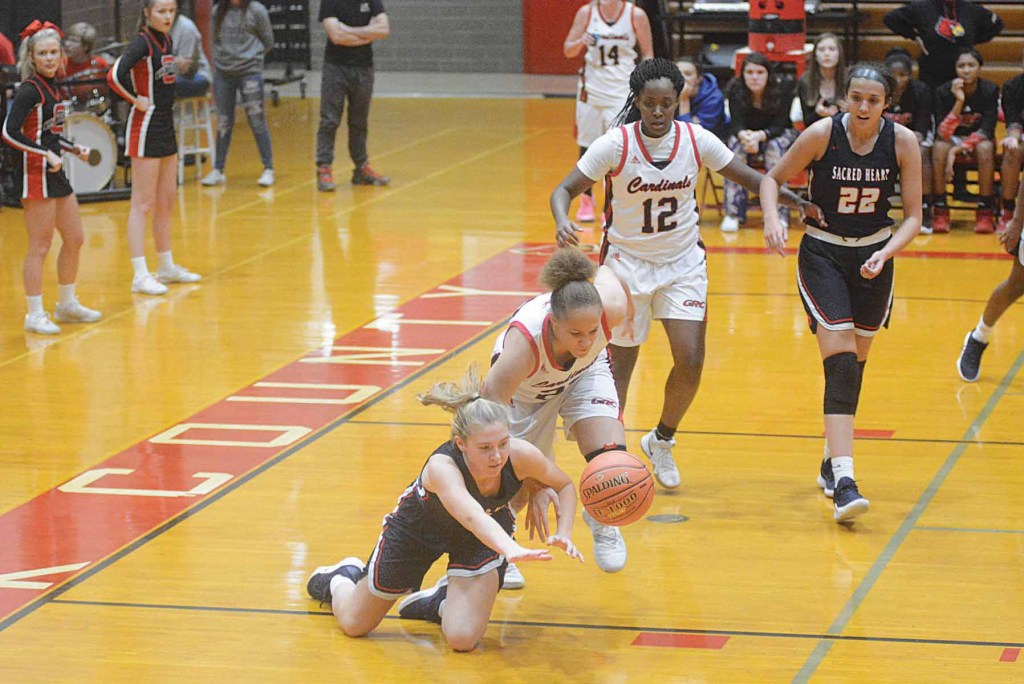 Tyra Flowers dives after a loose ball in the first half of GRC’s 77-62 win over Sacred Heart in the season opener. (Photo by Micah Satterly)

The George Rogers Clark Cardinals opened up the season with a 77-72 victory over the Sacred Heart Valkyries.

GRC took a 75-39 beating last year on the road when they opened the season at Sacred Heart and the Cards were able to redeem themselves.

The Cards had a 18-16 lead after the first quarter and both teams showed signs of rustiness from not being in a game since March.

GRC opened up the second quarter with a 7-0 run and outscored the Valkyries 19-9 to have a 37-25 lead going into halftime.

The Cards controlled the rest of the way.

Senior Hayley Harrison led all scorers at halftime with 11 points, 2-2 from three-point range and

Kennedy Igo and Maleaha Bell both chipped in nine points.

Head coach Robbie Graham was pleased with how his team was ready to play.

“We went there last year and got spanked,” he said. “I know the girls remember that. I am never one for revenge and I have never believed in that, but we were ready to play. We have been practicing really, really well and our effort has been tremendous. Defense has been really good and we have been working really hard on that.”

The Cards finished the game shooting just below 50% and shot an astonishing 69% from three.

Graham said those percentages come at no surprise to him.

“Our kids shoot a lot,” he said. “They are always in the gym and are constantly wanting to get in there. I am glad their hard work is paying off. Sacred Heart is a good team and are well coached. Coach Moir is one of the best to walk the sidelines. They have a really good player who is out with injury who well help them get better. We are definitely excited to get the win.”

Graham admits he could tell his team had the jitters in the first couple of possessions of the game.

“Our nerves got to us and we were a little jittery,” he said. “We had a great crowd and kudos to them. We challenged the girls to invite people to games. I tell them if they can get them here then they will like the product and will come back. The crowd was really in the game and I thought we came out a little jittery. We settled in and did some things we wanted to do.”

After only losing one starter from last season, Graham said leadership and experience with this team will not be a problem.

GRC will return to Campbell Monday, Dec. 3 as they will host Simon Kenton, a team who joined the Cards in the Sweet 16 tournament last season.

Graham said the game Monday could potentially set the tone for the rest of the season.

“They are a good team and very well coached,” he said. “Coach Stowers is someone who I have a lot of respect for and I have tried to steal some techniques from him. He has been doing this for a long time. His teams always play hard, aggressive and have a tough man-to-man defense. It will be one of those tough, out of region games that will hopefully help us get ready for postseason play. It will be a battle and we are looking forward to a tough, hard-nosed battle again on Monday.”