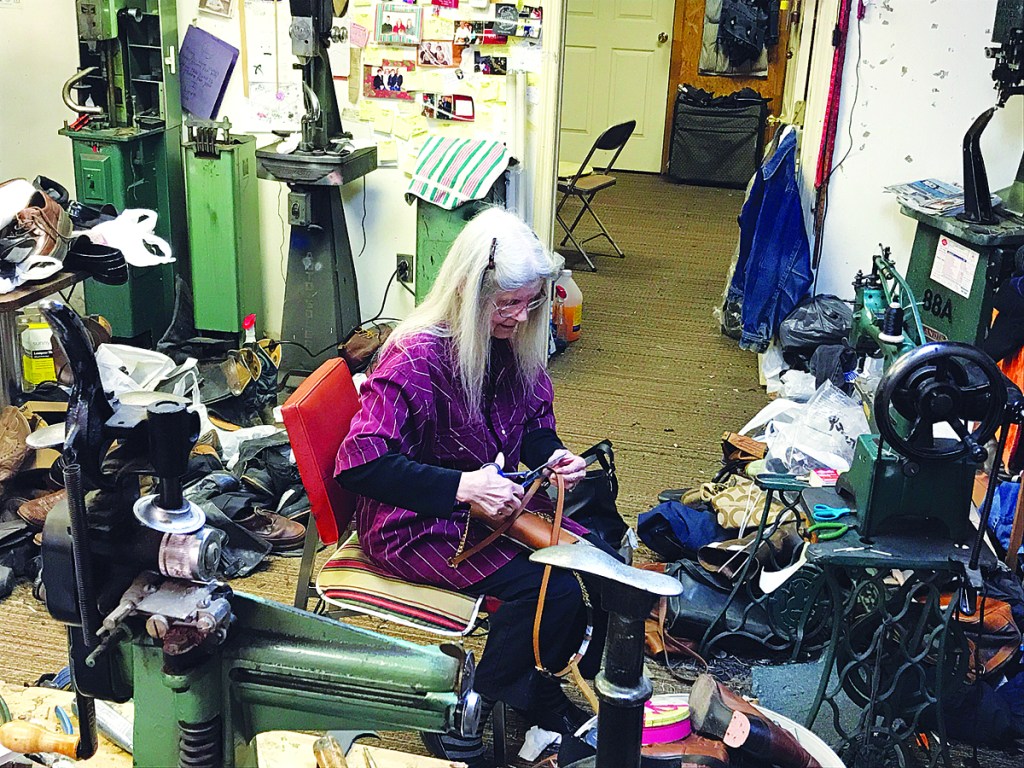 For more than four decades, Janet Watts has fixed shoes, boots, purses and many other things for the people of Winchester, Clark County and their friends. At age 73, Watts still works several days a week from her storefront on North Main Street, the shop’s fourth location in Winchester. Saturday, she will be honored as the grand marshal of Winchester’s Christmas parade. The Breathitt County native took a few minutes between customers to speak with the Winchester Sun recently.

How did you get started?

JW: “I’m from Breathitt County. We moved to Indianapolis with my husband to get a job. He worked at Stokley Van Camp, a canning factory there. He was not a factory fellow. He was 22 when we got married, I was 18, one month and one day. I was a virgin bride. It was three months before I graduated high school.

After school got out, we moved to Indianapolis. … That’s where we learned shoe repair.

My husband went to this same shoe repair shop that was on the main drag in Indianapolis.

He took in a boot of our son’s (to get repaired) and that cobbler charged him 50 cents. My husband fussed about it just to aggravate him.

That fellow said, ‘If you don’t like it, you can buy the place. It’s for sale.’

It was a shoe repair place on the front of a house. When we moved into that house, we knew nothing about shoe repair.

That guy was fixing to retire and build a house in the country. (My husband) was a salesman at heart. That man came in every day for a year to teach my husband the business. I ended up learning it.

We went into debt to get the machinery to better produce. The company we bought the machinery from asked my husband to go to work for them, so that left me stuck in the shop with four little towheads. .. We had two shops in Indianapolis at one time.”

WS: How long did it take you to learn how to fix shoes?

JW: “It was a year before I decided to put a sole on a shoe.

I used my own shoes and I think I put them on backwards.

I was in there all the time. I think I learned along with my husband.

I remember I would do things and I thought for sure (the former owner) would not have done it that way and I thought it was better.

It was a very established shop. People would leave shoes at the door at 6:30 or 7 a.m. on their way to work. I think we opened at 10. We were there 12 years and five of that was in shoe repair.”

WS: What about working on shoes appeals to you?

JW: “I had a little lady come down to the shop who had a pair of shoes that looked like the needed to be thrown in the trash. She said, ‘I want to see this shoe when you get finished with it.’ That’s it, taking something old that looks like its ready for the trash and making it new. Brand new secondhand is what I say when I’m finished with a shoe. I like working with my hands.”

WS: How have shoes changed since you have been fixing them?

JW: “That’s a good question. The last survey I had (showed) over 96 percent of shoes are non-repairable. That’s why there’s no shops anywhere.

I was talking to my finder, that’s what a shoe supplier is called, and he said that shoe repair is on the way back. I think it may be big metropolitan areas. It’s not the small old-time shoe stores.

You don’t change a heel. It’s all in one piece and vulcanized on there. I’m going to try and glue it back together but it may not hold.

That’s what’s happening to the shoe industry. They’re making them where you can’t repair them, like TVs and washers.

It’s been that way for quite a while now. Even the companies that make our supplies have gone out of business.

WS: How have you been able to keep the business going?

My husband, when we were in business together, died in 1990. I was 45 and I thought I was too old to go somewhere and get a job.

I knew shoe repair and I loved what I did and I loved my customers, so I just stayed in here.

It’s dwindled since then in making money… “

How long do you think you’ll keep working?

JW: “I don’t know. I actually thought about retiring.

I was closed this summer for 11 weeks, taking care of my mom. It was a have-to thing.

Last year, I really didn’t make enough to pay me to be in here. I have a hard time changing, I guess.

I should be retired. It keeps me motivated.

When I stayed off for 11 weeks, it was really a rest I had needed for a long time.