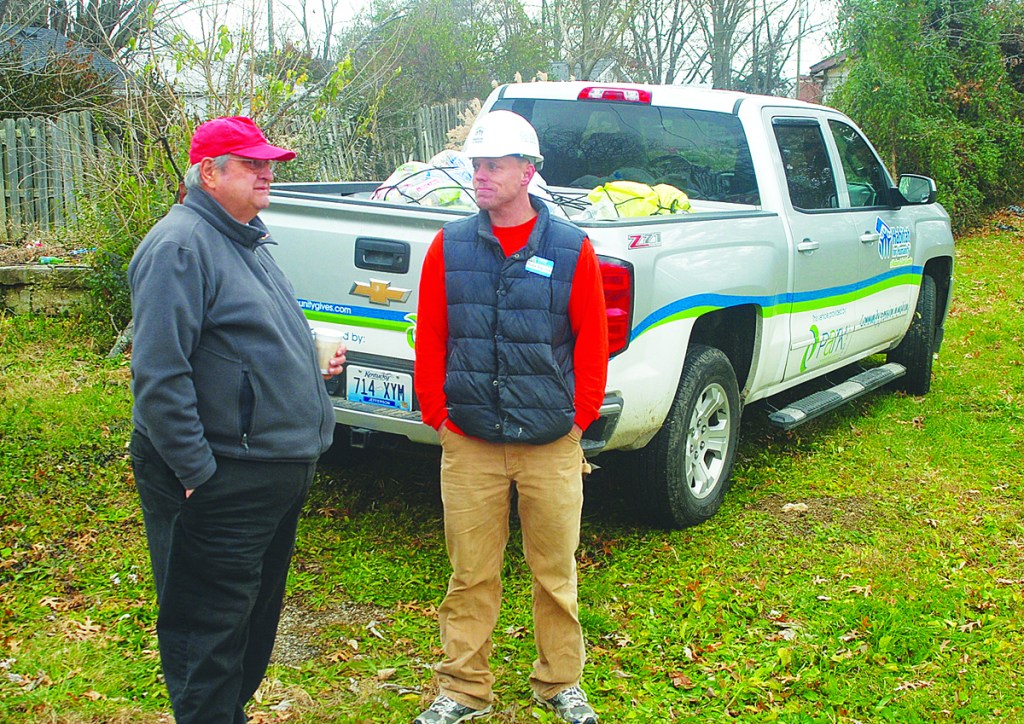 Winchester Mayor Ed Burtner, left, chats with Habitat for Humanities of Madison and Clark Counties Thursday morning along Lincoln Street in Winchester. As part of its Goodgiving Challenge fundraising efforts, Barclay spent the day on Lincoln Street. As donations were made Barclay received additional items to stay warm or out of the elements. (Photo by Fred Petke)

On a frigid Thursday morning, the executive director of the local Habitat For Humanity chapter stood alongside Lincoln Street without a coat, gloves or other warm weather gear.

Throughout the day, Russ Barclay hoped donations to Habitat’s GoodGiving campaign would allow him to add more things to block temperatures in the 20s, as he planned to stay on the property all day.

“The funds we are able to raise and get matched will be for having ownership classes for (home) owners on Lincoln Street,” Barclay said.

As donations reached increments of $300, Barclay received another item to stay warm or out of the elements. By later Thursday afternoon, Barclay’s conditions had improved to include a tent, a lawn chair, a hooded sweatshirt and a warmer hat.

Habitat for Humanity of Madison and Clark Counties is one partner in a major project to reshape and redevelop Lincoln Street near downtown Winchester. The project, which was announced in 2017, will replace the infrastructure in the neighborhood, demolish several homes and consolidate 18 small lots into seven larger lots on the west side of the street for new homes. Barclay said Habitat plans to build five homes in the first part of the project.

If the entire project, and both sides of Lincoln Street, is completed, up to 30 properties could be involved.

In March, the City of Winchester received a $1 million Community Development Block Grant for the project from the Department of Local Government. The city pledged $632,000 and Habitat has set aside $400,000.

Thursday, Barclay was talking with residents as the passed, including one person who has lived on Lincoln Street for 40 years.

“He was excited about it,” Barclay said. “It will be a game changer for this community.”