Nailed it or Failed it: Pineapple coconut chess pie 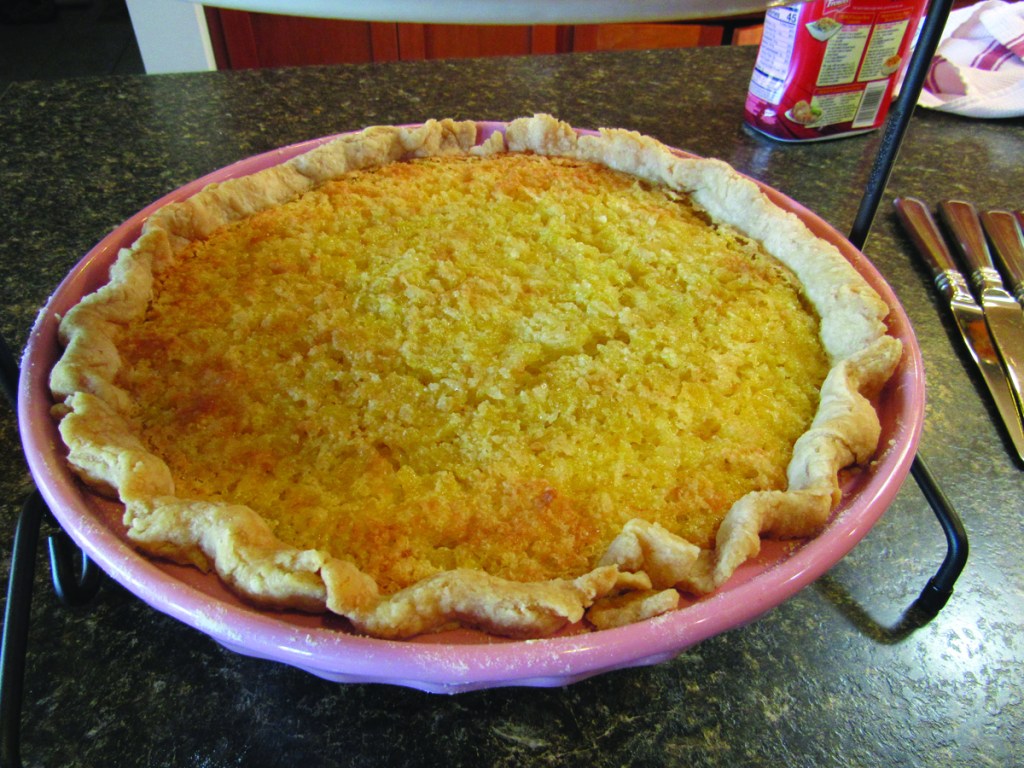 I was in Thanksgiving meal planning mode when I ran across this recipe in my stash. Typically for Thanksgiving, I prepare pies instead of other desserts. I guess I think we should have pie for this holiday.

I always fix a chocolate chip pie because it’s Brad’s favorite. Then I waver between making a pecan or chess pie because I love both. Then I just try and decide if I want to make another kind or not.

This year I made an apple pie because it’s my brother’s favorite. I used to make a pumpkin pie, but my daughter-in-law, Katelyn, has taken that chore from me and makes hers totally from scratch — including scraping the insides from a pumpkin for the filling; I’ve never gone that far to make a pumpkin pie; I just use Libby’s.

Combine the first four ingredients in a large bowl.

Stir in butter, coconut and pineapple.

Pour into an unbaked pastry shell.

Bake at 350 degrees for one hour or until set, covering with aluminum foil after 40 minutes.  Cool on a wire rack.

The title caught my attention. I like pineapple and coconut and wondered how the combination would be in a pie.

I prepared our family’s Thanksgiving meal, so I took the afternoon of Thanksgiving eve off to could begin getting everything ready for the big day.

Late in the afternoon, I began putting the pies together.

I made the chocolate chip one first because it’s so simple to put together. While it was in the oven, I starting putting together the Pineapple-Coconut Chess Pie.

Chess pie is one of the easiest pies to make. The ingredients are typically simple and you just put everything in a large bowl, mix it, pour it into your pie shell and bake it.

The first thing I did was open two small cans of crushed pineapple and let it drain while I gathered the other ingredients.

I poured the sugar, cornmeal, flour and salt into a bowl and mixed the ingredients.

I only had one large egg and the remaining three dozen in the refrigerator were extra-large. In a recipe that doesn’t require too many eggs, large and extra-large are pretty much equal so I knew I was safe using the extra-large variety in this recipe.

After adding the eggs and vanilla and stirring a bit, I melted the butter in the microwave and poured it in along with the coconut and drained pineapple.

I stirred the batter until everything was incorporated, then poured it into the crust I’d made a little earlier.

I make my own crust. It’s so easy and so much better than store-bought.

I slid the pie pan into the oven and set my timer for 40 minutes.

When the timer sounded, I placed non-stick foil on top to keep it from browning too much.

I set the timer for 20 more minutes, and when the timer sounded for the second time, the pie was done.

Chess pie is done when you gently shake it and the center is set but has a slight jiggle.

On Thanksgiving day, when early evening arrived and our family had gathered, we all joined hands and Brad offered the blessing.

Everyone filled their plates and gathered around the dining room table.

When everyone had had their fill of the meal, I asked if they were ready for dessert. Everyone kind of got big eyed and said, “Maybe later.”

Maybe later? Didn’t they know I’d spent a good deal of the previous afternoon baking for them?

Well, “maybe later” rolled around and one by one, people headed back to the kitchen for dessert.

A few tried the Pineapple-Coconut Chess Pie. I was the first one to cut into it.

My daughter-in-law thought the altered chess was pretty yummy.

Because there were so many pies to choose from, there was plenty of Pineapple-Coconut Chess left over.

So on Black Friday I took a piece to my co-worker, Michala. I also took a piece to Debbie, a lady I’ve met through my work. She likes to bake and I’d mentioned to her I was going to make this pie for the holiday; she thought it sounded good — she likes chess pie too.

Michala decided to eat her piece of pie mid-morning. Her observation was, “Oh my, this is so good.” Debbie called me and let me know she thought it was delicious.

This recipe will be added to my self-made cookbook. However, after eating a couple more pieces of this pie over the weekend, I decided though I like it, I like regular chess pie better.