GRC pulls away from Simon Kenton to earn second win 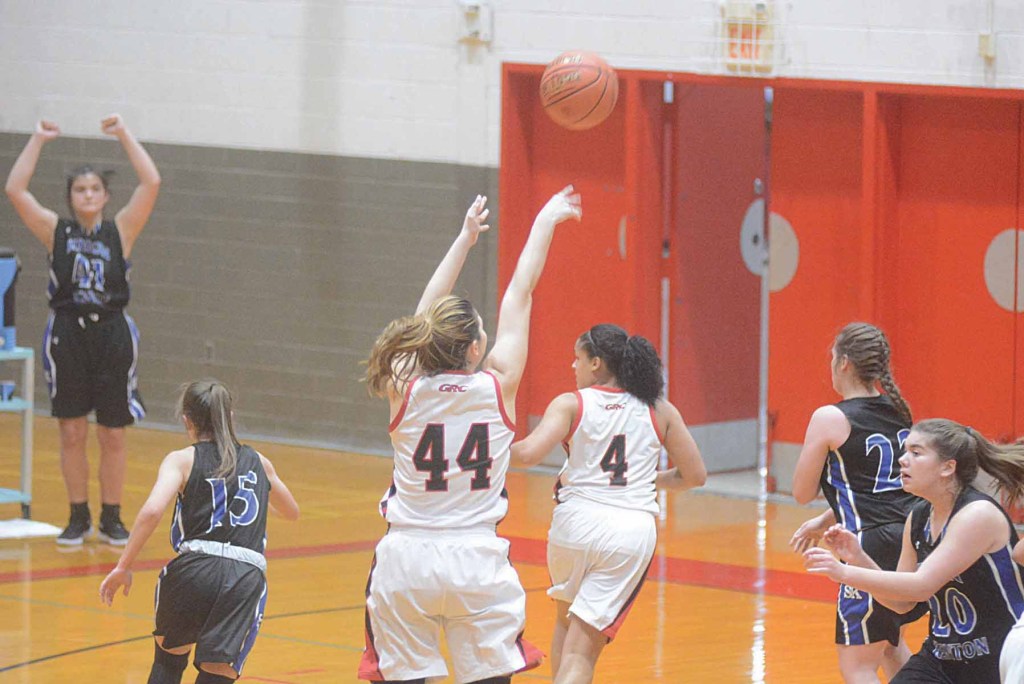 Hayley Harrison (44) drains a three in the first half. She led all scorers with 24 points as GRC ran away with a 58-43 victory over Simon Kenton Monday. (Photo by Micah Satterly)

The George Rogers Clark Lady Cardinals pulled away from the Simon Kenton Lady Pioneers to seal a 58-43 victory as the Cards improve to 2-0 on the season.

The first half was a tough defensive battle as neither team could get shots to fall early on.

Kenton led GRC 11-6 at the end of a low scoring first quarter.

The Cards opened the second quarter with a 7-0 run as Hayley Harrison, Shelbi Wilson and Jasmine Flowers earned quick buckets.

From that point on, the game was fully controlled by the Cards.

A three-pointer, a steal and wide open lay ups helped stretch the lead for the Cards.

Head coach Robbie Graham admits it was an ugly game.

“We went and scouted them and knew it was going to be an ugly game,” he said. “We knew they would want to control the tempo and they are very, very well coached. He is one of the best to do it and I have a lot of respect for coach Stowers. He hangs his hat on defense like we do. They are tough, physical and hard-nosed. We did not box out in the first and second quarters which really punished us. They got a lot of second shots.”

Graham said his team played brand new from the second half until the end of the game.

“We went on a big run,” he said. “We got hot there for a while and Hayley made some big shots. We did a much better job of team rebounding. We were able to push the lead out a little bit, but small mistakes allowed Kenton to pull back on us. We went away from a lot of defensive fundamentals that we work on daily. We will get back to practicing on that and hope we have a better performance on Wednesday.”

Overall, Graham said he likes what he sees from his team so far but was expecting some early season rust.

“I am pleased for the most part,” he said. “There are some things we have to work on, but it is only game two and we do not want to be playing our best basketball right now. We have 28 more to go. It is a marathon and not a sprint. We want to be playing our best when it gets down to the end. We want to keep progressing. We have to clean up the little things like boxing out and defensive rotations. We will get better at those things though and we will keep grinding away.”

Graham said his team executed much better in the second half.

“They were switching a lot of our screens and were being physical on the screens,” he said. “I think it put us on our heels and bothered us a little bit. We did a much better job of staying with our stuff and ran it. A lot of the times if option one is not there we want to just shoot it or whatever. We wanted to execute and we ended up doing that.”

Harrison was the only scorer in double figures for GRC as she led the way with 24 points including 3-4 from deep.