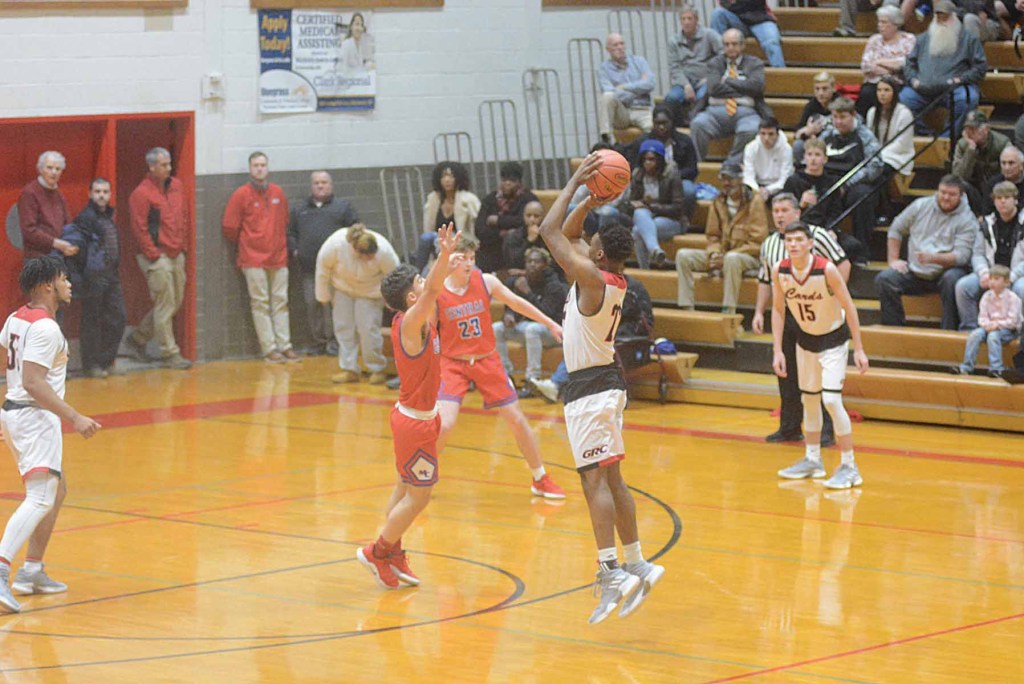 Jordan Graham drains a three in the first half of GRC’s 57-46 win over Madison Central Tuesday. Graham led all scorers with 19 points to help the Cards improve to 2-1. (Photo by Micah Satterly)

The George Rogers Clark Cardinals came out with a 57-46 victory over Madison Central Tuesday in the Cardinals’ first home game of the season.

GRC started out hot as they started the game with an 11-1 lead as Central was forced to call a timeout to slow down the pace.

Jordan Graham scored the first basket of the game with a floater off the glass and went on to drain two threes the next two possessions for a quick nine points in under two minutes.

Central’s drive-and-kick game pulled the game back within reach as they found open shooters behind the arc to knock down threes.

GRC continued to control the pace from there.

“It was a good win,” he said. “I was really proud defensively. Our game plan was good and so was our effort. I think our depth played to our advantage. There are some things I want to clean up and do better, but it is definitely a step in the right direction.”

GRC bounced back from a 57-48 loss to Campbell County on the road last Friday.

Cook said his team did a better job of staying on the same page and working together than they did against Campbell.

“We did a good job of communicating,” he said. “It needs to keep improving. I thought it was better, though. After the first three or four minutes of the game I thought our guys had an excellent stretch of communicating in the second quarter. We have to close that up though and the fourth quarter needs to be played like every possession matters. Our guys showed some character and some growth tonight.”

In the third game of the season, Cook is proud of his team so far.

“I told them they have been through a lot already,” he said. “I told them they are nowhere near where they need to be. We are still climbing which is a good thing and are looking to improve. If we can continue to do that over the next few months then it will really help us improve.”

The Cards will get an early season test Friday as they will host UK commit Dontaie Allen and Pendleton County Friday.

Cook said the game will be a battle.

Graham led all scorers with 19 points, shot 4-5 from deep and pitched in four assists.